Malaysia maps out the future of Islamic finance

Malaysia is a global hub for Islamic finance, in terms of government and regulatory support and market innovation. But some participants argue the market's development beyond the country's borders has not been as rapid as hoped. A new Islamic fund and wealth management blueprint launched by the Securities Commission Malaysia in early 2017 could pave the next growth path for the sector, however.

"We are currently giving greater attention to the Islamic fund and wealth management segment," said Ranjit Ajit Singh, the chairman of the commission. "We would like to see greater growth and are working with the industry and other policymakers to further develop this area." 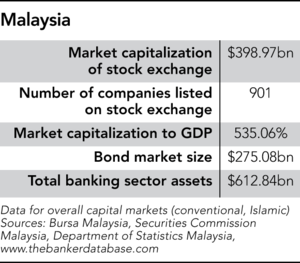 HOPING FOR MORE There are now 20 fully fledged Islamic funds in Malaysia. According to Singh, the decision of the Employees Provident Fund -- the government pension fund -- to gradually allocate 45% of its investments to Sharia-compliant products could boost that number.

Several foreign funds have already entered the market. Malaysia is BNP Paribas Investment Partners' Islamic hub, and the new wealth management blueprint will further complement its activities in this sector, according to Angelia Chin-Sharpe, the fund's CEO and country head for Malaysia and Brunei.

Gerald Ambrose, CEO of Aberdeen Islamic Asset Management, sees strong potential in Islamic wealth management. "If they had a choice, I believe many Muslims would prefer to have their finances managed along Sharia lines," he said. "We are also witnessing growth in Sharia-compliant financial planning. It's a big market, here and overseas."

FOREIGN PARTICIPATION A shared goal among fund managers in Malaysia is to increase foreign investor participation. On the supply side, the sukuk (Islamic bond) market has hosted a number of debut international borrowers including Hong Kong, the U.K. and South Africa.

"Potential borrowers and issuers realize that if they opt for a Sharia-compliant product, they tap into a bigger investor pool," said Nor Shahrizan Sulaiman, deputy head of group Islamic banking at Maybank. "There will be more liquidity going forward."

But on the demand front, traction among global investors is not as strong. Ambrose points to a lack of global convergence in the interpretation of Islamic finance parameters as one cause.

Chin-Sharpe disagrees. "As portfolio managers, we can adapt to clients' different requirements and customize solutions for them," she said, adding that educating market participants can be crucial.

Furthermore, few markets are as committed to developing Islamic finance as Malaysia. "Malaysia's government plays a big role in promoting Islamic finance and works hand in hand with the regulators to understand the needs of the market players," Chin-Sharpe said. "Despite having regulations in place, we still lack market participants in order to grow the Islamic capital markets."

In an effort to increase foreign investor participation, Aberdeen Islamic Asset Management recently acquired a license in Abu Dhabi to sell Sharia-compliant products there. Meanwhile, Chin-Sharpe expects demand to grow in Brunei, which has announced a blueprint to develop its nascent capital markets, and in Indonesia, which is liberalizing Islamic investment.

SRI CONNECTION The Securities Commission believes Islamic finance can grow further by boosting SRI. "Malaysia has been assessed by the Association for Sustainable & Responsible Investment in Asia to have the biggest SRI funds segment in Asia," Singh said. "Given the touch points between Islamic finance and SRI, we are developing a Sharia-compliant SRI investment framework that we will roll out shortly." Indeed, Islamic finance calls for money to be used for the protection and preservation of society.

Malaysian sovereign wealth fund Khazanah Nasional Berhad printed the debut SRI sukuk in 2015. Now Maybank is developing a waqf (charitable trust), the Global Humanitarian Fund, which will address the current refugee crisis. Managed by Maybank, the fund will be disbursed according to articles set by a refugee council that remains undisclosed.

Malaysia's profile among global markets could grow further now that the International Organization of Securities Commissions has chosen Kuala Lumpur to host its first regional office. "The intention is to focus on capacity building, technical assistance and deepening capital markets," Singh said. "But this will also be a way to address the region's financing needs and give Asia a stronger voice in global capital markets discussions."