New CEO is Wharton alumnus and former head of US ops

TOKYO -- Nomura Holdings' decision to tap Kentaro Okuda, the former head of U.S. operations with a Wharton School business degree, as the next president and CEO suggests that Japan's largest brokerage once again will attempt to fight on the global playing field.

The renewed focus on global operations follows a bruising decade after acquiring Lehman Brothers' Europe and Middle East assets in 2008. The acquisition resulted in massive impairment losses and has been a topic of constant bickering from the domestic faction within the company.

The current chief, Koji Nagai, rose the ranks through the domestic retail section. He toned down Nomura's ambitious goal of elevating the Japanese group to be on par with Wall Street giants and focused on strengthening Nomura's operations back home.

But with those domestic retail operations struggling due to a shrinking population, the house of Nomura has little choice but to seek opportunities overseas.

Okuda had been locked in a succession race with Toshio Morita, with whom he shares the title of co-chief operating officer. Morita, once seen as the leading candidate to succeed Nagai, has been in charge of Nomura's domestic operations.

The ascension of Okuda, the head of offshore operations, sends an unmistakable message that Nomura is intent on expanding its overseas and corporate segments after years of an inward-looking focus on domestic operations. 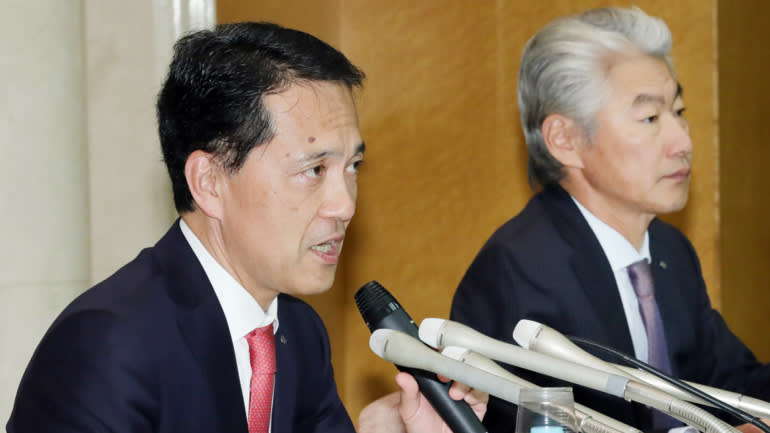 Kentaro Okuda, left, will take over as CEO of Nomura Holdings on April 1, succeeding Koji Nagai, seated next to him, who will become chairman. (Photo by Yuki Nakao)

Nomura announced Monday that Okuda will take over in April, with Nagai to become board chairman.

"As the players in the financial business continue to change, I wish to speed up reforms at Nomura," Okuda said at a news conference Monday.

Okuda, 56, joined Nomura in 1987 after earning an economics degree from Keio University in Tokyo.

Nomura promoted Okuda in 2017 to head the group's American operations. There, he swiftly cut jobs and reorganized operations to keep pace with market shifts, such as the rise of derivatives.

Okuda was called back to Japan this year to face the challenge of restructuring units in Europe and the U.S. as deputy president.

Nomura's Lehman acquisition in 2008 resulted in a massive impairment loss during the fiscal year ended this past March. Trading operations acquired in the deal struggled to generate returns as well.

Thanks to favorable market conditions, the restructured U.S. and European operations returned to profitability. On Monday, Okuda relayed plans to pivot the offshore business away from securities sales, marked by high risks and high returns, and toward development and sales of financial instruments with relatively low-risk profiles. Nomura will concentrate on corporate services as well, such as support procuring funds.

Okuda will also be busy rebuilding the flagging domestic retail business, once Nomura's bread and butter.

In fiscal 2012, when Nagai first stepped in as CEO, the segment posted a profit of 100.6 billion yen (about $918 million at today's rates). The figure had fallen by half to 49.5 billion yen in fiscal 2018. For the first half ended in September, the black ink came to around 13 billion yen.

These numbers have dragged down Nomura's market value. Its market capitalization topped 3 trillion yen at one point during Nagai's tenure, but now hovers below 2 trillion yen.

One of the main hazards Okuda will face involves the tech industry. "We are competing with internet technology as well," he said Monday. "We are gripped by a sense of crisis."

The issues Okuda raised with the domestic business are manifold. He touched on how to leverage digital technology, as well as expanding the customer base. Nomura recently established an internet brokerage with chat app provider Line called Line Securities.

Okuda, however, has no experience in the retail segment, which is a subject of concern in some corners.

"It's the leader's responsibility to set the future direction for the company," Okuda said. "Management is done through teamwork," which means Okuda "never had any concerns" about his lack of retail experience.