Nikkei Asia has compiled the 2020 earnings of 16 big listed commercial banks in Indonesia, Malaysia, the Philippines, Singapore and Thailand. Their combined net profit for the year was $19.4 billion, down 34% from 2019 and their worst collective result since 2011. Their total nonperforming loans (NPLs) rose 17% to $39.6 billion, the highest in at least a decade.

While Southeast Asia's economy is starting to rebound, analysts warn that bad loans will swell further this year as governments begin withdrawing financial support. This is a key downside risk for the banks, along with prolonged low interest rates and the emergence of feisty fintech challengers.

Among the 16 banks, the fastest growth in bad loans was recorded at Philippine lenders. Sour debt at two banks, BDO Unibank and Metropolitan Bank & Trust Co., jumped 120% in 2020. Extended lockdowns caused the economy to shrink a record 9.5% last year, the worst among the five countries in the survey, with thousands of businesses, many of them small enterprises, shutting down.

BDO Unibank, the largest lender in the country by assets, said its nonperforming loan ratio climbed to 2.65% last year, more than double the 1.20% ratio of 2019. The jump was driven "mainly by consumer loans coming from mortgages and auto loans," the bank said in emailed comments to Nikkei.

Businesses battered by the pandemic also missed loan payments. "Apart from consumer loans, other vulnerable sectors were the tourism [and] travel-related industries and SMEs [small and medium enterprises]," BDO said. 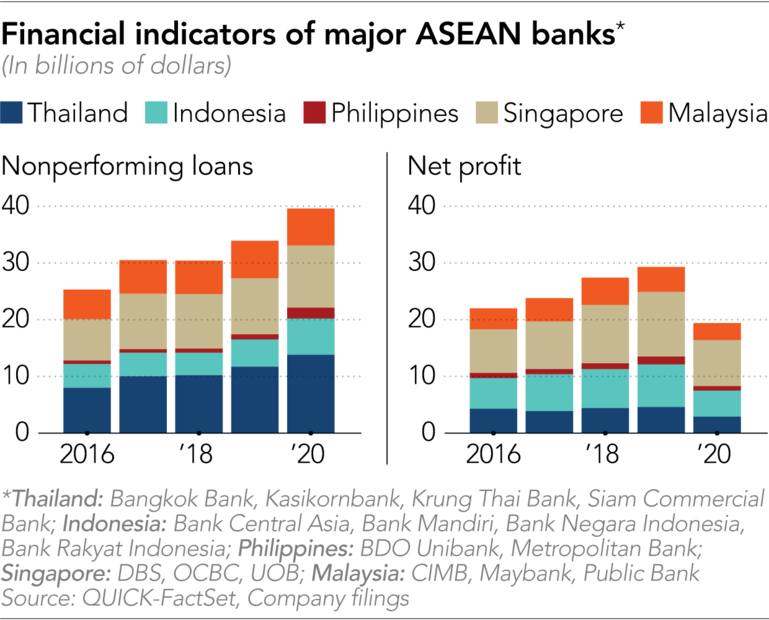 Thailand's large lenders saw business conditions worsen due to their exposure to tourism, with three of the top four banks reporting an increase in bad debts last year. Their nonperforming loan ratios were high, ranging from 3.68% to 3.93% as of December.

Thailand's gross domestic product declined 6.1% in 2020. Many businesses, particularly small and mid-size businesses in the tourism and export sectors, suffered, sapping their creditors' profitability and pushing up their bad debt ratios.

Thai banks lent about 400 billion baht ($13 billion) to the tourism sector in 2020, according to Suwannee Jatsadasak, senior director of the Bank of Thailand's regulatory policy department. At the central bank's direction, commercial banks were asked to set up debt moratorium measures for small and medium-size businesses with credit lines of less than 100 million baht that were having trouble servicing their debts.

The measures, which are set to expire in June, will not stop Thai banks' loan quality from worsening, specialists say. "In our opinion, temporary relief measures are unlikely to eliminate risks for weaker and more vulnerable debtors, although they may lessen the strain and delay recognition of problem loans," said credit agency S&P Global Ratings. "We expect banks' asset quality to deteriorate in the next 12 to 24 months and the [bad loan] ratio to increase up to 6%," the ratings agency said.

The Thai central bank is not as pessimistic about the outlook for the country's banks as S&P, but it does spy risks. According to Suwannee, loans with a significant increase in credit risk jumped to 6.6% of total lending as of December 2020, up from 2.8% the previous year. "That's what we have to monitor. If banks continue to help them, they won't become NPLs. If not, they might," she warned.

Large Thai banks expect a further deterioration in asset quality this year. Bangkok Bank forecasts its NPL ratio will reach about 4.5% by the end of 2021, up from 3.9% from the same period last year. The NPL ratios of Siam Commercial Bank and Kasikornbank are expected to climb to a range of 4% to 4.5%. Tuk-tuks that used to take tourists around Bangkok sit idle amid the COVID-19 pandemic, which has clobbered small and medium-size enterprises in Southeast Asia's tourism sector.   © Reuters

In Indonesia, where the economy shrank 2.07% in 2020, nonperforming loans at the four big banks rose 33% from a year earlier. State-owned Bank Negara Indonesia, the fourth-largest bank by assets, saw its bad loan ratio jump to 4.2% last year from 2.33% in 2019. Nonperforming loans rose across the board: Those to manufacturers, which account for 33% of the bank's total, rose 132%, while those to traders, restaurants and hotels, 28% of the total, soared 151%.

BNI CEO Royke Tumilaar said that it "projects the NPL ratio this year to fall under 4%," with economic conditions improving. Additionally, he said the bank has been "working on improving credit and risk management" since last year, and the effects will "start to show" this year.

Meanwhile, Singapore's DBS Holdings, Oversea-Chinese Banking Corp. and United Overseas Bank had nonperforming loan ratios in the 1.5% to 1.6% range as of the end of last year, a slight increase from 2019.

The city-state's loan moratorium measures have helped local lenders in the country keep those ratios relatively low, said Tay Wee Kuang, a research analyst at financial services provider PhillipCapital. "Apart from that, the government's support to [small and mid-size businesses] or companies that [were] undergoing stressful periods over the last year, must have helped them sufficiently, such that the borrowers [were] able to tide through," he told Nikkei.

Compared with their peers in neighboring counties, Singapore's banks lend to larger corporations, which have generally fared better in the pandemic than small business.

Nevertheless DBS steadily ramped up its loan-loss buffers, expecting more bad debts as customers run into difficulty meeting their repayment obligations in the coronavirus-driven downturn. OCBC and UOB have also added to their loan-loss reserves, pressuring their profits. 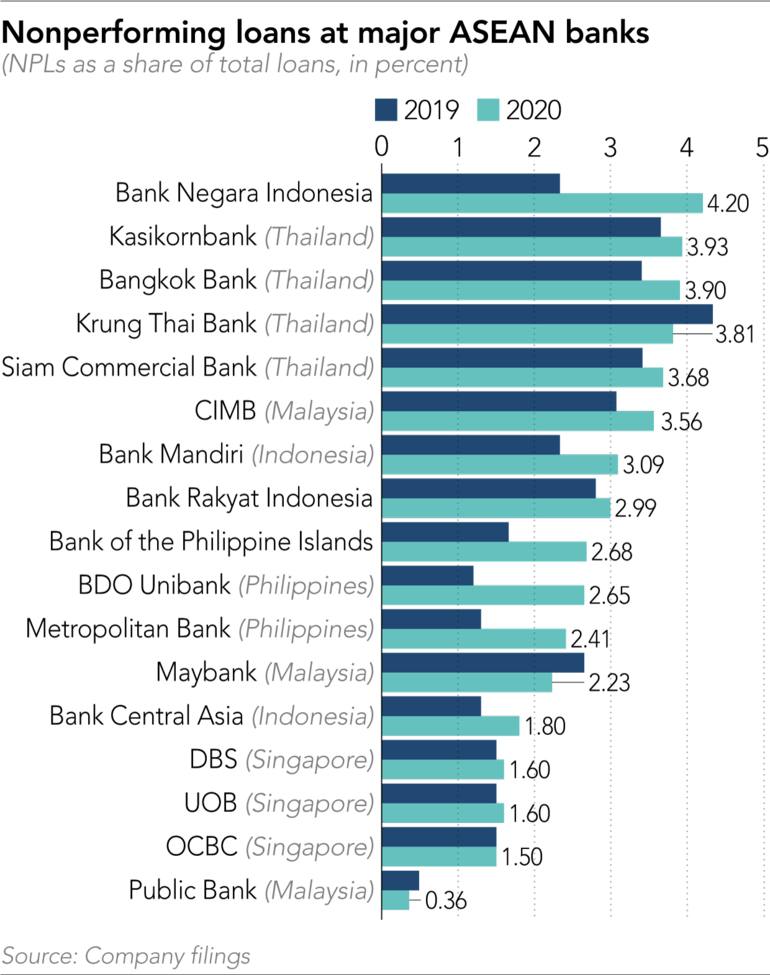 Neighboring Malaysia managed to buck the regional trend, with total bad loans at its three major banks falling 1.5% from the previous year. Malayan Banking, or Maybank, reported an NPL ratio of 2.23% as of December, versus 2.65% a year earlier. The bank attributed that to proactive provisioning, though it also said it will "remain cautious on potential asset-quality slippages, given uncertainty over economic recovery trajectory for some key markets."

The bad debt ratios for the banks in the five countries ranged between 0.36% and 4.2%. "Generally, asset quality has come out to be better than initially feared in 2020," Thilan Wickramasinghe, an analyst at Maybank Kim Eng told Nikkei Asia.

"But there remains significant tail risk," he said. "In countries such as Indonesia and Thailand, a significant proportion of loans remain under moratoriums or restructuring. This creates shadow asset quality risks with limited visibility on how some businesses will perform when they emerge from these moratoriums."

Wickramasinghe also pointed out that there are risks of further lockdowns, more virulent COVID strains and delays in vaccine deployments that need to be watched. "Asset quality should see further deterioration in 2021, depending on the speed of economic reopening," he said.

Along with COVID-related risks, the region's banks have faced other challenges, including new competitors. ASEAN's biggest tech players, including Singapore's Sea and Grab, are expected to launch digital banking services early next year in the country, which could take a bite out of incumbents' market share.

Additional reporting by Shotaro Tani in Jakarta and Kentaro Iwamoto in Singapore.