SINGAPORE -- The trio of banks that dominate Singapore's financial sector are preparing their defenses against an influx of digital lenders, as the city-state puts itself at the forefront of the fintech revolution in Southeast Asia.

DBS Group Holdings, Oversea-Chinese Banking Corp. and United Overseas Bank are intimately connected to Singapore's stellar growth following its independence in 1965 and their acronyms are familiar to generations of customers.

But the cozy relationship between the banks and their clients is about to change. By year's end, the Monetary Authority of Singapore is expected to award licenses to new digital lenders who will challenge the status quo. The winners could even be announced next week, when Singapore holds its annual fintech festival.

The change will let nonfinancial institutions vie for a slice of the country's banking market, worth almost $2 trillion. The central bank's stated purpose in issuing the new permits: to create a "resilient, competitive and vibrant" industry.

A range of local and overseas fintech and internet giants, including China's ByteDance -- owner of video-sharing platform TikTok -- and Alibaba Group Holding's Ant Financial, have entered into partnerships to bid for five virtual banking licenses.

Singapore is one of the first countries in the Association of Southeast Asian Nations, or ASEAN to issue such permits. The Philippine central bank, Bangko Sentral ng Pilipinas, on Nov. 26 said it will also allow such banks to be set up.

Worldwide, the number of "neobanks" competing in the virtual space has grown at a compound annual rate of 27% to more than 200 since 2010, with a fifth based in the Asia-Pacific region, according to a report published in November by the Singapore FinTech Association.

The report noted incumbent local lenders together hold a 63% share of the market for loans -- a commanding lead that could shrink if new digital players make inroads in the city-state by offering virtual services that promise a seamless experience.

"This experience of remote, convenient, easy-to-use and consume 24/7 services is now the expectation of consumers from banking," said Mohan Veloo, vice president for global solutions engineering at F5, a cloud services provider. "This has led to digital transformation being a top priority for Singapore's banks in recent years."

Indeed, the incumbents have tried to "self-disrupt," evolving into digitally focused lenders by pouring billions of dollars into technology. Singapore's legacy lenders have come under increasing pressure to transform their operations as the current low interest rate environment and the COVID-19 pandemic dampen their earnings prospects.

The banks saw their net profits fall between 12% and 40% on the year for the three months ended September, weighed down by the health crisis and bad loan provisions as many companies had difficulty meeting payment obligations.

DBS, OCBC and UOB have pledged to make digitalization a core part of their business transformation efforts and are spending a lot of cash to do it. DBS, the biggest of the three and Southeast Asia's largest lender, has spent 4.4 billion Singapore dollars ($3.3 billion) over the last four years on technology. It has been working to integrate tech into its business far longer, introducing internet banking in 1997.

In September, DBS, said it was tapping artificial intelligence and big data to beef up its virtual offerings. It hopes predictive technology will allow it to proactively offer suggestions to customers on how to more effectively manage their money or cut losses on investments. DBS is not the only legacy lender in Asia using tech to boost its capabilities. HSBC in Hong Kong uses AI to plan the distribution of cash to ATMs, while Standard Chartered Bank has adopted biometrics to give customers access to its digital systems in markets such as Malaysia and India. In Thailand, Siam Commercial Bank, the country's third-largest bank by assets, has worked to close branches and cut staff as it pivots to mobile banking.

"Big tech [companies have] the advantage of predicting how customers will act online from the massive amounts of data available," Victor Orlovski, Managing Partner at venture capital firm Fort Ross Ventures, told Nikkei Asia. To transform effectively, incumbent players need to bring on specialists with technological know-how to build the digital products and experiences consumers have come to expect in the virtual era, Orlovski said.

DBS has approached this challenge by collaborating with cloud computing provider Amazon Web Services to help sharpen its staff's skills in AI and machine learning. More than 3,000 DBS employees, including senior executives, will be trained in the new technologies by the end of the year.

"Everything has to be hyper-personalized," said Sim S Lim, group head of consumer banking and wealth management at DBS. "There are a lot of things that we know about you -- to help you think through, and help you ... plan for retirement -- to help you do many, many things. And this is where this is going to differentiate what a great bank is, versus what a good bank is."

But the road to digitization has not always been smooth. DBS has pursued a digital banking focus in India, as well with a mobile app, and is set to grow there by taking over ailing lender Lakshmi Vilas Bank under a plan proposed by the Reserve Bank of India, the central bank. 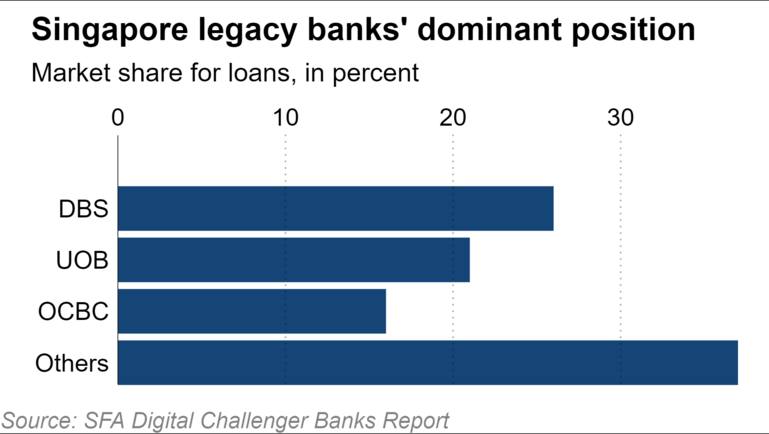 Jefferies analyst Prakhar Sharma noted in a report that as a result, DBS will be the largest foreign bank in the country in terms of the number of branches, which showed that "DBS Bank India's digital banking strategy may not have yielded sufficient success, hence the need to acquire branches."

In Singapore at least, the lender's digital efforts have gained considerable traction during the pandemic. DBS reported a surge in virtual banking engagements between January and May -- transactions on its retail digital platform surged 220% on the year, with transactions on its wealth management system jumping 198%.

Local rival OCBC has seen similar growth. The lender said eight in 10 of its digitally active customers bank on their mobile phones, and more than 90% of its financial transactions by volume in Singapore are performed virtually, with such transactions rising 20% on the year.

OCBC offers virtual wealth advisory services to allow customers to do their financial planning remotely without having to come to a bank branch.

The bank told Nikkei that not including labor costs, it commits about 12% of its total expenses to technology. Based on the lender's financial reports, that potentially came to more than SG$200 million in the six months to September.

Still, the bank maintains some traditional practices. And it has had virtual assistants, such as an AI-powered "chatbot" to tend to customers for a while. "We believe that the human touch, digitally aided, is critical for certain financial interactions, and we are progressively enabling our financial consultants to advise people remotely over phone and over video," said Pranav Seth, head of digital and innovation at OCBC.

In 2018, the third of the three big Singapore banks, UOB, announced that it invested in and partnered Israel-based fintech Personetics to boost AI-based solutions offered to its customers.

"Given the advances in AI, machine learning and data analytics, we will use Personetics' tools to deepen our understanding of customer behavior, and to design more innovative, responsive and responsible digital banking services," said Dennis Khoo, head of regional digital bank and strategic initiatives at UOB at the time the initiative was revealed.

The lender told Nikkei that from 2014 to 2019, it invested SG$2 billion "to ensure the quality and robustness" of its digital infrastructure. In July, it launched a "robo-adviser" that helps customers structure investment portfolios based on their risk profile and financial goals.

In Thailand last year, UOB launched TMRW, a digital bank, which was followed by another launch this year in Indonesia in August. Within the two ASEAN markets, TMRW taps AI and data analytics to help consumers meet personal savings targets.

S&P Global Ratings' Credit Analyst Ivan Tan noted in a report this year that while new virtual banks may have less room to dislodge incumbents, the legacy lenders also have to contend with maintaining physical infrastructure, such as branches, which the new digital players do not have to deal with.

"The big Singapore banks that began their digital journey several years ago have yet to demonstrate significant cost savings or [an] income boost," Tan said in the report. "For now, the profitability and efficiency ratios of the Singapore banks we rate have remained flat, and they have largely retained [their] existing traditional infrastructure."

The incumbents' digitization has also seen them take on characteristics of the fintech upstarts. For instance, DBS, OCBC and UOB have services such as digital wallets that are akin to what nonbank players like super app developer Grab, telecom company Singtel and Chinese smartphone maker Huawei have created.

For the legacy lenders, the e-payments landscape in the region has become increasingly crowded, with tech outfits vying for attention alongside traditional banks.

In a report issued in November, Moody's Investors Service said the outlook for traditional lenders in the Asia-Pacific was favorable, compared with that for new digital players. The COVID pandemic is helping legacy banks accelerate their transformation efforts.

Tae Jong Ok, assistant vice president at Moody's, noted that in the region, incumbents planned to maintain or raise investment budgets for digitization, even in the face of weakening profitability, with digital platforms likely to become increasingly integrated into mainstream banking.

"In this evolving competitive landscape, we expect large banks with sizable investment budgets stand to gain, while neobanks with still-untested franchises and smaller traditional banks with limited resources face a more testing environment."