SINGAPORE -- Plunging prices for commodities and the ongoing slowdown of the Chinese economy were common headaches among financial institutions in Southeast Asia last year. Despite concerns about the rise of bad loans and slower loan growth, all but three of the 15 banks in ASEAN 100 managed to expand their profits in 2014.

The three largest Singaporean banks shined brightest in the region. Their combined profit growth for the year was a stellar 17.9%, backed by bullish approaches to regional markets. Oversea-Chinese Banking Corp. led the pack, with profit expanding by 39% -- the largest profit growth among all ASEAN 100 banks -- following the acquisition of Hong Kong's Wing Hang Bank last year. "Greater China now surely has become a main contributor and will bring long-term value for OCBC," said CEO Samuel Tsien at a press briefing. 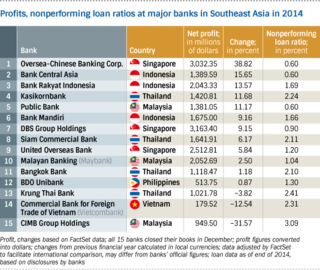 Although net profit growth for the three banks in the city-state, including United Overseas Bank, continued in the first three months of 2015, they are beginning to feel the pinch of China's economic slowdown. "There is no question of overhang in some sectors [in China]," DBS CEO Piyush Gupta admitted at a press conference for its first quarter earnings.

Regional business was a key driver for neighboring Malaysia's largest lender, Malayan Banking (Maybank), as well. Its net profit grew 2.5% to a record-high level last year. The group's loans swelled 14.4% due to robust mortgages in Malaysia and Singapore.

This year, Maybank projects a return on equity to be almost on par with 2014, but lending growth is expected to slow down to 10% from last year's 13.4% due to tighter consumer spending after implementation of goods and services tax in April.

Indonesia's top private lender, Bank Central Asia, recorded 16% profit growth in 2014, the second-highest among the 15 ASEAN 100 banks, behind only OCBC. The two largest state-owned lenders, Bank Mandiri and Bank Rakyat Indonesia, also saw their net profit rise. But for all three banks, growth rates have slowed and their nonperforming loan ratios have risen over the year.

Indonesia's economic growth slumped to a five-year low in 2014. BCA President Jahja Setiaatmadja told local media that the bank will not push itself to achieve its double-digit loan growth target if the economy remains weak.

Banks in Thailand had to face political instability that dragged on until mid-2014. The country's four largest banks, including Bangkok Bank and Siam Commercial Bank, posted only 4% growth in profit in 2014, compared to double-digit growth in 2013. Nonperforming loans increased as cash flow of small and midsize enterprises were hit by an economic slowdown in which real gross domestic product expanded less than 1%, exacerbated by the country's household debt level rising to 82% of nominal GDP.

Bad retail loans will likely remain a risk for Thai banks for a while. State-owned Krung Thai Bank's net profit for the first three months of 2015 dropped 5.2%, partly on a 24% jump in loss provisions for nonperforming loans.