SINGAPORE -- Southeast Asia's largest lender, DBS Group Holdings, on Wednesday reported a 33% year-on-year drop in net profit for the three months ended December, as pressures from the COVID-19 pandemic forced the bank to continue building reserves against the risk of poor-quality assets.

DBS booked a net profit of 1.01 billion Singapore dollars ($760 million) for the period, compared with SG$1.51 billion the previous year, barely breaking the billion-dollar mark in local currency terms. In earlier quarters it did so with relative ease.

That was the worst profitability showing for DBS in more than two years, as the lender set aside allowances for nonperforming loans to the tune of SG$577 million, nearly five times higher than the year-ago period, bringing full-year provisions to SG$3.07 billion.

As the coronavirus health crisis drags on, DBS has steadily increased its loan-loss buffers in anticipation of bad debts, with customers struggling to service their debts in a deteriorating global economic climate.

"The uncertainty around the virus and the pandemic is hard to control," said DBS chief executive Piyush Gupta in an earnings briefing on Wednesday. "You can see that if the pandemic gets out of control, we will start seeing a slowdown right away," he added. 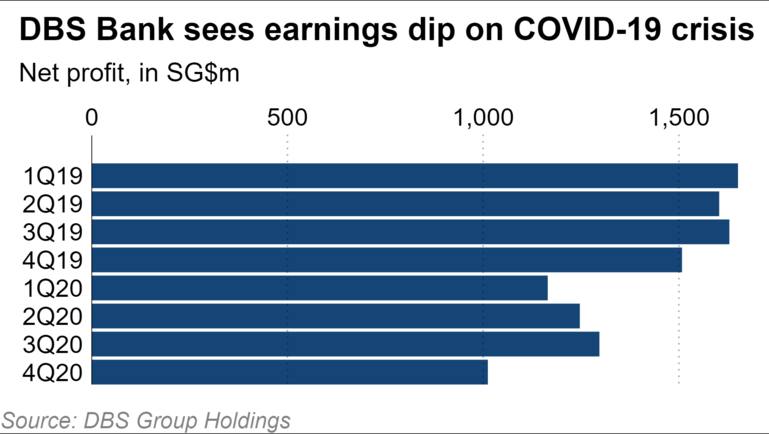 While COVID vaccines are making their way gradually into populations, infections have continued surging across countries, with concerns rising over the emergence of more infectious variants of the disease.

For DBS, the uncertainty extends to beyond its key home market to markets overseas. General allowances, or the buffer set aside in anticipation of losses, amounted to SG$87 million for ailing Indian lender Lakshmi Vilas Bank, which DBS took over in the final quarter of 2020.

DBS is betting on the growth potential of overseas markets to supplement its Singapore income, but headwinds elsewhere have made progress slow. Provisions for Hong Kong, DBS' biggest contributor to profitability outside the city-state, were expanded to SG$175 million in the second half of 2020, more than double the SG$79 million it held in the same period the year before.

In all, Gupta expects total allowances built up over 2020 and 2021 to be between SG$3 billion and SG$5 billion, but still he believes conditions this year will improve with an anticipated economic recovery. "I'm certainly feeling more optimistic about the overall quality of the [DBS] portfolio and asset conditions now than I was able to tell you three months or six months ago," he said during the briefing.

That assessment was echoed by Eugene Tarzimanov, senior credit officer at Moody's Investors Service. "We expect credit costs to decrease in 2021 as DBS has already completed the bulk of provisioning, with asset risks receding and economic conditions improving," Tarzimanov said.

However, the current low-interest rate environment has been a drag on the bank's profitability, with its net interest margin -- the difference between the interest it charges on loans versus that paid to depositors -- falling 13% year-on-year to SG$2.12 billion in the last quarter.

Being the largest lender from the Association of Southeast Asian Nations, DBS' performance is seen as a bellwether for financial institutions in the region. Local rivals Oversea-Chinese Banking Corp. and United Overseas Bank are expected to fare similarly, with the two set to submit earnings reports around the end of February.