JAKARTA -- HM Sampoerna, an Indonesian cigarette maker, had a market capitalization of 306 trillion rupiah ($24.8 billion), based on its closing price of Dec. 5. That gave it the Indonesia Stock Exchange (IDX)'s second-largest cap. But since less than 2% of its shares are available to the public -- parent Philip Morris Indonesia owns all the others -- investors hardly have a chance to trade in the company's stock.

The IDX wants this state of affairs to change. Earlier this year, it issued a regulation requiring listed companies to float 7.5% of their paid-up capital to the public. But it gave companies until January 2016 to comply, and so far companies like HM Sampoerna have not budged. 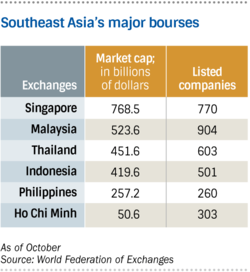 The IDX is not alone among exchanges in Southeast Asia trying to boost trading. While most of the region's stock markets have enjoyed surging caps over recent years, they still lag far behind their counterparts in developed countries. Southeast Asia's six major stock exchanges have a combined 3,000-plus listed companies, but their combined market value -- $2.4 trillion as of October -- is a little more than 10% of the value of the New York Stock Exchange, which has about 2,500 listings.

A major issue for investors who place bets on Southeast Asian stock markets is a lack of diversity. Most exchanges have a small number of companies that account for most of the market cap. These companies are often concentrated in a few industries.

On Bursa Malaysia, about 40% of the top 100 listed companies are so-called GLCs, or government-linked companies, in which the government indirectly holds a controlling stake. Foreign asset managers in Indonesia have complained that there are few opportunities to get the country's rising middle classes to invest in stocks; there simply are not enough consumer-related stocks with sufficient market caps.

Index futures and other derivatives, which are crucial in managing risk, are also lacking on most exchanges. Investors "are looking for more issues [products], so it is easy for them to enter and exit," said Luis Limlingan, managing director at Manila-based brokerage Regina Capital Development.

Regulation is another bottleneck. Short selling, a technique traders use when they expect prices to fall, is tightly controlled or banned in most of Southeast Asia. And regulations generally cap foreign ownership of most indigenous companies. A Filipino company can only have 40% of its shares in the hands of foreigners; in Thailand, the ceiling is set at 49%.

Yet bourses are actively pursuing foreign money. The Stock Exchange of Thailand in 2015 plans to launch U.S. dollar-denominated products for stock and derivatives transactions, easing the task of managing currency risk. The IDX and the Philippine Stock Exchange have listed exchange-traded funds, which track the performance of the benchmark stock indexes, enabling foreign investors to make safer bets.

Listing big-name companies is another focus. Singapore Exchange (SGX) has the biggest market cap in Southeast Asia. It has gained this stature by attracting foreign companies, which now account for nearly 40% of its 770 listings.

But the SGX has recently suffered a couple of systems failures that halted trading. Trading on the bourse had already been slowed by the "penny stock crash" in October 2013, when a sudden plunge of three companies wiped out almost 8 billion Singapore dollars worth of market value in three days. The SGX has since announced plans to downsize its minimum purchase lot from 1,000 to 100 shares, making a wider range of stocks available to retail investors.

Stock exchanges in the region are moving fast as the 10-member Association of Southeast Asian Nations integrate into the ASEAN Economic Community. The intention is to figuratively erase borders so as to boost economic activity.

There are also discussions to create a regional stock market by linking the exchanges of Singapore, Indonesia, Malaysia, Thailand, the Philippines and Vietnam. The idea is to enable investors to buy shares from one exchange and sell them on another. This may persuade companies to list on the most vibrant exchanges.

"If (the linkage) is implemented," said Michael T. Tjoajadi, CEO for Schroder Investment Management Indonesia, the country's largest asset manager, "it will be positive for investors."

But for Indonesia itself, Tjoajadi added, "we don't know."

Nikkei staff writers Mayuko Tani in Singapore, Cliff Venzon in Manila and Yukako Ono in Bangkok contributed to this story.