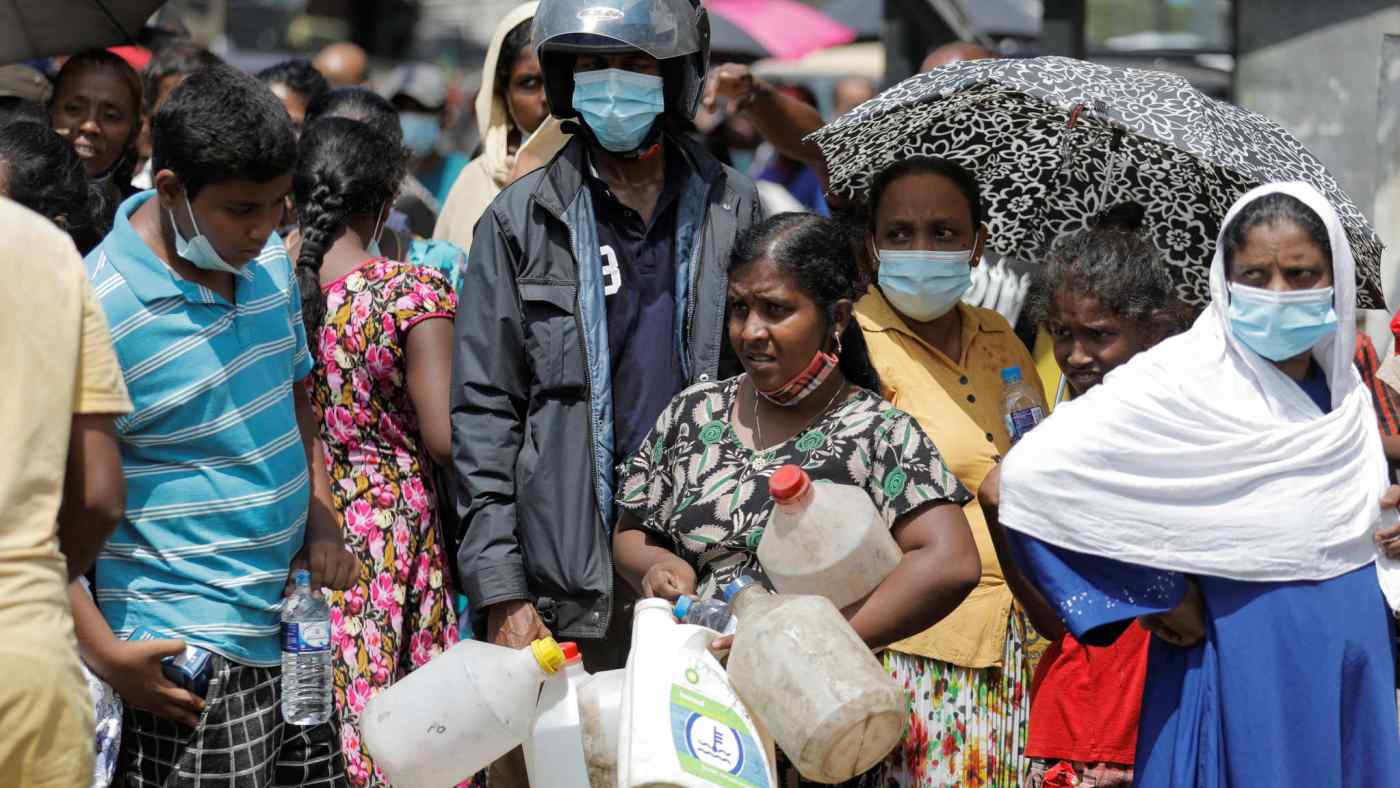 COLOMBO (Reuters) -- Sri Lanka's central bank doubled its key interest rates on Friday, raising each by an unprecedented 700 basis points to tame inflation that has soared due to crippling shortages of basic goods driven by a devastating economic crisis.

The heavily indebted country has little money left to pay for imports, meaning fuel, power, food and, increasingly, medicine are in short supply.

Street protests have been held nearly non-stop for more than a month, despite a five-day state of emergency and a two-day curfew.

It cited "inflationary pressures that could further intensify... driven by the build-up of aggregate demand, domestic supply disruptions, exchange rate depreciation and the elevated prices of commodities globally". Inflation hit 18.7% in March.

An analyst had expected hikes of up to 400 basis points.

"With the monetary policy tightening now finally clear, the stage is set to take the next vital steps with regards to IMF and debt restructuring and clearly communicate this to the international stage," Panduwawala said.

Finance Minister Ali Sabry said earlier that the country must urgently restructure its debt and seek external financial help, while the main opposition threatened a no-confidence motion in the government and business leaders warned exports could plummet.

"We cannot step away from repaying debt because the consequences are terrifying. There is no alternative, we must restructure our debt," Sabry told parliament.

J.P. Morgan analysts estimate that Sri Lanka's gross debt servicing costs will amount to $7 billion this year, with a $1 billion repayment due in July.

"We have to go for a debt moratorium," said Sabry, who offered to quit a day after he was appointed on Monday but later confirmed that he was still finance minister.

"We have to suspend debt repayment for some time and get bilateral and multilateral support to manage our balance of payments."

President Gotabaya Rajapaksa is running his administration with only a handful of ministers after his entire cabinet resigned this week, while the opposition and some coalition partners rejected calls for a unity government to deal with the country's worst crisis in decades.

At least 41 lawmakers have quit the ruling coalition to become independents, though the government says it still has a majority in parliament.

"The government needs to address the financial crisis and work to improve governance, or we will move a no-confidence motion," Sajith Premadasa, leader of the Samagi Jana Balawegaya opposition group, said in parliament.

Sabry, a former justice minister, said political stability was necessary as the country prepared to start talks with the International Monetary Fund (IMF) this month.

Earlier on Friday, nearly two dozen associations, representing industries that collectively employ a fifth of the country's 22 million people, together urged the government to quickly seek financial help from the IMF, the World Bank and the Asian Development Bank (ADB).

"We need a solution within weeks or the country will fall off the precipice," Rohan Masakorala, director-general of the Sri Lanka Association of Manufacturers and Exporters of Rubber Products, told a news conference.

Masakorala said that both merchandise and service exports could drop 20%-30% this year due to a dollar shortage, higher freight costs and power cuts.

Sri Lanka's foreign exchange reserves have plunged some 70% in the past two years, hitting $1.93 billion at the end of March.