SHANGHAI -- A Chinese financial bomb was recently defused at the last moment, but many fear it is a matter of time until one of the nation's investment products goes boom. 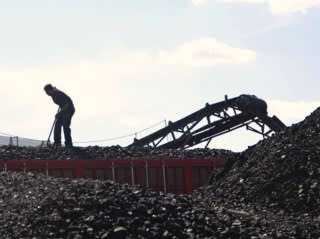 A worker toils at a coal mine in the Inner Mongolia Autonomous Region. The money Chinese individuals invest in wealth management products often goes toward financing resource, infrastructure and other projects.

China's shadow banking sector -- made up of intermediaries that sell financial products -- is vast and continues to grow. The sector's bread and butter, so-called wealth management products, promise high returns to Chinese individuals constrained by capital controls. Yet investors' cash is frequently funneled into other investments, such as real estate, which may or may not perform well.

The worry is that one of these days, a big wealth management product will default, with the shock wave spreading worldwide. Many see the hallmarks of the subprime-mortgage-backed securities mess in the U.S., a key trigger of the global financial crisis that hit in 2008.

Late last month, the world came perilously close to finding out whether the analogy is apt. Credit Equals Gold No. 1, a wealth management product administered by a company called China Credit Trust, was scheduled to mature on Jan. 31. And it appeared a bust was in store.

The trust had been sold through the Industrial and Commercial Bank of China, attracting roughly 3 billion yuan ($495 million) from some 700 investors. A 25-year-old man in Shantou, Guangdong Province, put in about 3 million yuan; he recalled being dazzled by the sales pitch he had heard at a local ICBC branch.

So what happened? China Credit loaned the 3 billion yuan to Shanxi Zhenfu Energy Group, a coal miner in Shanxi Province. Zhenfu Energy effectively collapsed, raising the possibility that the 700 investors would lose their money.

The sweating over the trust last month exacerbated a flight of capital from emerging markets, undermining those economies. The specter of a financial panic loomed. Chinese short-term interest rates spiked Jan. 20 as banks and high rollers hoarded cash to prepare for the possibility of a default at the end of the month. The third party agreed to buy all outstanding tranches of the troubled product at par, allowing the investors to recover their principal. Still, the motive is unclear -- Zhenfu Energy's fall means Credit Equals Gold No. 1 is virtually worthless.

There is a lot of speculation that the rescue was orchestrated by the Chinese government. The last thing Beijing wanted, the theory goes, was a default around the Lunar New Year holidays.

Despite the apparent dangers, wealth management products continue to attract investors. Who can blame them: While one-year time deposits at banks pay, at most, 3.3% interest, the shadow instruments generally promise annual yields of 9-11%.

Banks, when marketing the investment trusts, often assure clients that the products have never caused problems in the past. While true, the fact is that channeling the money into other companies and infrastructure projects was safer back when the Chinese economy was growing at breakneck speed. Things are more uncertain amid the current slowdown.

Another motivation to buy into wealth management products is that investors just do not have many options.

Chinese individuals cannot freely purchase foreign investment instruments. Bitcoin, the virtual currency, has been a huge hit in the country precisely because it allows for making speculative bets online. At one point, a Bitcoin exchange in Shanghai accounted for slightly more than 40% of the cryptocurrency's global trading volume. But late last year, Chinese authorities moved to quell the Bitcoin craze by barring financial institutions from dealing in the currency, clouding the market's outlook.

Investment trusts remain one of the few readily accessible tools for earning more than bank deposit rates. The rise of wealth management products has much to do with citizens' desire to maximize their money, coupled with businesses' and local governments' strong demand for financing funded by the products.

How big is the wealth management product market? Among products sold through banks alone, outstanding assets are up to roughly 9.9 trillion yuan. As of the end of last March, the aggregate asset value exceeded that of all insurance products combined.

That huge market is now triggering flashbacks of the subprime debacle. Standard & Poor's, the U.S. credit rating agency, has warned that numerous Chinese investment products are likely to get into trouble this year.

Investment management companies and Chinese authorities cannot simply absorb loss after loss. If the clock does run out on a major wealth management product, the heat could spread far and wide.