Shariah-compliant microfinance and fintech are taking off across Asia JAKARTA/SINGAPORE Early one August morning, before the heat became unbearable, several dozen people gathered in a courtyard in the Indonesian village of Kasaman, not far from Jakarta. They were there to repay debts -- and simply to be seen.

"Everyone, please check the details of your contracts." Seated before the crowd of mostly women, the staff of BTPN Syariah shouted instructions. The Islamic bank hosts similar meetings across the country: Residents who take out small loans under Shariah-compliant microfinance arrangements gather every two weeks to make payments in front of their neighbors.

The borrowers repay the principal plus 30% annually. This is high compared with conventional loans, but the customers do not need to put up collateral. "The collateral is a face," said Ratih Rachmawaty, BTPN Syariah's president director. "They need to show their faces to us biweekly." Fatmawati borrowed from BTPN Syariah to support her sewing business.

Microfinance services like this are part of a new wave of Islamic finance in Asia, home to growing Muslim populations and rising economies. It is a wave big banks and small startups alike are rushing to catch.

START SMALL Technically, Islamic banks avoid charging interest, which is forbidden under Shariah, or Islamic law. Their operations are jointly financed with borrowers, and any profits are split with the borrowers. Moreover, the institutions cannot invest in industries considered taboo, such as alcohol or pornography.

But this tradition-bound segment of finance is also embracing two new pillars -- microfinance and fintech services, such as crowdfunding.

In largely Muslim Indonesia, a country of more than 13,000 islands where some 50-60% of adults do not have bank accounts, Islamic microfinance is starting to fill the gap. As of the end of 2016, BTPN Syariah had around 2.58 million microfinance customers. Its loan balances totaled some 5.8 trillion rupiah ($430 million) as of September.

That equates to around 9% of the total consolidated lending of its parent, Bank Tabungan Pensiunan Nasional -- a conventional institution in which Japanese megabank Sumitomo Mitsui Financial Group holds a 40% stake.

Around 1.7 million of BTPN Syariah's microfinance customers make deposits and transfer money via cellphones, suggesting the bank is reaching remote areas where branches are few or nonexistent. Borrowers like those in Kasaman typically create groups, usually of five, to draw funds; if one individual falls behind on payments, another picks up the slack.

Fatmawati, a mother of three who runs a sewing business out of her home on the outskirts of Jakarta, borrowed 20 million rupiah from BTPN Syariah to cover materials and other operating expenses. Her seven employees make and sell uniforms for Islamic boarding schools using half a dozen sewing machines. "Right now, we're hard-pressed to turn out 50 skirts and 20 pairs of trousers a day," she said. "I'd like to borrow more money and expand my sewing capacity."

FAITH IN FINTECH Along with BTPN Syariah, numerous nongovernmental organizations and smaller financial institutions are providing Islamic microfinance and other services in Indonesia. Some are blending Islamic finance and fintech. One player is U.S.-born Matthew Joseph Martin, a 33-year-old who created a crowdfunding website that collects money from various investors and funnels it into Islamic microfinance businesses that can produce stable profits. Blossom Labs, the U.S. company of which he is CEO, runs the site -- blossomfinance.com.

Funds raised through the site are invested in Islamic microfinance providers and other institutions. These parties, in turn, supply funds to borrowers.

Martin converted to Islam in the U.S. in 2010 and established the company in October 2014, aiming to promote Islam's spirit of social justice and mutual aid. He emphasizes providing money, indirectly, to retailers who sell vegetables and meat in rural markets.

Outside of Indonesia's big cities, refrigerators are few and far between, which means residents must go to markets daily to buy perishables. This gives the retailers stable revenue streams.

Martin had gathered less than $20 million in funds for investment as of late August, but he said the annual returns are generally 6-12%. Blossom Labs retains a portion of the profits.

To reduce remittance costs, Blossom Labs uses bitcoin for money transfers. "We are working on ways of using blockchain and bitcoin technologies to make that process even more transparent," Martin said. As for future investment destinations, he said predominantly Muslim Bangladesh is "very interesting for us."

At the same juncture between tradition and technology is Ethis, led by 34-year-old CEO Umar Munshi. The startup runs the site EthisCrowd.com, which raises funds for low-income housing and infrastructure-related businesses in Indonesia. 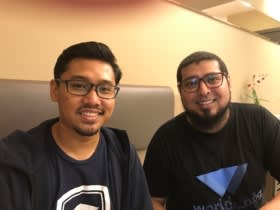 While Ethis is headquartered in Singapore, Munshi's birthplace, he is keen to work in Malaysia. Martin described that country as "too developed for us in terms of [Islamic] microfinance," but Munshi is drawn to its national commitment to promoting Shariah services. Malaysia is "better for [securing] talent for Islamic finance," Munshi said.

EthisCrowd.com counted some 20,000 registered institutional and individual investors as of the end of August. Many of the institutions are from Europe and the Middle East, while the bulk of the individuals are in Singapore. The return on housing investments, for example, comes to 10-15% annually, but Munshi is quick to stress the risks, such as construction delays.

Even with an element of risk, services like Munshi's offer Muslim investors peace of mind by providing detailed information on targets and assurances that the investments will not violate Shariah. Many investors -- not just Muslims -- are eager to make investments that promise high returns and contribute to society.

Tapping into the desire to contribute is Tengku Ahmad Syamil, a 26-year-old friend of Munshi's who co-founded Skolagroup in Malaysia. The company's crowdfunding site, Skolafund.com, solicits donations for low-income university students who need support to continue their studies. The funds are not to be used for studying topics that run contrary to Islam, such as brewing or pig farming. 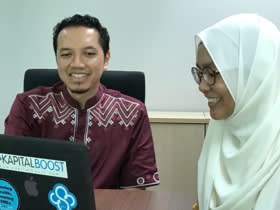 From its launch in 2015 to mid-October, the business raised funds for more than 130 students. Skolagroup retains 5% of the money collected; investors get the satisfaction of having done a good deed, which is important in Islam.

Set up in July 2015, the crowdfunding business had raised 2.2 million Singapore dollars ($1.6 million) as of mid-October. Most registered investors are Singaporeans, but funds have come in from all over: Indonesia, Malaysia, Brunei, the U.K., the United Arab Emirates, Saudi Arabia, Morocco, Australia and Canada. With an eye on expansion, Kapital Boost is weighing options to lower investors' remittance costs.

Blossom Labs, Ethis, Skolagroup and Kapital Boost are all founding members of an industry organization established in April 2016: the Islamic Fintech Alliance. They were joined by four peers in Europe, the U.S. and the Middle East.

Munshi, who serves as chairman of the alliance, said the objective is to help governments, central banks and other authorities understand what Islamic fintech startups need in order to develop and thrive. He said the alliance has opened lines of communication with regulators in at least five countries, including Singapore, Indonesia and Brunei.

Six such institutions, including Maybank Islamic and Bank Islam Malaysia, have invested in a company called IAP Integrated. In February 2016, IAP launched its Investment Account Platform, a website that solicits investment for Shariah-compliant businesses, including small and midsize enterprises.

IAP Integrated CEO Mohamed Izam Mohamed Yusof said one reason for starting the service was simply "to make it available for investors as options." Using Malaysia's independent credit ratings agency, RAM Solutions, the organization publishes ratings for each target business and strives to give investors as much information as possible.

RULES OF THE ROAD Promising services like these are raising hopes in an Islamic finance industry that has suffered from slumping crude oil prices since the latter half of 2014.

The oil downturn slowed the flow of funds from oil-rich Middle Eastern states into Islamic financial instruments, creating a need to harness new demand. Asia is in the spotlight: The region's Islamic finance market was worth an estimated $425.5 billion at the end of 2016, according to the Islamic Financial Services Board -- 22% of the global market. Its growing population and latent economic growth potential mean the prospects for market expansion are bright.

To make the most of the opportunity, authorities need to put the right frameworks in place. "The IFSB has been closely monitoring global developments in the fintech space and playing its due role within its mandate to raise awareness on such initiatives, from the perspective of the Islamic financial services industry," said Zahid ur Rehman Khokher, acting secretary-general of the IFSB, which helps regulators tailor their rules. "A fundamental consideration is how fintech should be approached by regulatory and supervisory authorities to ensure best practices in the industry while upholding financial sector stability, consumer protection and Shariah compliance."

At the same time, Zahid stressed the importance of Islamic microfinance for bringing more people into the financial sector in countries like Indonesia, Pakistan and Bangladesh, with their vast populations of impoverished Muslims. There are some 2 billion adults without bank accounts worldwide, according to a 2015 World Bank report. Asian and African Muslims are presumed to account for a large portion. "There is a possibility that they will become users of Islamic fintech," said Yohei Kitano, a researcher at the Nomura Institute of Capital Markets Research in Singapore. The growing middle classes in Asia's predominantly Muslim countries will also "begin looking for ways to use their surplus funds," Kitano added.

The interests of these investors will need to be promoted and protected. In this sense, the work of regulators, financial institutions and startups has only just begun.