BANGKOK -- Large commercial banks in Thailand have decided to distribute final dividends for 2020 in a cautious manner, after declining interim dividends to brace for a financial crunch from the COVID-19 pandemic.

Bangkok Bank and Kasikornbank, the country's largest and fourth-largest banks by assets, will pay out 2.5 baht (8 cents) a share. Siam Commercial Bank will give out 2.3 baht per share. Krung Thai Bank has declared a dividend of 0.275 baht.

Apart from the top four banks, Tisco Financial Group is set to pay a dividend of 6.3 baht for every share, the highest among listed commercial banks in the kingdom.

Yet returns to shareholders will be significantly limited compared with 2019. Bangkok Bank paid 2 baht per share for interim dividends and 5 baht for final dividends based on 2019 financial results. Its annual dividends for 2020 will be 64% less than the previous year.

Although the Thai economy is believed to be out of its worst phase and economic activity is slowly recovering, it will still take some time for banks to fully restore their dividends because the second wave of the deadly virus is still ongoing. Employees wear protective gear at a bank in Bangkok. The pandemic has taken a toll on the Thai economy, with banks facing falling profits and more bad loans.   © Reuters

The reduced payouts reflect the central bank's guidelines and the lower profits at the country's banks as well.

In June 2020, then-Bank of Thailand Gov. Veerathai Santiprabhob advised Thai commercial banks to hold off on paying interim dividends and buying back their own shares.

"The Bank of Thailand is telling commercial banks to come up with a plan on their capital ratio for the next one to three years, by taking into account economic trends and the potential of debtors to run their businesses in the post-COVID era," he said, asking them to pile up a capital buffer to get through the difficult times.

The central bank eased the order in November after observing the banks' plans and conducting stress tests on the country's financial system. Commercial banks are allowed to pay dividends not exceeding last year's payout ratio and 50% of their net profit for 2020.

"This is in line with guidelines of many overseas regulators and will benefit financial institutions' shareholders, depositors and debtors in the long run," said Deputy Gov. Ronadol Numnonda. 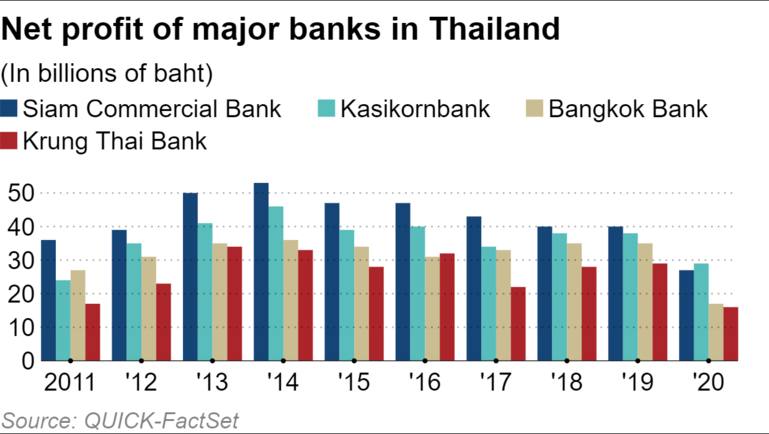 The combined net profit of the country's four major banks in 2020 fell 37% from the previous year to 90.6 billion baht, the lowest in a decade. All of the top four megabanks reported a double-digit decline in net profit.

Provisions for loan losses damaged the banks' profitability. Some researchers fear that the large banks' asset quality will remain under pressure for some time to come.

Commercial banks were asked to set up debt moratorium measures for small and medium-size businesses with credit lines of less than 100 million baht that were having trouble servicing their debts. When the measures expire in June, the banks may have to allocate more provisions.

"In our opinion, temporary relief measures are unlikely to eliminate risks for weaker and more vulnerable debtors, although they may lessen the strain and delay recognition of problem loans," said credit agency S&P Global Ratings.

"We expect banks' asset quality to deteriorate in the next 12 to 24 months and the [bad loan] ratio to increase up to 6%," the rating agency said. The top four banks' nonperforming loan ratios ranged from 3.68% to 3.93% as of December. Higher provisions may further deteriorate the banks' profitability, eventually applying continuous downward pressure toward returns to shareholders.