TAUNGGYI, Myanmar A huge blue squirrel is in trouble, sagging and listing awkwardly from side to side while its red and yellow peers rise smoothly into a clear sky. But the teams that enter the fire balloon competition in Taunggyi -- capital of Myanmar's Shan State -- have been doing this for years, and no one lets a balloon go down without a fight.

The group responsible for the rodent trio dashes off after the rogue squirrel, jamming burning bamboo poles into the opening in the balloon to provide more heat. But somewhere in the fray the balloon catches one of the flames and its fiery carcass whirls into strips, one of which briefly sets an onlooker's scooter on fire. The daytime animal balloon category, according to a team head, is one that children can enjoy. "The evening category has fireworks, and it's a little dangerous," he said.

The Buddhist festival of Tazaungdaing, also known as the "Festival of Lights," is held across Myanmar and culminates on the night of the full moon in Tazaungmon, the eighth month of the country's calendar. In Taunggyi it has become synonymous with a fire balloon festival that draws visitors seeking danger and delight in equal measure. The evening categories see teams send up far larger fire balloons that are festooned with candles or carrying colossal payloads of fireworks, many of which are pointed down towards the crowd. There are accidents every year, and sometimes deaths. Exactly when the festival acquired a fire balloon competition is unclear. Soe Ngwe, a local man from the Da Nu ethnic group who has been passing on traditional music and fire balloon-making skills for years, thinks interest in larger balloons may have grown with the exploits of Kyaw Yin, a self-taught balloonist during the British colonial period who used a trapeze to perform aerial gymnastics.

There are also suggestions that the Taunggyi hot air balloon competition began under the British in the late 19th century, and that the colonialists' hobby was adopted and repurposed for the festival. But festival veterans like Soe Ngwe say the first proper competitions began in the mid- to late 1940s.

Chit Sein, a seasoned judge who is overseeing his 15th contest at the age of 84, was part of his local fire balloon team during the early years of the competition. He said the first competition was in 1946, when two of Taunggyi's more than 20 "quarters" went head-to-head. He remembers the days when balloons gave off only crackling colored sparks. Bright Star team, which took second place in the firework category in 2016, had 2,700 rockets on its full-moon night entry this year.

For spectators on the field, the balloons demand complete attention. Even a short gust of wind can push one laden with dripping candles or a crate of fireworks into the crowd. "Sure, it's safe," said 17-year-old Yan Lin Aung, asked if he should be standing 3 meters from a growing balloon. "But when the wind changes, not safe. Then you run."

ADVERTISING ISSUES Modernity rarely leaves tradition untouched, and it is hard to find a country where the pace of modernization is as fast as it is in Myanmar. Since economic reforms began under the administration of President Thein Sein in 2012, annual economic growth has been among the highest in the world, smartphones and internet access have become widespread, and international brands have moved in.

The judging booth is wallpapered with the blue and white colors of Telenor, a Norwegian telecommunications company. Billboards for Chinese mobile phone brands loom over the field. At night a group of men from the Pa-O ethnic group performs a ritual song and dance before entering the field.

Local artist Ko So, a former balloon team member who still helps occasionally with design, said sponsored balloons have become increasingly common in the last three or four years. On full-moon night, local conglomerate Kanbawza (KBZ) Group sends up a procession of balloons stamped with the logos of its businesses -- a bank, a cement company, an airline.

Individual teams also take sponsors. Bright Star, led by Kyaw Thet, is sponsored by a timber company and took a commission to build one of the KBZ balloons. "Some people don't want sponsors [on the balloons]," Kyaw Thet said, adding that they feel it makes the traditional festival too commercial, and that judges deduct points if sponsors' logos are too prominent. However, Chit Sein said the emergence of sponsors to help remunerate teams, all of whom have day jobs, was a positive development. 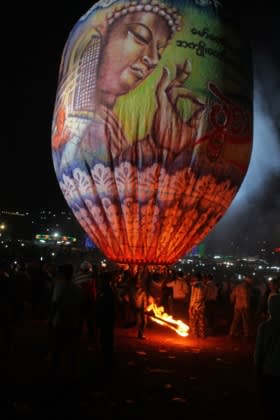 A man runs to extinguish his bamboo pole after helping inflate a balloon. (Photo by Steve Gilmore)

The balloons are expensive to build. Many square meters of mulberry tree paper are stitched together with cloth on the floor of a local monastery and painted with images or symmetrical designs. Thousands of fireworks are hand-rolled using gunpowder from Yangon and arranged in a firing cage that ends up weighing more than an average man. Kyaw Thet said it takes four to six months and costs around 4 million kyat ($2,950) to build a firework balloon.

"If you don't have your own sponsor, you need your own funds," said Zaw Zaw Tun, a team head who has just watched his candle-laden balloon go up in flames. Teams in the candle category race to hang hundreds of lanterns on their balloons as they slowly inflate. If all goes well, the teams attach racks of multicolored lanterns to the undersides to create glowing images or messages in the night sky. But high wind caused a candle to touch Zaw Zaw Tun's balloon as it was inflating. Moments later the team was struggling to stop the flaming structure from being swept across the field toward the fairground.

"The main problem is the wind," said Zaw Zaw Tun, in the resigned tone of a man who has lost many balloons over the years. Teams can spend months, and millions of kyat, getting the proportions right and honing their techniques. But they can still be unlucky with the weather, he said.

Despite the long hand of commerce, the closer that spectators are to the action the less visible the corporate trimmings of the festival become. Teams bring their own musicians and the clang of metal cymbals and beating of wooden drums drowns out everything but the scream of safety marshals' whistles. The field is a pool of darkness lit by firelight from flaming poles and the burning hearts of expanding balloons.

The danger has become part of the experience -- the worst-case scenario is when the balloon fails, and the fireworks explode on the ground -- but the loudest cheers are for the successes, including a colored candle image of an ancient king that just clears nearby power lines to drift into the night.