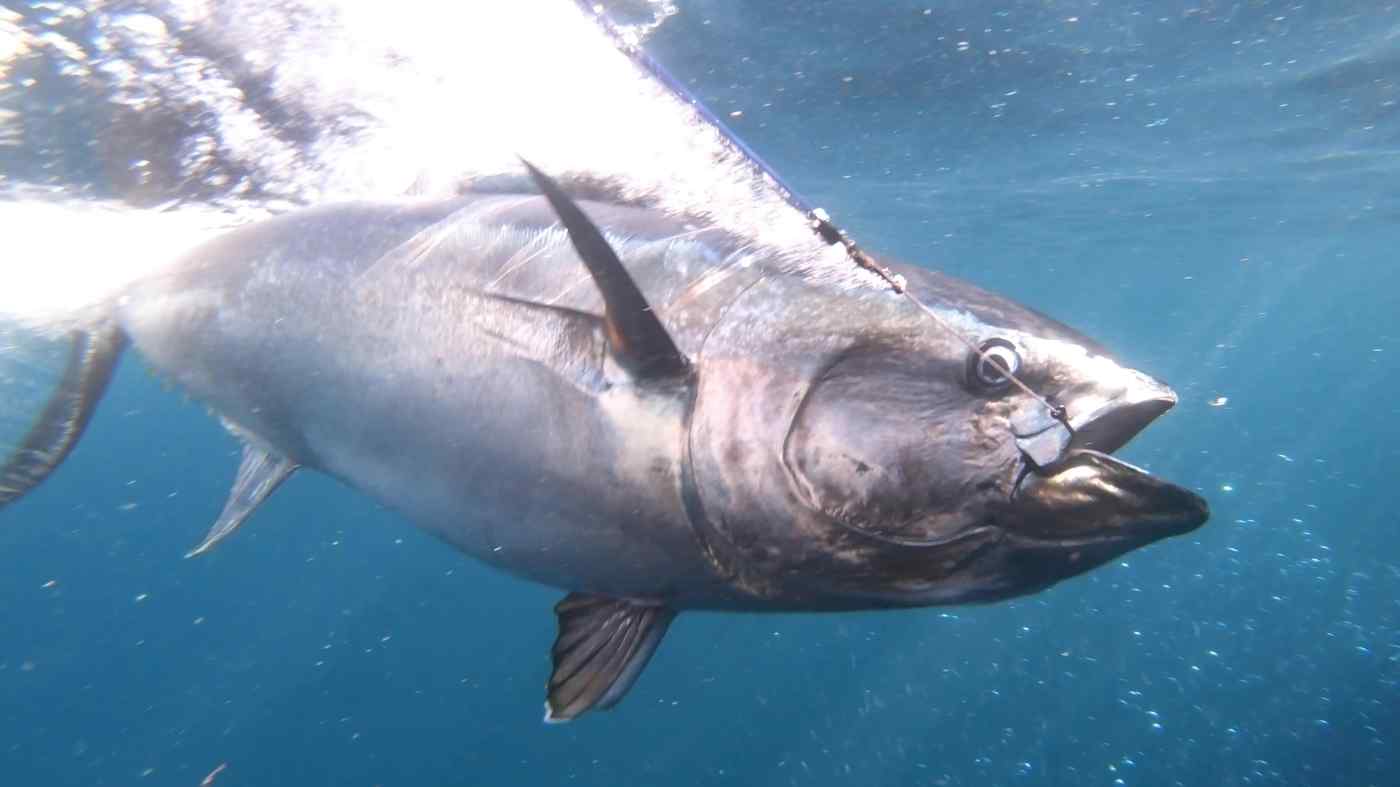 Thai Union gets half its sales from canned tuna, but it is also looking to expand its lineup of more valuable products. (Photo by Kento Awashima)
PETER JANSSEN, Contributing writerMarch 13, 2019 12:30 JST | Thailand
CopyCopied

The company makes about half of its sales from canned tuna, but is now looking to break into the market for refined fish oil and other higher-margin products made from byproducts like fish heads, skin, eyes and bones.

The push comes as Thai Union sales fell 1.2% last year to around $4.2 billion, due in part to the appreciation of the baht against the dollar. The company is aiming for a 5% increase this year, for which more valuable products will be key.

One step in this strategy is a $24 million state-of-the-art tuna oil refinery in Rostock, Germany, opened last November, from which Thai Union soon hopes to be shipping kosher- and halal-certified oil across the continent.

"Our pure tuna oil is just our first step in a suite of nutritional innovations from our marine ingredients business," Thai Union CEO Thiraphong Chansiri said at the launch of the factory last November.

Currently, Thai Union sells much of its unrefined tuna oil to other tuna oil suppliers. Major players in the industry include Numega of Australia, DSM of the Netherlands -- which produces its oil in Canada -- and Nissui of Japan. The company is confident that once its German refinery is fully operational, it can give established suppliers a run for their money. The facility is currently awaiting kosher and halal certification.

"We are talking to companies who like the fact that we control the whole supply chain," said Leon Coolen, Thai Union's managing director of marine ingredients. "It means that we can control the quality and quantity. Our competitors source their oil from different countries." Moving up the value chain is a familiar strategy for Thai Union. Over the past four decades, the company has transformed itself from a supplier of raw tuna into the owner of a stable of international fish product brands. It wholly owns Chicken of the Sea -- once its main U.S. customer -- and has snapped up Europe's MW Brands, John West, Petit Navire, Parmentier and Mareblu in the past decade, as well as a 49% stake in the U.S.-based Red Lobster restaurant chain.

One reason Thai Union chose to build its refinery in Germany as opposed to Thailand, where its main tuna processing plants are based, is the country's proximity to the main customers for tuna oil -- the makers of baby formula.

Much of the world's infant formula is made in Europe, dominated by multinationals including Nestle, Danone, Abbott, Mead Johnson and FrieslandCampina. European producers also account for about 80% of the baby formula market in China, where local producers have yet to recover from a 2008 scandal in which traces of melamine were found in China-made milk powder that was blamed for several infant deaths.

Tuna oil is high in Omega 3/DHA (docosahexaenoic acid), a key ingredient in baby formula. DHA is found naturally in human breast milk and is a major component in the fatty acids in the human brain, especially when the brain is being formed in infancy.

In Europe, makers of infant formula are required to fortify their products with DHA. Under recently drafted legislation, China will soon impose similar requirements on its formula makers, potentially creating a huge demand for tuna oil in the country.

Coolen, who was previously in the dairy business, sees parallels with that industry and seafood.

"Tuna fish is definitely booming as a result of the wider range of byproducts that can be used now," Coolen said "The dairy industry went through a similar transition as is the fish business at Thai Union. If you look at the dairy business, decades ago they made money from milk and cheese, but nowadays those activities are actually loss-making. Now those byproducts, such as whey, which is used in baby formula, are actually the main moneymakers for the companies."

Building in Germany, which boasts advanced industrial technologies, also allowed Thai Union to fully automate its refinery. It takes just three employees to operate the facility, one for each shift.

Equally important, however, was the country's global image.

"We think the made-in-Germany quality image is something that can help us hit the ground running." Coolen said. Although Thai Union is well-known in the canned tuna business, it has yet to establish a reputation in the tuna oil sector.

A positive image is particularly important given the bad press Thailand's fisheries have experienced in recent years. In July 2014, the U.S. State Department's annual Trafficking in Persons report downgraded Thailand to Tier 3 amid reports of widespread human rights and labor rights abuses on Thai fishing vessels. Tier 3 ranking can lead to a ban on imports to the U.S. The following year, the European Union gave Thailand a yellow card for its failure to curb illegal, unreported and unregulated fishing, and for ignoring widespread labor abuses.

"To be honest we weren't prepared for it," said one former Thai Union executive. In response, the company launched its global Sea Change program in 2016 to provide transparency and traceability in its operations, and the following year it established, in collaboration with Greenpeace, a "code of conduct" that applies to all vessels acting as its suppliers.

Darian McBain, global director of sustainable development at Thai Union, said the company has already brought transparency to its fish canning operation. "You can pick up a can of Chicken of the Sea tuna and you enter the code and you can trace it back to the vessel that caught it and see where it was processed, etc.," she said.

This transparency, Coolen says, will be applicable to fish oil, though tracing it will be more complicated. "If we sell one batch of oil, it can come from hundreds of vessels, so you end up with a Christmas tree of captains' statements, but we can do it."

In addition to tuna oil, there are several other value-added products that can be made from tuna byproducts. Tuna skin, for instance, can be made into gelatin, and the bones and fins can be converted into protein products.

Thai Union has established a Global Innovation Incubator Center in Bangkok, where 110 employees are working to develop new products, though it may take a while before their efforts affect the company's bottom line. The tuna oil refinery, for instance, has a 5,000-ton annual capacity and is expected to achieve sales of $15 million this year, a drop in the ocean for a multinational with annual sales of over $4 billion.

"We will be talking about this tuna oil five years from now," said Prasit Sujiravorakul, a senior analyst at Bualuang Securities, a leading securities company in Thailand. "I think they are targeting to achieve 10% of consolidated sales in five to 10 years from now, but the initial target is 1-2% [of sales] in two to three years." Prasit noted that the gross margin on the tuna oil product could be as high as 30%, compared with 10% on the company's canned tuna fish.

Thai Union is not the only Thai food conglomerate that is investing in R&D to help them move up the value chain, after decades of being providers of raw materials and primary products.

"Currently, R&D in the food industry is worth over 15 billion baht, the highest of any manufacturing industry in Thailand," said Kevalin Wangpichaya, of the Kasikorn Research Center, citing 2017 data, the latest available. As with Thai Union's tuna oil, these R&D investments may take a while to bear fruit.

"It will require some time for value-added food products to play a significant role in Thailand's export structure," Kevalin said.