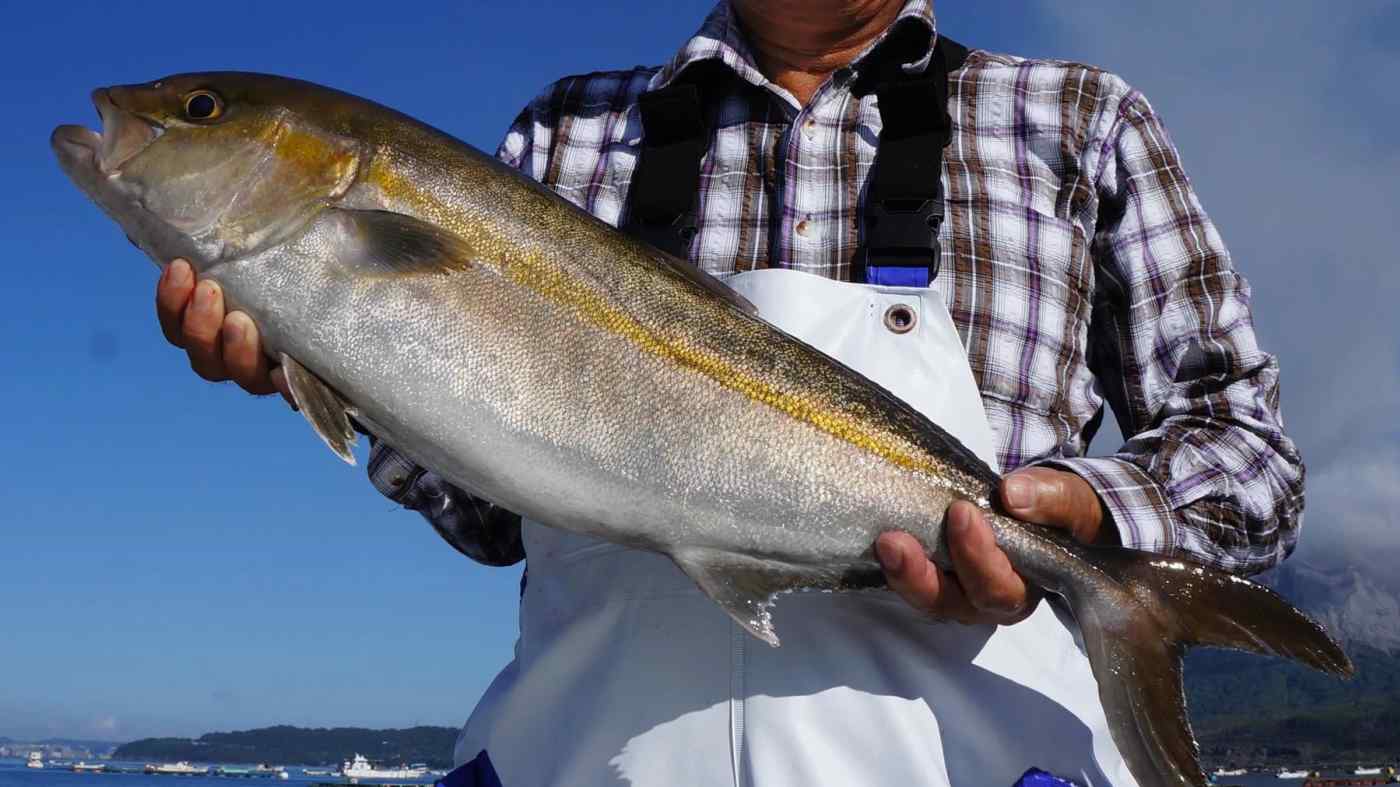 TOKYO -- Japanese researchers have drawn closer to developing a plant-based fish food that will reduce the need for hatcheries to rely on processing other fish for fodder, and help conserve Japan's dwindling marine population.

A team at Tokyo University of Marine Science and Technology, or Tumsat, recently hit upon fish feed derived from soybeans and invertebrates. Fish farms usually use fodder made from smaller fish since they contain the proteins and lipids necessary for growth.

"In order to grow an amberjack one kilogram, it needs fish meal made from at least four kilograms of fish," said Tumsat professor Shuichi Sato.

Much of the fish that people eat only consume fodder derived from other fish, Sato added. That is especially true for amberjack, tuna and other species near the top of the food chain.

In the 1990s, a type of sardine call Japanese pilchard, commonly used to produce hatchery feed, sustained a precipitous drop in the fishing haul. The impending risk to the fodder supply prompted full-scale research into alternatives that use ingredients other than fish. 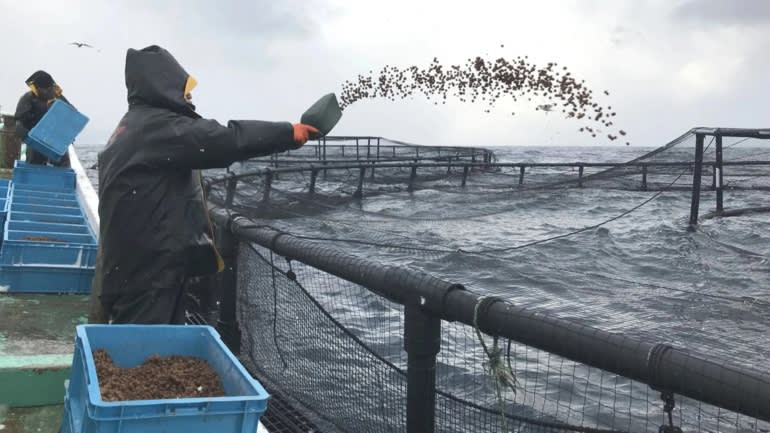 A worker feeds salmon at a fish farm in Aomori Prefecture, in northern Japan. Scientists hope to produce a fodder that is not made from small fish.

It was found that freshwater fish are willing to eat feed that do not contain fish meal, as long as the food is supplemented with amino acid. But many saltwater fish, such as amberjack and red sea bream, hardly ate the new fodder, stunting their growth.

Sato's research team finally developed a usable feed for saltwater fish that eschews fish meal. A look into the fish metabolic pathways shows that a type of enzyme fails to convert the amino acid methionine into taurine, an essential compound. 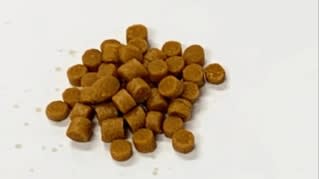 Researchers developed feed that does not contain fish meal. (Photo courtesy of Tokyo University of Marine Science and Technology)

Taurine-enriched feed made from soybean protein compensated for the faulty enzyme, leading to improved development for amberjacks and sea bream.

Another lingering issue is how to provide farm fish with essential fatty acids. Most saltwater fish are unable to produce the omega-3 fatty acid DHA inside their bodies. This is the result of fish losing the FADS1 gene as they evolve.

It is common to think that fish are rich in DHA, but species near the top of the food chain only attain a high concentration of DHA by eating lesser prey.

Sato, together with assistant professor Naoki Kabeya, analyzed metabolic systems in invertebrates, and found that bristle worms and similar organisms potentially contain enzymes connected to producing DHA. They say that gammaridea, a small crustacean, may possibly satisfy the conditions for making DHA as well.

The research team aims to establish the basic technology for commercialization in approximately three years. The scientists will identify the bristle worms and gammaridea that metabolize copious amounts of DHA, and discover an efficient method for raising the organisms.

The University of Tokyo, where joint research is taking place, is conducting analysis at the genetic level. If things go well, the researchers will conduct proving tests over roughly five years to see if farm fish will absorb DHA from feed made from the new feed.

The demand for fish is expected to approximately double by 2050, which could lead to widespread shortages. The past few years have been marked by a downturn in fish population and higher international prices. The need to feed farm fish with smaller fish only adds to the pressure.

Because of the risks associated with feeding fish with fodder not found in nature, Sato says it will take years to receive government approval after the proving tests.