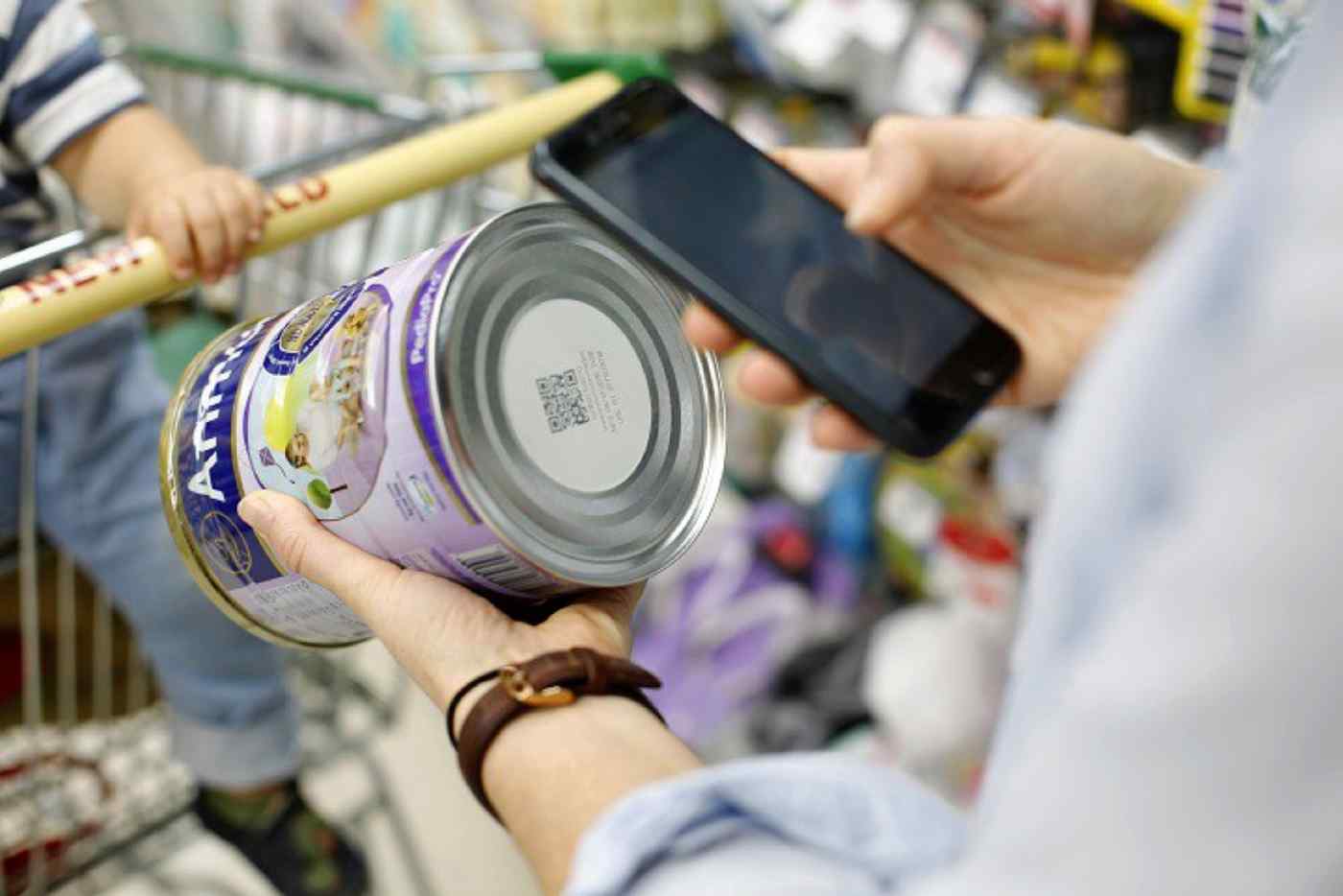 By scanning the QR code printed on the bottom of a baby formula package with a smartphone, a shopper can check if the product is authentic. (Photo courtesy of Fonterra)
KAORI TAKAHASHI, Nikkei staff writerApril 28, 2017 13:35 JST | Australia, New Zealand, Pacific Islands
CopyCopied

SYDNEY -- New Zealand dairy giant Fonterra Co-operative Group is preparing to introduce a global product-tracking system by 2020, allowing it to monitor the entire production process, from collecting milk to processing it to delivering the products to consumers. Through these food safety efforts, the company hopes to prevent counterfeiting, mislabeling and false sales of its products.

The system under development will cover its milk-producing locations -- such as New Zealand, Australia and Chile -- and processing and distribution centers in 25 countries, as well as some 120 countries that import the company's dairy products.

Fonterra in 2014 set up a special team to lead its food safety initiative, called Trust in Source. For the past year and a half, the team has been working on developing the central tracing system, electronically integrating different tracing tools at home and overseas.

Within the country, for example, the process of collecting milk from farmers and processing it at its 34 factories has been recorded on electronic inventory systems, spreadsheets and handwritten logs. The new system under development will allow the company to get a clear picture of the entire production process. The system is scheduled to be ready for use by 2019 and will be put into full operation soon after.

Fonterra provides cheese, infant formula and other dairy products to consumers. The company also supplies some 1,400 kinds of milk-derived ingredients, including casein and whey, for food makers and restaurants.

Tracking the use of each milk-derived ingredient is a complicated process, according to the company. But if concern arises about a specific ingredient, the new system will need only up to three hours to identify all the processed products that contain the ingredient. This will allow the maker to swiftly take action, including alerting its customers and consumers, as well as recalling the affected products.

Meanwhile, Fonterra this month launched another system that allows consumers to check the safety of products they buy. By scanning the QR code printed on the product package, consumers can verify information such as production and expiry dates, as well as the authenticity of the product.

Tracking via QR code is being pilot-tested in New Zealand for its milk powder brand Anmum, which is sold in Asia. But the company plans to expand the service abroad by the end of this year to include yogurt, butter and other dairy products under its Anchor brand.

Behind the dairy producer's efforts are concerns sparked by recent food safety scandals in China.

Last year, local dairy producer Beingmate Baby and Child Food, in which Fonterra owns a stake of nearly 20%, was accused of relabeling its low-grade milk powder and selling it as a more expensive product. Later that year, another Chinese business was charged with repackaging and selling expired Fonterra baby formula. Chinese media reported that Fonterra's local official dealer was linked with the cheating.

In 2013, Fonterra itself recalled its dairy products due to ingredients allegedly containing botulism bacteria, resulting in China suspending imports of baby formula from New Zealand.

The country has advanced in its efforts to track its key products -- beef, lamb and other types of meat. It is now committed to enhancing tracking of its dairy products as well.