TOKYO -- As the number of dairy farmers declines in Japan, so-called gigafarms that churn out more than 10,000 tons of milk a year are stepping up production to meet consumers' growing appetite for dairy products.

A giant dairy farm about 90 minutes from Obihiro on the northern island of Hokkaido is a case in point. It has 1,600 head of adult cows and calves in 14 barns, far above the 85 head kept at a conventional dairy farm.

The Nishikamikano farm employs automation for milking and health monitoring. Milking is done in a long shed where cows wait for staffers to disinfect their teats and attach suction equipment. Once the milking is done, the suction terminals detach, allowing the cows to return to their barns.

Japan had 16 such giant farms in fiscal 2017, industry data shows -- barely a blip against the 15,700 dairy-farming households. But they are crucial in propping up the country's milk production.

Japan's dairy farms, just like the rest of Japan, are facing labor shortages, even with workers recruited from overseas. As the farms' scale increases, automation has become crucial, creating business chances for equipment makers. 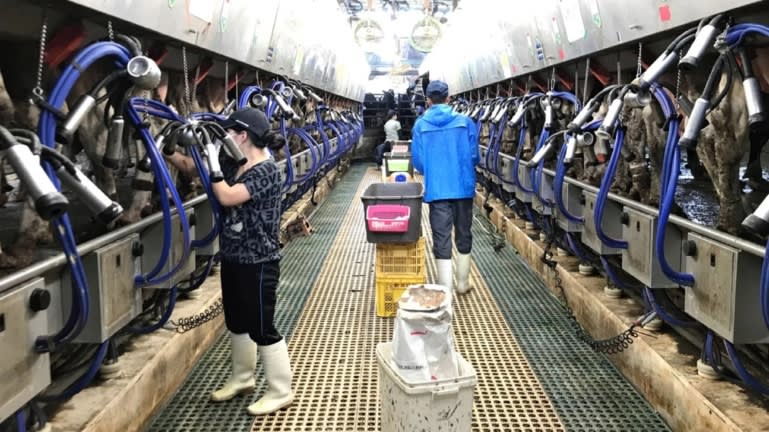 Staffers milk dairy cows at a gigafarm in Hokkaido, Japan.

In July, a Hokkaido dairy farm installed four milking robots made by Netherlands-based Lely as part of a capacity expansion. The new machines, which are electric rather than pneumatic, cut the time needed to latch on to cows' teats by about 30%, to roughly 25 seconds.

Dairy farms "have relied on foreign workers, but hiring competition is fierce," said Hideto Nanbuya, president of equipment distributor Cornes AG, which supplies robots for such tasks as milking and feeding.

The ranks of Japan's dairy farms have decreased roughly 60% over the past two decades, shrinking milk output by around 10% in a decade. But milk consumption rose for a fourth consecutive year in fiscal 2018.

This fiscal year, the volume of milk produced is projected to rise for the first time in four years, according to the Japan Dairy Association, and the government has set a production target of 7.5 million tons in fiscal 2025, up 3% from fiscal 2018.