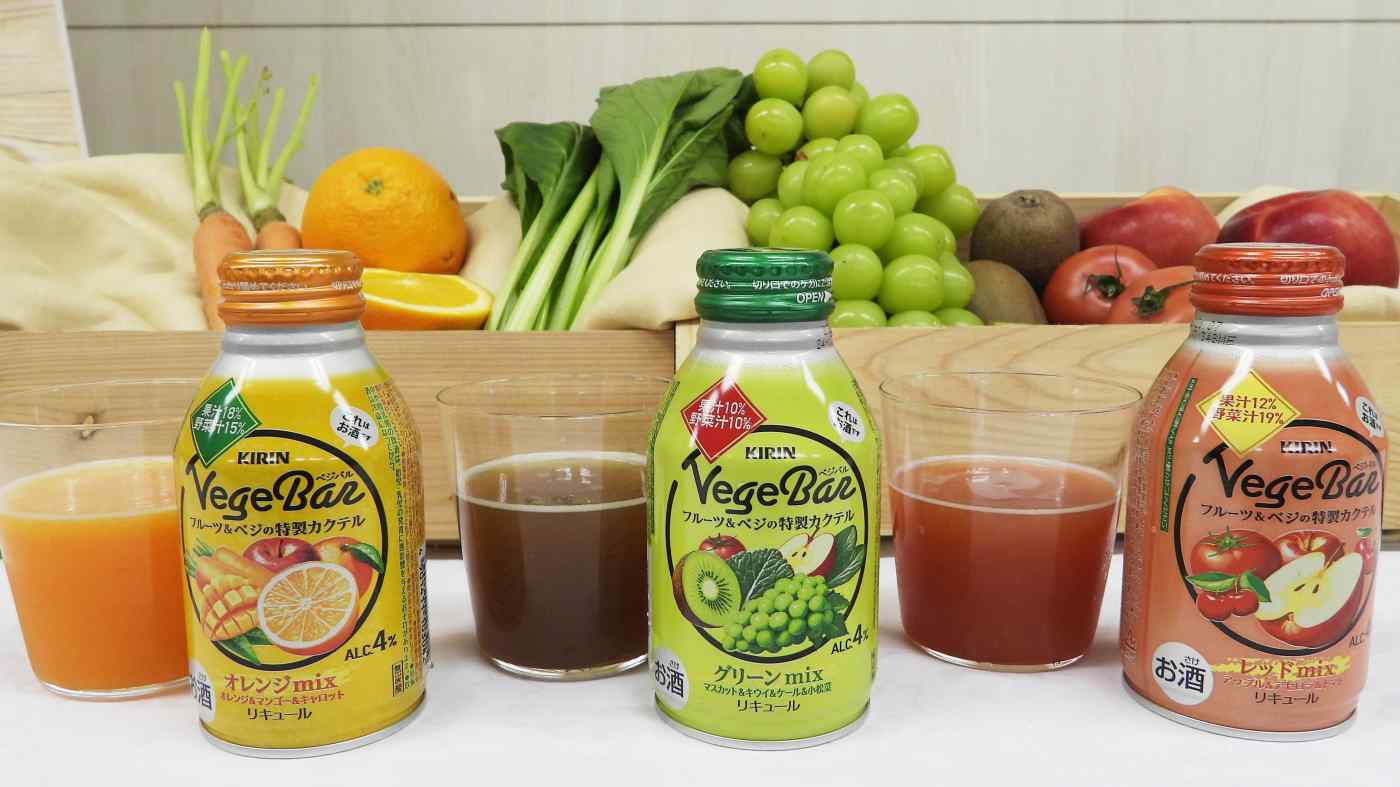 TOKYO/SHANGHAI -- The coronavirus continues to alter consumer behavior, much to the chagrin of restaurateurs and bar owners. In Japan, the outbreak is not only persuading people to eat more at home, it is also convincing them to eat more vegetables.

Kirin Holdings, the maker of Japan's second-best selling beer, has seized on this habit in an effort to turn around sales ravaged by falling demand from bars and restaurants.

In September it rolled out a new alcopop line of vegetable- and fruit-based "smoothie" cocktails. The VegeBar line includes drinks with bases of orange juice, green vegetables and tomato juice.

"Consumers had a negative image toward RTD [ready-to-drink] beverages," said Mitsuharu Yamagata, a senior executive officer at Kirin's brewery unit, "that they are artificially flavored. And consumers are becoming more health-conscious amid the pandemic."

Kirin's move is part of an industrywide trend to make it easier for consumers to drink at home. It comes as consumers themselves are showing an affinity for alcopop -- cans or bottles of soda pop with a shot of alcohol in them.

Euromonitor International expects the industry to can and bottle 1.7 billion liters of RTD alcoholic beverages in 2020, up 5.8% from the previous year.

"The demand for RTD beverages is rising amid the coronavirus pandemic because people cannot go out drinking and are instead enjoying online drinking parties at home," said Kiyokazu Shibukawa, a partner at EY Advisory and Consulting.

Although Suntory was hit by sales suspensions of alcoholic drinks in some countries, these were "only temporary," a representative told the Nikkei Asia. She added that "there is almost no [negative] impact on sales of ready-made drinks as the category is made for household consumption."

Sales of the company's lemon-flavored alcopop are growing especially fast. That's because consumers who are spending more time at home are increasingly seeking out "lemon and other low-sweetness RTDs, which better pair with home-cooked meals," EY's Shibukawa said.

The RTD segment is also giving brewers something to pivot to as restaurant and bar demand for beer suffers.

Kirin, Japan's second-largest brewer, plans to sell about 280,000 cases of VegeBar products by the end of the year.

All the demand is forcing Kirin to increase capacity. With a 7.5 billion yen ($71.2 million) investment, the brewer is adding a line at its Miyagi factory that when complete in 2022 will increase its total production capacity by 30%.

Although Kirin cannot repurpose idle beer-making equipment for RTD production due to different manufacturing procedures, the work will be handled by the same employees.

Asahi Group Holdings, Japan's biggest brewer, has added a new production line for RTD beverages in a Fukushima Prefecture factory. In addition, Asahi in 2021 will invest 3.1 billion yen to increase production of nonalcoholic beer in Fukuoka.

The trend is not confined to the big players.

Sanwa Shurui, a maker of sake and shochu, in early September rolled out its first RTD beverage, Iichiko Shitamachi no Highball, and plans to sell 10 million cans of the shochu, soda and kabosu drink by next July. The Oita Prefecture-based company hopes to attract young drinkers who are not familiar with Shochu. Kabosu is a citrus fruit whose juice is often used to improve the taste of sashimi, cooked fish and hot pot stews.

RTD beverages are taking off in China as well.

Shanghai-listed Shanghai Bairun Investment Holding Group, owner of RTD giant Rio, in the first half of 2020 experienced a 24% year-on-year spurt in operating revenue, to 788 million yuan ($115 million), 89% of which came from canned cocktails.

Rio-branded cocktails, which account for over 80% of the market, maintained growth momentum despite a monthslong lockdown in a part of China.

The group attributes the growth to its response to the crisis. It adopted virus-preventive measures and quickly resumed production once the lockdown was lifted. It also strengthened its distribution channels, offline and online, by unveiling marketing plans for different consumer segments. Rio-branded cocktails, which account for over 80% of the Chinese alcopop market, have been able to sustain their growth momentum despite a monthslong lockdown. (Photo by CK Tan)

A Bairun representative said China's ready-to-drink market remains in its infancy and has "much room" to grow. China's per capita annual consumption of premixed drinks in 2018 was 0.06 liters, less than 1% of what the average Japanese imbibes.

Suntory, Asia's biggest RTD maker, also expects China's market to swell. Suntory's RTD exports in the first half of the year increased by 46% in volume terms from the year-earlier period.

Starting at the end of last year, rival Bairun began to focus on low alcohol-content drinks aimed at young adults. It launched limited edition seasonal drinks in flavors that include lactobacillus white peach, fruit tea and cherry blossom in partnership with Lelecha, which operates a chain of milk tea shops.

An analyst at China's Northeast Securities said Bairun will have the first-mover advantage for the medium to long term as the premixed drinks sector expands. "Bairun," the analyst said, "will use its own brewed whiskey as the base liquor for high-quality products in the long-term."