DALIAN, China -- Snow beer maker China Resources Beer (Holdings) will close as many as one-third of its breweries over five years after a buying spree left its capacity bloated.

China's biggest beer company, which had 74 breweries across the country as of this spring, plans to shut down three to five locations a year through 2024.

"The closures will let us optimize our production, according to CR Beer CEO Hou Xiaohai.

CR Beer is expected to shutter mostly smaller, aging facilities producing low-priced drinks in such provinces as Liaoning and Sichuan, which have a high concentration of plants. A Liaoning brewery that closed in 2018 had been in operation for 60 or 70 years and now sits empty, a source said. 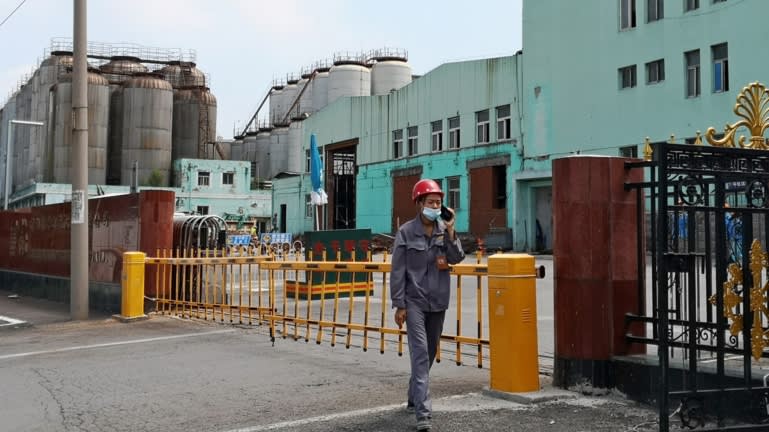 A CR Beer-owned brewery in the northeastern Chinese city of Dalian. (Photo by Shin Watanabe)

The company once had nearly 100 breweries but has slimmed down. Its annual capacity came to 20.5 million kiloliters at the end of 2019, down 7% over four years. But with its annual sales totaling around 11.4 million kiloliters, its facilities appear to operate at only around half of capacity.

CR Beer, a relative newcomer founded in 1992, fueled growth with purchases of small, local breweries before dethroning Tsingtao in the 2000s as the industry leader. China is said to have had more than 800 breweries at one point.

Such rivals as Tsingtao and Anheuser-Busch InBev, the world's largest beer company, also went on a shopping spree, and the big five now command 70% of the Chinese market. With consumers having more disposable income thanks to China's economic rise, the beer market also grew to become the world's largest -- twice as big as the second-ranked U.S.

Then the market started changing in the 2010s. The country was hit by an economic slowdown and demographic shifts, while changing consumer palates meant greater preferences for wine, whiskey and other drinks. The beer market started shrinking in 2014, highlighting the industry's overcapacity.

China's beer production fell 12% on the year in the first half of 2020, according to the National Bureau of Statistics, pushed down by the pandemic-driven consumption slump.

CR Beer's net profit jumped 34% to 1.3 billion yuan ($187 million) in 2019, thanks in part to downsizing its workforce by a quarter. Shedding unneeded facilities is a natural step.

Meanwhile, the maker of Snow beer will invest in growth fields. A 300 million yuan upgrade is planned for Zhejiang Province facilities that brew Heineken beer to boost annual capacity by 50% in 2021. Chinese media report the addition of a new line for canned drinks in Heilongjiang Province in response to growing demand. Production lines in Dalian are being modified for efficiency, a source close to the company said.

While Snow beer is the top-selling brand by volume in the world, it is a brew for the masses. A 500 ml can of the brew sells for 60 to 70 cents. CR Beer is focusing on higher-priced products, just as the competition does.