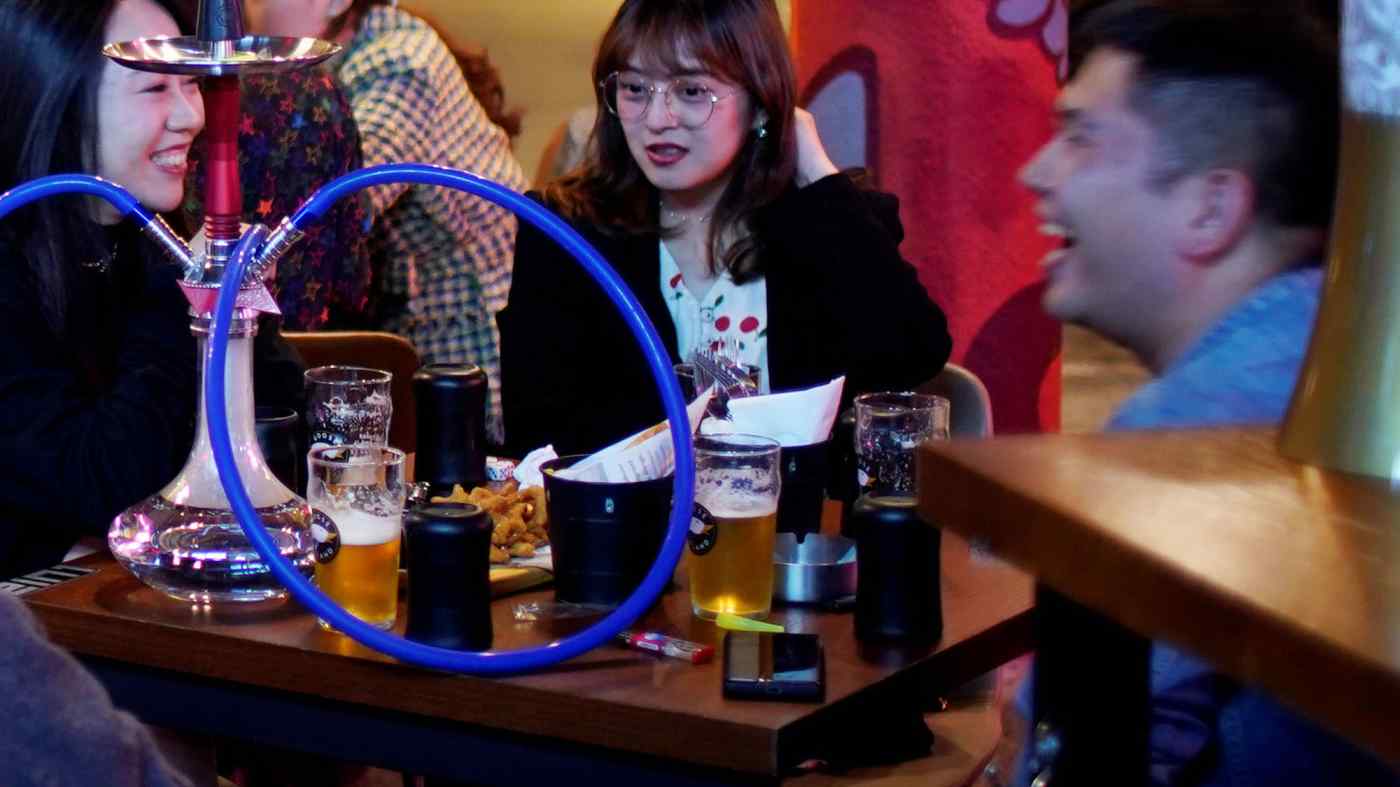 HONG KONG -- As China's economy shows signs of recovery from the coronavirus pandemic, nightlife is making a comeback -- and with it, alcohol consumption.

Brewers and distillers, especially those that manufacture premium brands, are toasting the relaxation of rules on social distancing and meal gatherings. The beer industry in particular was happy to see the gradual normalization of operations for night spots before its important summer sales period from July to September.

The Hong Kong-listed state-owned brewer is not required to disclose quarterly results, but Song said its Heineken brand -- a premium label it acquired the rights to market in greater China in April 2019 -- grew in the "high double digits" over the three month period.

Both Tsingtao Brewery and Beijing Yanjing Brewery, the second- and third-largest brewers in the domestic market, saw their sales increase by 4.8% and 10%, respectively, year-on-year during the July-to-September period, following declines of 5.3% and 13.9% in the first half. For Yanjing, its double-digit rebound came at a time when the company has been in the spotlight: Zhao Xiaodong, its chairman, president and the head of the Communist Party's organization at the company, was detained in early October and his whereabouts is not publicly known.

"We see a continued trend of premiumization, especially in China," said Jan Craps, co-chair and CEO of Budweiser Brewing Co. APAC, during an online conference call late last month. The Hong Kong-listed regional arm of Anheuser-Busch InBev reported 4.8% year-on-year revenue growth in China during the third quarter, a turnaround from a 23.3% decline in the first half. A continuing shift toward demand for Budweiser's premium segment in China helped it to recover.

Sales of the company's premium beers grew at a high single digit, while its super-premium segment jumped by double digits in the third quarter, Craps said. He sees that trend as "the key driver for our top- and bottom-line growth" for years to come, as the share of the premium-beer segment stands at roughly 16% in China, compared with about 40% in developed markets.

What separates China from other major Asian markets for the company -- namely South Korea and India -- is the return of nightlife.

More than 90% of the Budweiser unit's sales at traditional nightlife venues had returned, Craps said, compared with over 80% at around midyear. However, he noted changes in the trend: Demand in traditional karaoke bars has not recovered, but sales at restaurants, bars, pubs and lounges are surging.

"That's where we are allocating a lot of resources in the nightlife channels," he said.

Chongqing Brewery, the Shanghai-listed subsidiary of Carlsberg, saw a sharp third-quarter turnaround in sales, led in particular by its premium segment. While the company's net profit for the period fell nearly 40%, due to an extraordinary loss from a flood at its main factory near the Yangtze River, its revenue rose 13.7% to 1.356 billion yuan ($205.1 million) from a year earlier, in contrast to a 4.4% decline in the first half.

Sales of its top-end segment for the first nine months of the year soared 51.4% year-on-year, while the lowest mass segment dropped 13.2%.

Among 13 analysts surveyed by QUICK FactSet, nine gave Chongqing Brewery "buy" or "overweight" ratings, including Gong Yuanyue at Huatai Securities who said in a recent report "the effect of premiumization effort is apparent."

The stock market has priced in the latest results by the major Chinese listed brewers. Their shares are up by double digits or more since the start of the year, outperforming the larger market indexes in Hong Kong and mainland China.

The exception is Budweiser APAC, which was down 5.2% for the year through Nov. 13, due to pressure from its weak results in India. However, following an announcement on Friday evening that the company would be included in the blue-chip Hang Seng Index gave its shares a boost in early Monday trading, jumping as much as 8.5%.

Indeed, Chinese consumers' growing demand for premium products is what Beijing acknowledges as an engine for the current economic recovery.

"The growth of consumption upgrade items kept a high pace" in the third quarter, Liu Aihua, spokesperson for the National Bureau of Statistics, said last month when China announced economic growth of 4.9% during the period. She specifically mentioned "tobacco and alcohol."

Sales in tobacco and alcohol picked up pace, soaring by 17.6% year-on-year in September to 42.1 billion yuan, reversing from a 1.3% fall during the first eight months of the year, according to government data.

While not as dramatic as beer, distillers of baijiu, a sorghum-based hard liquor, also benefited from relaxed social distancing measures. 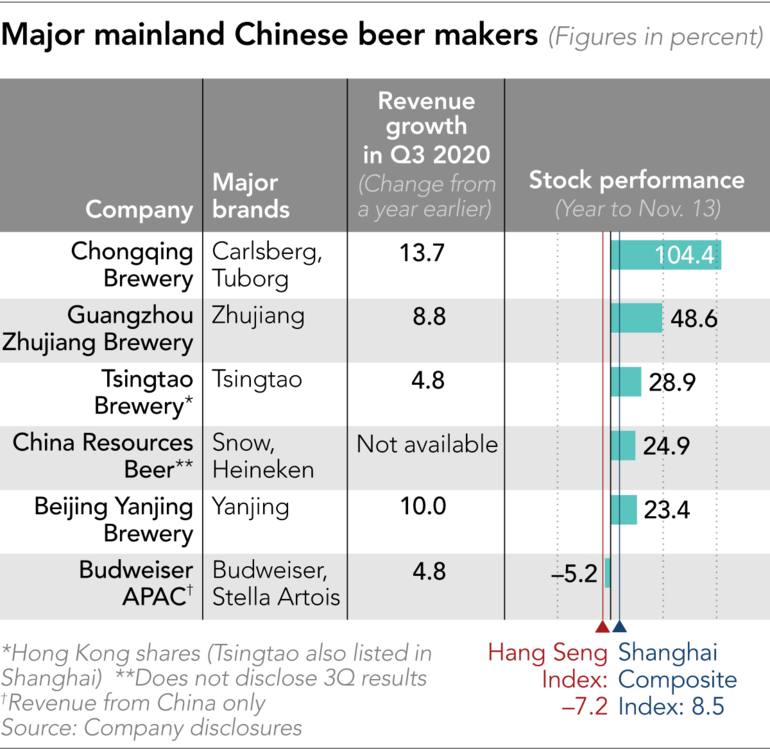 Kweichow Moutai, the baijiu market leader based in the underdeveloped southwestern province of Guizhou, reported 7.2% growth in revenue for the July-September quarter, while top rival Wuliangye Yibin, based in Sichuan, increased its sales by 17.8% during the period.

"We believe the high-end liquor sector rebounded the most as overall consumption recovered in the third quarter," Wang Yongfeng, an analyst at GF Securities, wrote after Wuliangye released its results at the end of October. The Shenzhen-listed distiller on Nov. 5 became the second mainland alcohol producer to top market capitalization of one trillion yuan, following Kweichow Moutai, which now is valued at 2.18 trillion yuan.

Smaller rivals such as Jiangsu Yanghe Brewery, Luzhou Laojiao and Anhui Gujing Distillery all saw their revenues grow between 7% and 15% in the third quarter, reversing from declines in the first half.

The aggregate revenue of large-scale alcohol producers for this year's first nine months stood at 601.02 billion yuan, only 0.3% less than the same period last year, because of the significant recovery over the past few months, according to the Ministry of Industry and Information Technology.

Overall pretax profit for the producers from January to September has recovered to a pre-COVID level of 127.72 billion yuan, up 7.1%.

"The profit level of consumer product manufacturers is stably recovering," according to Zhu Hong, senior statistician at the State Statistics Bureau, with the rise playing a key role in the overall economic recovery. A huangjiu exhibition. Sales of the traditional yellow rice wine are lagging beer and baijiu, and makers of the alcohol are hoping to create a 'huangjiu culture.'   © Xinhua/Kyodo

There is, however, one libation that has not been so popular at the party: huangjiu, a traditional yellow rice wine. The top huangjiu distiller Zhejiang Guyuelongshan Shaoxing Wine suffered a revenue decline of 9% in the third quarter. While that was an improvement from a 39.3% drop in the first half, it is still lagging behind beer and baijiu.

"The overall demand of huangjiu has been contracting in recent years," according to Zhou Yuelang and Lu Ruochen, analysts at China International Capital Corp. Even during the current recovery phase, "the rebound is slower than other liquor categories, and we anticipate the recovery in the fourth quarter to remain slow," they said in a recent report.

In the city of Shaoxing in eastern Zhejiang province, where huangjiu originated, industry leaders gathered earlier this month for a weeklong exhibition of the liquor.

"[We are questioning] how we could create more scenarios where young people would recognize and acquire a taste for huangjiu," Liu Zhenguo, deputy secretary-general of China Alcoholic Drinks Association, told local media.

"The core issue is not about [creating sales] channels, but finding the needs of consumers," he said. "How can huangjiu culture win consumers' recognition?"