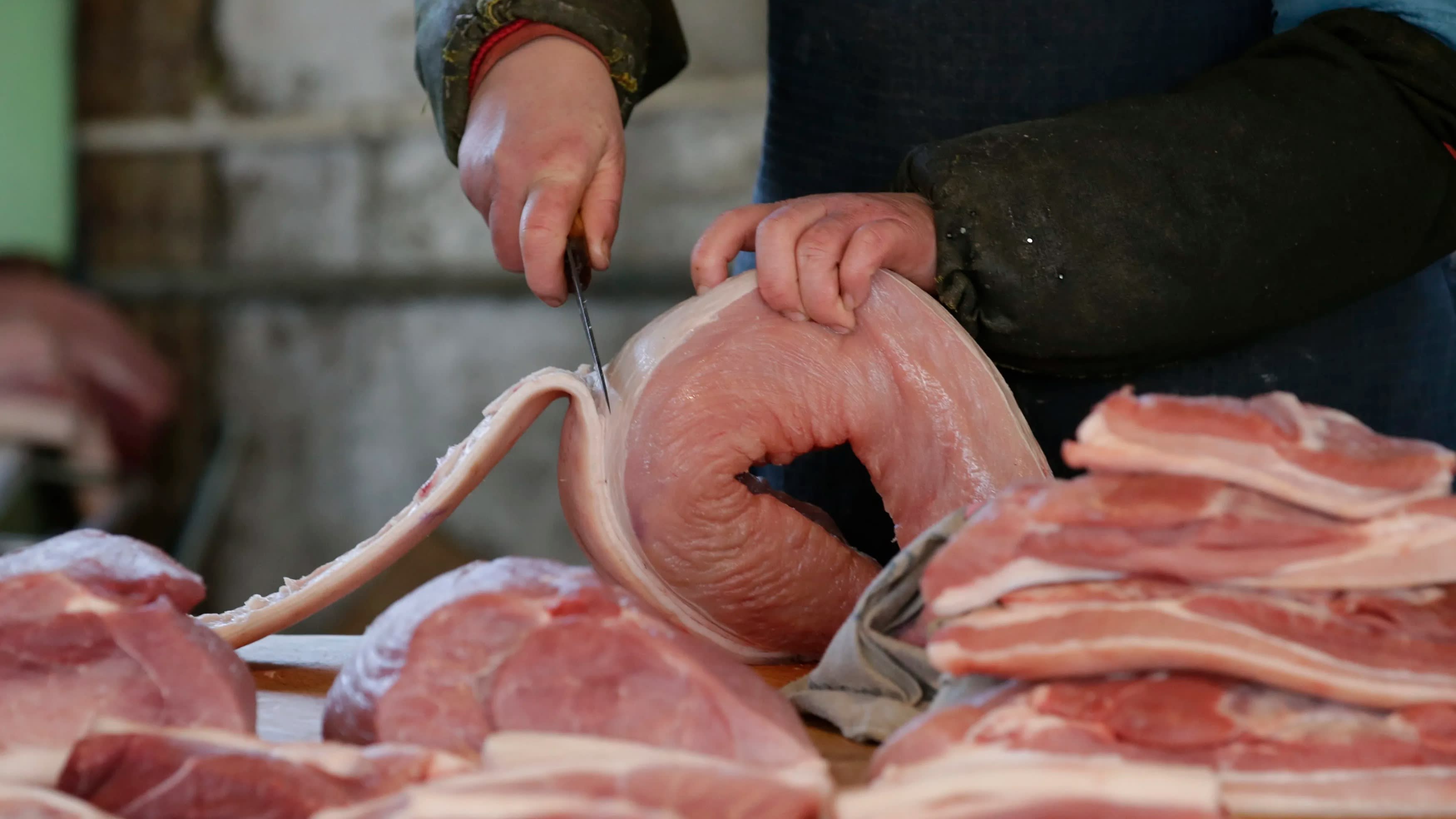 BERLIN -- German and Danish sausage producers are expanding into China as a massive outbreak of African Swine Fever devastates the world's largest pork industry, opening the way for European companies to highlight their reputation for safe, high-quality meat.

German carmakers like BMW and Audi have long used their brand image of premium quality to cultivate demand in China from high-end consumers for their luxury vehicles.

Major Chinese companies like Midea Group have in recent years also looked to Germany for advanced technologies like those of robotics producer Kuka.

Now it is the turn of meat producers to bring their expertise to China.

Danish Crown, Europe's largest pork producer, opened its first Chinese factory in September, a meat packaging plant near Shanghai. Its output, to be made from pork imported from Denmark, will be supplied exclusively to a unit of e-commerce company Alibaba Group Holding for the next five years.

German rival Tonnies Group meanwhile has also announced plans to invest in a half billion euro ($549.2 million) slaughterhouse joint venture, its first project outside Europe, in Sichuan Province with an affiliate of New Hope Group, one of China's biggest agribusinesses. The venture is now in limbo, however, due to a dispute within Tonnies' founding family about the direction of the company, including its expansion into China.

The epidemic of African Swine Fever, which is harmless to humans but fatal to pigs, has seen nearly half of China's herd die or be killed to prevent the further spread of the virus over the past year, according to estimates by Dutch bank Rabobank. The virus has reached every province of the country.

China, which accounts for a majority of global pork consumption, was previously home to roughly half of the world's pigs. The squeeze on domestic supply sent pork prices soaring 46.7% and imports up 76% in August from a year earlier, with Europe accounting for much of the new supply. Authorities also began releasing pork from official strategic reserves of the meat.

Amid the crisis, authorities are keen to tap advanced foreign know-how and technology to raise standards in the domestic meat industry.

Unlike Danish Crown's venture, Tonnies' would use local Chinese pigs. With construction scheduled to begin next year, its 50/50 joint venture abattoir with New Hope affiliate Dekon Group would have an initial capacity to slaughter 2 million pigs a year, to rise eventually to 6 million. Tonnies Group announced its venture with the Dekon Group at the Western China International Fair in Chengdu in late September. (Courtesy Tonnies Group)

"We are bringing our knowledge of food production based on German standards to the world and strengthening the quality and safety of supply in China," said Managing Partner Clemens Tonnies, brother of the company's late founder, Bernd Tonnies, in the company's September announcement of the venture. "The demand for pork in China and many other Asian countries is great and will continue to grow in the coming decades."

The Meishan region, where the abattoir would be built, is known for docile pigs valued for their ability to produce large litters.

Robert Tonnies, son of founder Bernd, is objecting the joint-venture plan, however. He has feuded with uncle Clemens over ownership, strategic decisions, animal welfare and capital spending since his father's death in 1994.

The two clashed over the summer when Robert won a temporary court injunction that briefly held up plans by Clemens for Tonnies to buy two meat plants from Switzerland's Bell Food Group, with Robert alleging he had been misled about the deal.

With agreement from Clemens and Robert, who each now own half the company, a board of directors was created in 2017 with four independent directors and finance chief Daniel Nottbrock joining the two male Tonnies on the board.

Robert claimed in recent comments to the German publication Manager Magazin that Clemens pushed through the Chinese joint venture without consulting the board, remarking he "could be ill with megalomania." Robert has called for a board review of the plan this month, raising the possibility the venture could be halted.

None of the independent directors could be reached for comment and a company spokesman declined to comment on Robert's comments. Clemens meantime is serving a three-month suspension as chairman of the supervisory board of German soccer club Schalke after remarking at a political event that with more power plants, Africans "would stop making babies when it gets dark."

Tonnies has 16,000 employees worldwide, with plants abroad in Denmark, Poland, the U.K. and France. In 2018, the group generated 6.65 billion euros in revenue.

Mandes Verhaagh, an agricultural economist at Germany's Federal Research Institute for Rural Areas, Forestry and Fisheries, said European meat companies would be well-advised to pursue ventures like that planned by Tonnies.

"Foreign players that manage to position themselves now in the local value chain will fare better than others who stuck with the old model of simply exporting pork to China," he said.