TOKYO -- In a small mountainside city not far from the bustle of Tokyo, farmer Takayuki Kato is on a mission to turn ostrich meat from a novelty to a staple in Japanese households.

Queen's Ostrich Tsukuba, located 75 km northeast of the capital, houses about two dozen ostrich. The birds appeared unfazed by the sweltering heat on a recent summer day, and seemed curious about the interlopers in their pen.

"They're the equivalent of preteens in humans. They won't get aggressive," Kato said, referring to the large fowl that can reach heights of 2 meters and weigh 100kg, and have been known to chase -- and attack -- people.

"Ostriches have red meat that's not too fatty and easy to eat," said Kato. "You could have ostrich every day and not get sick of it."

Kato's interest in ostrich dates back to the 2011 earthquake and tsunami that devastated northeastern Japan. He had volunteered to help with reconstruction efforts, and when he saw the extent of the damage in person, "I understood just how powerful nature is," he said. 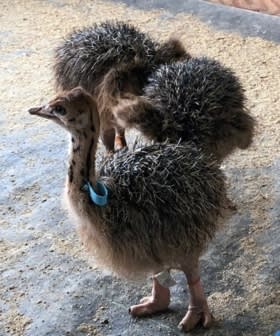 These ostrich chicks, which are less than a week old, will eventually grow to 2 meters tall. (Photo by Tadanori Yoshida)

For Kato, the experience was a lesson in the importance of sustainability. He homed in on ostriches as a more environmentally friendly alternative to beef, since they require significantly less food and water than cattle.

He first became involved with events promoting ostrich meat from Saitama Prefecture, using his professional background in advertising. This only solidified his faith in the industry, and he quit his job in 2012 to launch ostrich meat wholesaler Noblesse Oblige.

Because ostrich has a low fat content, it can often be cooked too tough and is best served in dishes like carpaccio. Kato found fellow fans of the meat among restaurant chefs from posh French eateries to izakaya bars, whose expertise was crucial to showcasing ostrich in its best light. Kato's client list grew to about 300 restaurants, largely through word of mouth.

Kato began raising the birds himself in 2017 to better compete with higher-quality, more-efficiently produced meat from overseas. Noblesse Oblige at the time sourced its meat from about five ostrich farms in Japan. But even the largest of them raised several hundred birds, compared with over 10,000 at a Vietnamese facility he visited. Kato had been planning to expand his flock by about 100 birds every year. Cooking ostrich can be a delicate task, due to the meat's low fat content. (Photo courtesy of Queen's Ostrich Tsukuba)

Then the coronavirus hit. Like many other Japanese farmers, Kato suffered a massive blow to sales as restaurants shut down under a nationwide state of emergency.

With shipments to restaurants near zero in April and May, Kato decided to switch gears to retail sales -- a field in which he had almost no experience. He listed meat from his farm on Tabe Choku, a farm-to-table delivery app operated by Tokyo startup vivid garden. Thanks to a campaign by the company to help pandemic-hit producers like Kato, he ended up more than making up for the drop in restaurant sales.

Retail sales have since slowed down. But Kato believes the pandemic provided a valuable opportunities to connect with consumers he may not have otherwise.

"Ostrich may never become as popular as beef or pork," he said. "But I think it could become as big as mutton."