JAKARTA -- Indomie, the half-century-old instant noodle brand that has been dubbed Indonesia's national food, has enjoyed an added boost from not only consumers cooped up at home amid the coronavirus pandemic, but also the recent death of a company legend.

Nunuk Nuraini, who was involved in flavor development for Indomie for three decades and created the much-loved mi goreng flavor, died in late January at 59. The news brought an outpouring of tributes and was even covered abroad by outlets including CNN and the BBC. The latter described her flavor -- based on a regional fried-noodle dish -- as a "cult favorite."

Indonesians on social media took the opportunity to express their affection for the brand. Some fans said they were eating Indomie noodles in her honor.

"Indonesia has lost a culinary legend," tweeted Economy Minister Airlangga Hartarto, who hailed her as a "hero."

Indomie is the biggest brand in a country where instant noodles are a staple. About 60% of Indonesians eat one to six packs of instant noodles per week, according to data from the health ministry. 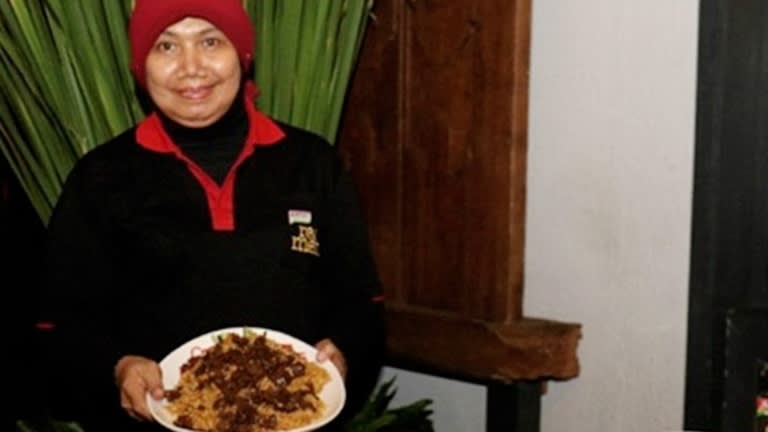 Indomie has spread around the world since its 1971 launch, including in the U.S., Europe, the Middle East and Africa, and has become synonymous with instant noodles in some regions. The mi goreng flavor has been a favorite since it came out in 1982.

The noodles offer convenience at the hard-to-beat price of just 20 cents or so per pack. The lineup includes both ramen-style soups and others, like mi goreng, made without broth. Diners can tweak the noodles to their liking with add-ins and flavorings, and even famous chefs can be found on YouTube putting their own spin on Indomie with dishes like carbonara.

Aeon Indonesia, an arm of Japanese retailer Aeon, says sales of Indomie noodles held steady in February compared with a year earlier, even after a price hike in early 2021. Demand is expected to remain strong this year as the country's economy recovers.

Supermarkets within Aeon malls in Indonesia sell 4,000 packs of Indomie noodles a day on average, boosted by a trend toward bulk buying amid the pandemic.

Indofood CBP Sukses Makmur, the company behind the Indomie brand, has seen revenue rise steadily since it went public in 2010. Sales grew 3% on the year to 33.9 trillion rupiah ($2.34 billion) for the first nine months of 2020 and are expected to reach a new high when full-year earnings are announced soon.

Indofood CBP is owned by Indofood Sukses Makmur, a core unit of Salim Group, one of Indonesia's largest conglomerates.

"In the midst of challenging market environment due to the COVID-19 pandemic, ICBP was able to deliver consistent growth performance in the first nine months of 2020 demonstrating its resilience and agility," said Anthoni Salim, CEO of Indofood and Salim Group, in a news release.