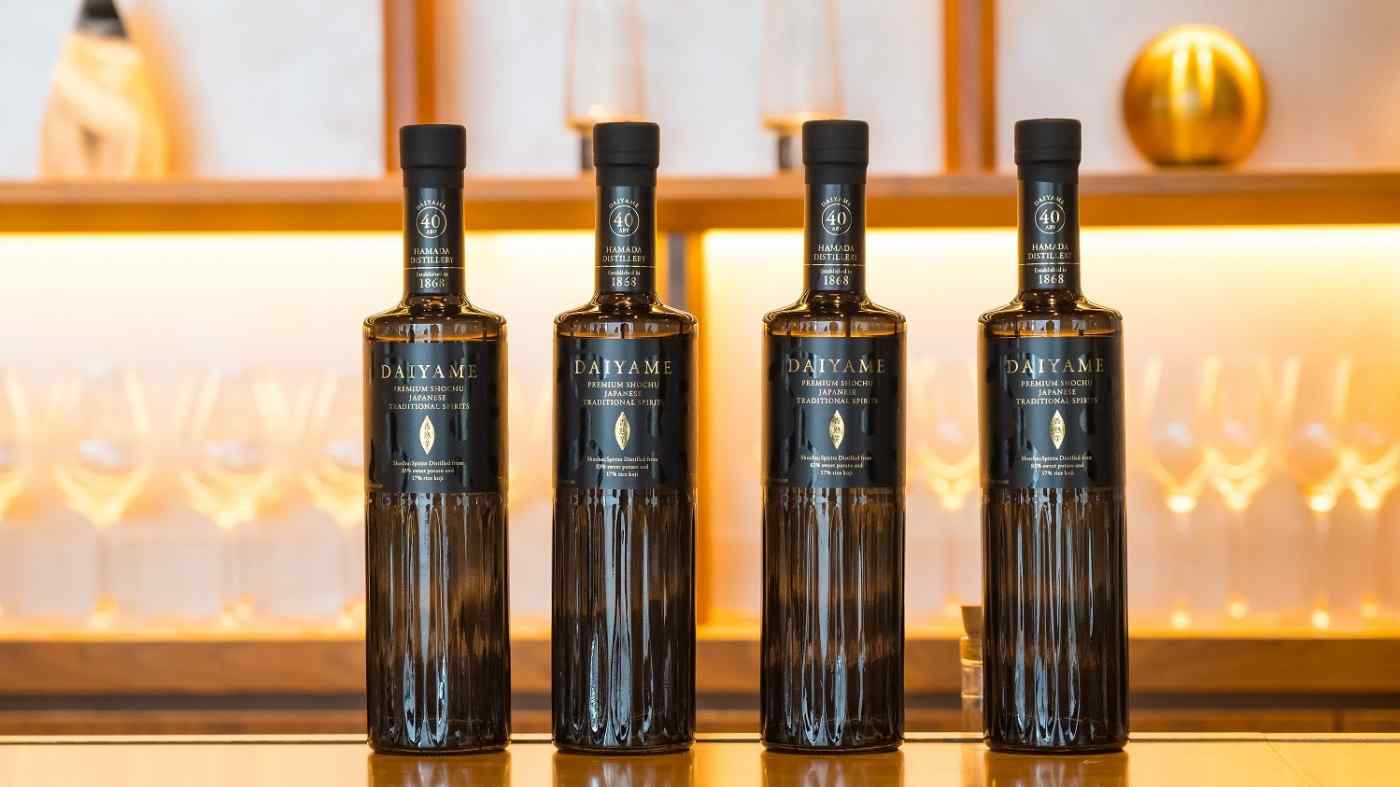 Japanese shochu makers are trying to carve out a market overseas as they face a shrinking pool of drinkers at home. (Photo courtesy of Hamadasyuzou)
NANA SHIBATA, Nikkei staff writerJune 26, 2021 17:19 JST | Japan
CopyCopied

TOKYO -- Japan's shochu makers are working to gain a foothold in overseas markets as they grapple with a shrinking population at home.

Shochu, a traditional distilled liquor, is typically made from grain or potatoes. Distillers have been hit hard by the coronavirus pandemic, but their main long-term challenge -- a declining domestic market -- predates the spread of COVID-19.

Hamadasyuzou, a distiller based in the southwestern city of Kagoshima, will roll out a shochu brand in July that will sell exclusively overseas. Daiyame 40 has ingredients such as sweet potatoes and black koji malted rice, giving the spirit an aroma of lychee and rose. Hamadasyuzou describes the new shochu as sharp, light and sweet.

In July Hamadasyuzou will begin exporting Daiyame 40 to the U.S., the U.K., France, Germany, China, Taiwan, Hong Kong and Singapore. It hopes the rollout of the product will help it reach sales of 100 million yen ($905,000) by June 2023.

In Japan, shochu is usually served with hot or cold water, on the rocks or with soda. But Hamadasyuzou is marketing Daiyame 40 as a cocktail base.

"As time spent at home has increased due to the coronavirus pandemic, more people are enjoying making cocktails at home, and purchasing sprits such as gin and vodka as cocktail bases," Shuro Kawano, of Hamadasyuzou's marketing department, told Nikkei Asia. The Kagoshima-based distiller hopes cocktail drinkers will develop a taste for Shochu as well.

Kawano said the company will consider selling Daiyame 40 in Japan once the shochu-for-cocktails trend that it hopes to foster catches on overseas.

Japan's distillers have little choice but look abroad for growth. According to the National Tax Agency, Japan's shochu consumption dropped 21% in 2019 compared with a decade earlier as people consumed less alcohol and people switched to other drinks. Globally, however, the sprits market is buoyant: It is expected to be worth $481 billion in 2021 and is forecast to grow 6.89% per year between 2021 and 2025, according to Statista.

"Due to the decrease in the drinking population and consumption in Japan, we are seeking sales channels overseas. The global spirits market is growing significantly, and we want to expand our sales channels for Japanese spirits," Kawano stressed.

However, compared with Japanese whisky, which has won a large following overseas, Shochu is less well known. Most of shochu producers are fairly small and lack the marketing muscle and experience of Japan's whisky distillers. Japan exported 27.1 billion yen of whisky last year, compared with shochu exports of 1.2 billion yen, according to the Ministry of Finance.

Prime minister Yoshihide Suga is backing the efforts of the Japanese spirits industry to expand abroad. His government aims to more than triple exports of shochu and awamori, a distilled spirit from Okinawa, to 4 billion yen by 2025, versus their level in 2020.

"Government support and growing international praise for Japanese sprits such as whisky and gin help generate interest over shochu among bartenders overseas," Makoto Togou, head of Sanwa Shurui's international business, told Nikkei. He acknowledged that shochu was not well known overseas for a long time due to a lack of marketing.

Sanwa Shurui based in Japan's western Oita Prefecture, shares the concern of many distillers over the health of the domestic market. In a strategy similar to that of Hamadasyuzou, Sanwa Shurui has developed a shochu brand exclusively for the U.S. market. The potent shochu, called iichiko Saiten, is 43% alcohol by volume and meant to be used as a cocktail base.

When Sanwa rolled out the product in 2019, it initially targeted bars. Then the pandemic struck and it started offering home deliveries. It also put cocktail recipes online to spur demand during the lockdown. In the future, the distiller hopes to introduce the product in London, Hong Kong and Singapore, which are well known for their bar culture.