TOKYO -- Japanese izakaya, the usually boisterous pubs offering a variety of food and drink and often catering to large groups of people, have had to tone down their services due to the novel coronavirus. And while it remains unclear when they can get back to normal, many are coming up with creative ways to keep customers safe and reassured while supporting their businesses going.

On July 28, Shuta Kuraishi, the 37-year-old owner of Niku no Himaraya by Porcoro Tsukiji, about a two-minute walk from the Tsukiji subway station, made a toast with beer in front of his computer. He was enjoying a video chat with five other people, all holding glasses, as they discussed how to cook meat and other topics.

"I met some of the participants for the first time, but sharing the same meal made it easier to find a common topic," said Tomonoshin Mayuzumi, a 24-year-old college student from Ibaraki Prefecture. "I want to visit the restaurant in Tokyo once the pandemic is over," he added.

Besides Mayuzumi, the other four joining the call with Kuraishi dialed in from Kanagawa and Okinawa prefectures.

They used the Ikitsuke virtual bar service jointly operated by app developer iTAN and Sibire, a startup in the regional revitalization business. Ikitsuke is a system in which "a virtual bar owner" can solicit participants from all over the country and conducts a video chat with them. Appetizers from the menu of an izakaya of choice will be home-delivered in advance so that the participants can share the same treats. Participants in an online drinking party hosted by Niku no Himaraya by Porcoro Tsukiji in Tokyo make a toast into their computer screens.

The service also allows customers to pick appetizers from izakaya registered on the site and have them delivered to participants' homes.

Shunsuke Kurata, a 30-year-old representative for iTAN, came up with the app in late March. His favorite izakaya were suffering from declining customer traffic due to the spread of the coronavirus. He launched it to help them out.

"Online izakaya services have some advantages," Kurata said. "For example, you can get acquainted with people who live far away from where you are."

Some izakaya are working to reassure people that it is safe to enjoy their offerings on site. One located east of JR Shinjuku Station, for example, is surprising visitors with thorough antivirus measures.

"Welcome. Please take your temperature," says an employee at Kichiri Shinjuku, greeting customers via a video call on a 27-inch monitor screen. They take their own temperatures and pick up a map at the entrance to find their tables.

After a state of emergency was declared in Tokyo and six prefectures on April 7, Kichiri Shinjuku shifted to takeout and delivery services only. It reopened a month later, but its way of doing business had changed dramatically.

To reduce human contact to prevent the so-called three Cs -- closed spaces with poor ventilation, crowded areas and close-contact settings, the restaurant cut its number of seats by almost half and set up transparent partitions between seats. Customers scan QR codes on the menu to place orders on their smartphones so that they will only come into contact with staff when meals are served and bills paid. 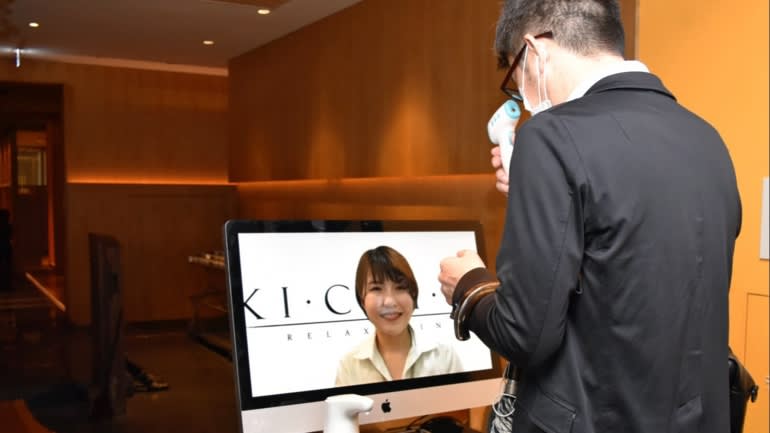 A Kichiri Shinjuku customer in Tokyo takes his own temperature in front of the monitor at the entrance.

Even in late March, the Shinjuku area was a veritable ghost town as people increasingly avoided going out. Kichiri Shinjuku saw its customer traffic drop to less than half that of normal. So its employees came up with ideas to ensure customer safety that would entice them to come back.

Izakaya chain En in Sapporo on the northern island of Hokkaido began a drive-through service offering yakitori, or chicken and other items skewered on a stick. En, a unit of Shinwa Holdings, in May started selling nine types of dishes for 500 yen ($4.74), including assorted yakitori and a namatsukune bento with grilled chicken meatballs.

In Hokkaido, the prefectural government declared its own state of emergency in late February, urging residents to avoid going out for nonessential and nonemergency reasons. While many Shinwa establishments shut down, some continued drive-through and takeout services.

At En Nishimachi Honten, about 6 km away from Sapporo Station, average daily sales were just over 100,000 yen before the outbreak, but after the eatery started a drive-through service, daily sales have occasionally topped 200,000 yen.

While izakaya remain under pressure as local governments seek shorter opening hours and urge people not to dine out in large groups, some owners are testing new ideas to survive in the post-coronavirus era.