TOKYO -- Ippudo has redefined the experience of eating tonkotsu ramen. When the restaurant chain was founded in 1985, it perfected a recipe for rich and flavorful tonkotsu broth -- a sublime milky-white pork-bone soup.

The wood-themed interiors of the chain's shops create a warm, relaxing atmosphere. Jazz playing in the background adds an air of sophistication. The ramen is served in stylish Arita porcelain bowls. The idea is to dispel tonkotsu ramen's image as a smelly, unrefined dish. The strategy has paid off handsomely, attracting many women to its shops.

Now Ippudo is plotting another ramen revolution. It has developed a tonkotsu dish that contains no pork or other animal products.

The challenging project began when Hidenobu Tomita, a sales manager at Chikaranomoto, the Fukuoka-based company that operates the chain, heard a shop manager lament that some customers could not find a ramen dish they could eat due to religious or other dietary restrictions.

In recent years, ramen has caught on in many countries beyond Japan. The country was experiencing a tourism boom before the COVID pandemic struck, but many would-be Ippudo customers were unable to enjoy their offerings because the chain specializes in tonkotsu. 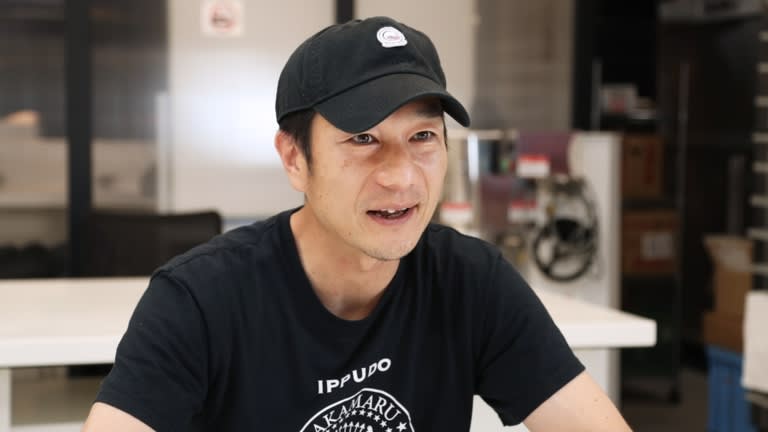 To reach people who do not eat pork, the chain began working on a vegetarian recipe. The project team was encouraged by market research in Japan that showed surging demand for vegan food. In addition, some of the chain's overseas restaurants were already serving ramen dishes in vegetable broth. The team considered using seafood but dropped the idea in favor of plant-based fare.

Unsurprisingly, creating a plant-based soup that tastes like Ippudo's renowned tonkotsu broth was the hardest part. Tomita sought the help of Fuji Oil, a Japanese food processor. Through trial and error, they concocted a soy milk-based soup flavored with mushrooms and kombu seaweed for richness and savor. Ippudo says the plant-based soup is probably the closest approximation to actual tonkotsu.

The next challenge was coming up with a replacement for chashu -- braised pork belly slices that usually top tonkotsu ramen. This is made from scratch from a paste of kidney beans. The vegan noodles are made without eggs. After three years of struggle, Ippudo's vegetarian ramen was finally ready to serve.

In February, 45 Ippudo restaurants in Japan started offering a limited number of plant-based ramen dishes. They were an instant hit.

"While my husband frequents Ippudo, my kids and I are vegans and have never come before. This is the first time our entire family has eaten at Ippudo," said one satisfied customer. 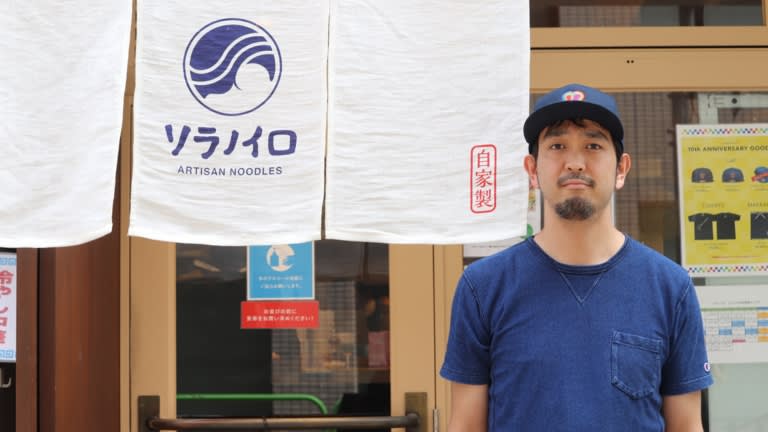 The plant-based ramen appeals to health- and environmentally-conscious customers, according to the chain. "We were very pleased to hear from happy customers, since our mission is to give them the best experience of eating ramen," said Tomita. The chain is considering turning one restaurant in central Tokyo into a dedicated shop for plant-based noodles. It is also working on new varieties of vegan ramen.

Ippudo even plans to help other ramen restaurants offer their own vegan fare. "Plant-based ramen has a significant role to play" in improving the industry's overall sustainability, said Tomita.

"Our estimates show the Japanese market for plant-based foods will grow at an average annual rate of 27% in the coming years," said Hajime Mizukami, who oversees research on the health and food sector at TPC Marketing Research.

The figure, released in May last year, was meant to offer guidance to the retail industry based on sales projections for plant-based food products at supermarkets and other stores. But the same trend can be seen in the restaurant industry, according to the Osaka-based market research specialist. "Plant-based ramen has the potential to win the hearts and minds of health- and beauty-conscious consumers, as well as people who have avoided ramen for religious and dietary reasons," Mizukami said. 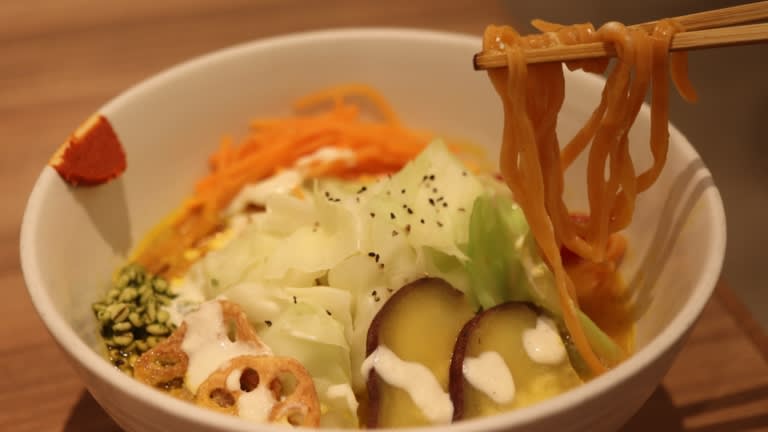 Soranoiro's signature Veggie Soba ramen is a favorite at its restaurant in Tokyo Station.

Plant-based foods are catching on globally. Rising concerns about the health of the planet are bad news for the livestock industry, which emits huge amounts of methane, a potent greenhouse gas. A growing number of people are opting for vegetarianism and veganism, and avoiding animal fat for environmental, health or other reasons. Demand for vegetarian and vegan foods is not as robust in Japan as in some other wealthy nations, but businesses are flocking to the market amid "a rising wave of interest in healthy, low-calorie, low-sugar diets," Mizukami said.

One smaller ramen chain, Soranoiro, has developed a solid following by offering vegetarian and vegan ramen dishes to health-conscious consumers.

Founded in 2011, Soranoiro runs four restaurants in Tokyo. Its Veggie Soba is made entirely from vegetables. It has a creamy broth flavored with the delicate sweetness of carrots. Its thick and springy homemade noodles are orange in color because paprika is kneaded into the dough. It festoons some of its ramen dishes with colorful and flavorful accents like tomato and sweet potato.

Soranoiro's founder, Chihiro Miyazaki, who spent nearly a decade making ramen for Ippudo, is another ramen visionary hoping to give the industry a makeover.

After the pandemic gripped Japan, Miyazaki opened a bakery next to Soranoiro's flagship shop in Tokyo. One popular menu item is yakisoba bread -- savory stir-fried noodles stuffed into a hot dog bun. In addition to being a tasty accompaniment to the bread, it helps cut down on waste. 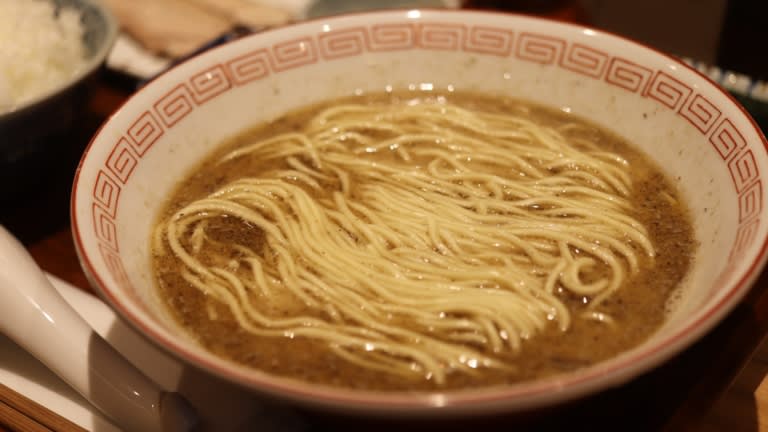 All the items on the menu reflect a commitment to sustainability, but Miyazaki is no crusader. "It is only natural to try to offer various choices to customers while reducing food waste. I've never tried to be especially committed to SDGs," he said, referring to the United Nations sustainable development goals. Sustainability is just an assumption underlying his business strategy, Miyazaki added.

A new ramen restaurant that opened in Tokyo's Kanda district in May is built on the concept of turning food waste into a competitive edge. The restaurant, Shiifudo -- a play on the word "seafood" -- offers menus featuring broths made from such seafood as mackerel, salmon and squid. Most of the fish used to make the soup are deemed unsuitable for sale for size and other reasons by wholesalers and would otherwise go to waste.

Mugen, the shop's Tokyo-based operator, also uses the fish at its Japanese-style pubs and sushi restaurants. The company's president, Masahiro Uchiyama, said operating different kinds of eateries can help reduce food waste of all kinds. The strategy not only cuts down on waste of marine resources but also helps Mugen to build stronger ties with fish wholesalers, Uchiyama said.

These restaurant chains highlight how contributing to the health of people and the planet can also be good for the bottom line.