Japan's sushi chain Sushiro going to Thailand and China in 2021

With population at home aging, group bets on Asia for further growth A Sushiro restaurant in Tokyo. The chain will slightly decrease the number of its shops in Japan but open many more abroad. (Photo by Ken Kobayashi)
NANA SHIBATA, Nikkei staff writerNovember 29, 2020 09:30 JST | Japan
CopyCopied

Japan's leading conveyor-belt sushi chain, to be renamed Food & Life Cos. in April, is planning to open its first restaurant in Bangkok next spring. The move is part of the company's strategy to increase overseas sales to about 10% of total sales in fiscal 2021, through next September, from around 0.1% in fiscal 2018. Sushiro plans to open 24 to 28 restaurants overseas in fiscal 2021, up from 20 in 2020, while new eateries in Japan will decrease by three to five.

The Thai opening will be followed by entering the Chinese market. Sushiro will set up its Chinese business unit by December and plans to open one restaurant by next September.

The chain will join other Japanese sushi shops vying for a piece of the lucrative Chinese market, such as Kura Sushi. Although due to the COVID-19 outbreak Kura Sushi has put off its plan announced early this year to enter the market, it still aims to enter China within three years. To double overseas sales to 300 billion yen ($2.9 billion) by 2030, Kura plans to open 1,000 restaurants, mainly in Asia.

A year after debuting on Nasdaq, Kura Sushi listed on the Taipei stock exchange in September to improve its presence in the region. A company spokesperson told Nikkei Asia that expanding in Asia is an inevitable step toward becoming a global brand like McDonald's. The representative added that the region's rising population is another reason for the expansion of the chain, which has already opened about 450 restaurants domestically.

Even before the coronavirus outbreak, Japanese sushi chains were rapidly expanding abroad under pressure from the aging of the population at home, but the crisis pushed them to move even faster. It remains unclear when the industry can get back to normal at home. 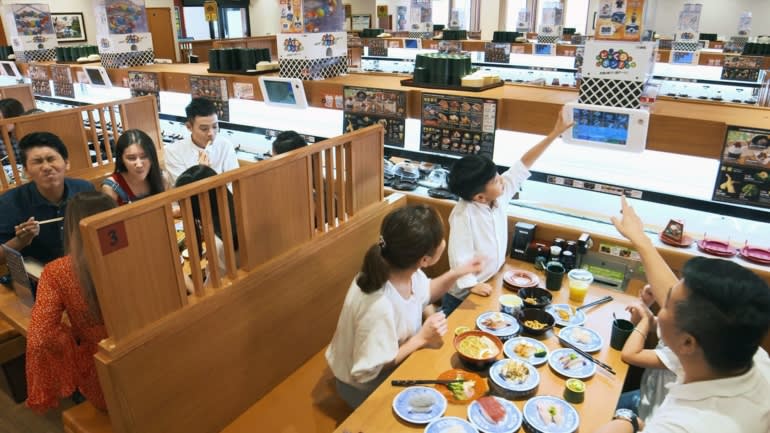 Akihiko Koga, CEO of Japan Food Culture, a Singapore and Tokyo-based consultancy for Japanese food franchises seeking expansion overseas, told Nikkei, "Many Japanese restaurants are now trying to diversify their business after the coronavirus outbreak." Before the pandemic, he said, chains mainly were operating in Japan, offering dine-in and takeout options, but now "they are forced to consider three options: domestic dine-in and takeout businesses and foreign markets," in particular Asian markets.

A complication is that each country and region has different coronavirus measures for restaurant operations. Koga said, "Taiwan, Singapore and Hong Kong are relatively recovering from the pandemic" in terms of the ease of operating food chains.

Speaking of his reasons for focusing on Asian markets, Sushiro Global Holdings CEO Koichi Mizutome said, "[Asia has] rice culture, and [Asian people] have a higher tolerance for raw fish." He added, "People understand Japan, and many people have traveled to Japan."

In contrast to Sushiro and Kura Sushi, another major Japanese chain, Genki Sushi, opened three restaurants overseas but closed nine from April to September, partly due to the pandemic.

Genki Sushi expanded into foreign markets starting in the early 1990s, almost two decades before Kura Sushi and Sushiro. Genki launched operations in Singapore in 1994 and opened restaurants in Hong Kong and Malaysia in 1995. But the competition is now intensifying.

Political uncertainties could also affect sushi chains. The massive pro-democracy protests in Hong Kong last year had a negative effect on some businesses and restaurants. Student rallies in Bangkok this year led to the shutdown of parts of the capital's commercial center. In South Korea, the nearest foreign market, Sushiro closed seven sushi bars in fiscal 2020 due to anti-Japan consumer sentiment as well as the impact of the pandemic.

But Sushiro CEO Mizutome said political uncertainties are "temporary," adding, "Food is an essential part of our lives."