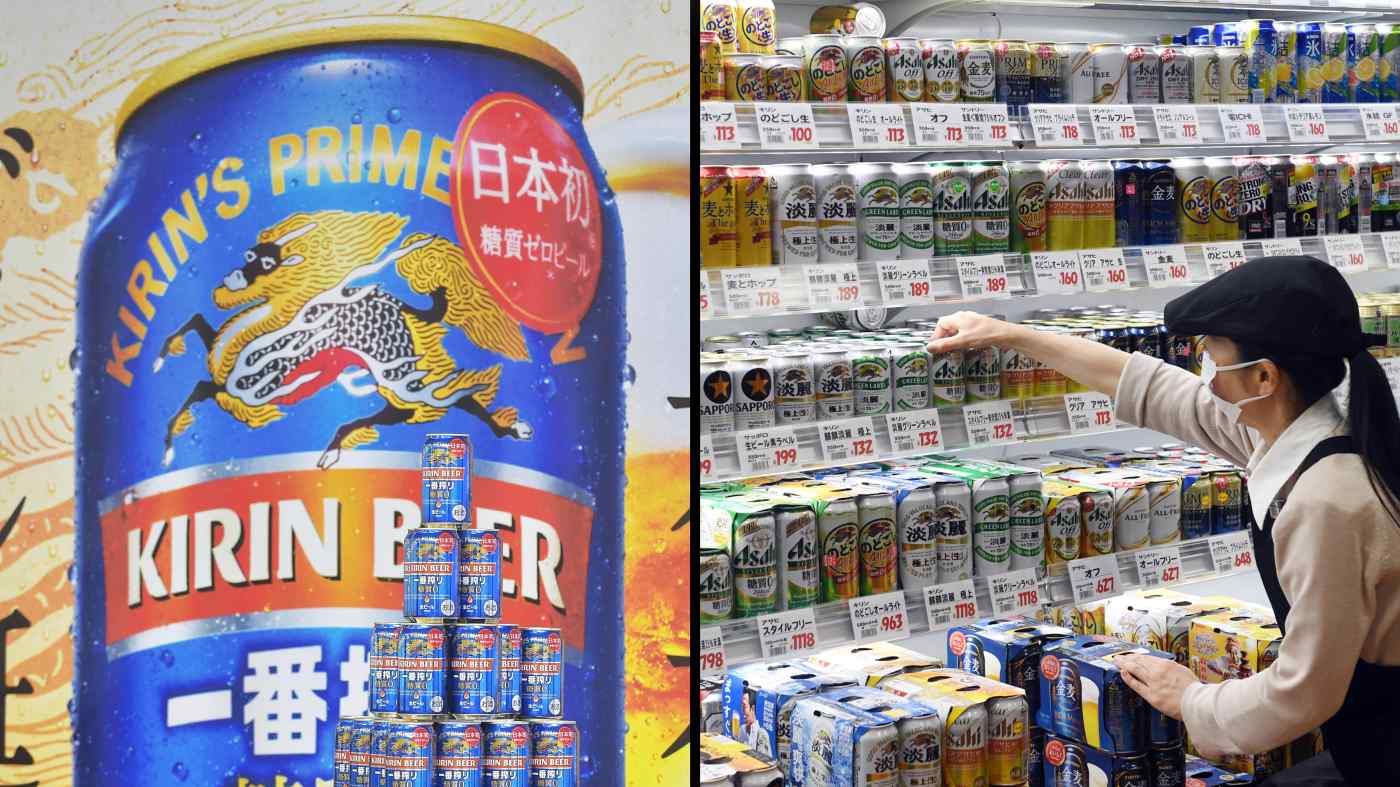 TOKYO -- Japanese brewers are trying to adjust to the coronavirus-ravaged landscape by developing healthier drinks and supporting the restaurant industry through e-commerce in hopes of boosting earnings.

Total beer sales in Japan, including retail and from the food service industry, is expected to fall by 20% this year to $28 billion from 2019, according to an estimate by Euromonitor International. Even before the coronavirus outbreak, the market for regular brews shrank in 2019 for the 15th straight year.

Now, with social distancing measures forcing restaurants and bars to either close or reduce opening hours, the outlook for the food and beverage industry is grim.

Kirin Holdings in early August revised down its operational profit forecast for the current fiscal year to 140 billion yen ($1.3 billion) from 191 billion yen previously announced due to the pandemic. For the April to June quarter, the brewer's net operating profit dropped 23.1% to 69.9 billion yen, in part hit by a fall in earnings at what used to be its highly profitable Australian subsidiary Lion, also a result of the coronavirus.

"We'll focus on the health category, which is the growth driver of the business," said Noriya Yokota, chief financial officer of Kirin, during a press conference to announce company earnings early August.

Kirin said the new focus on health drinks came about after sales in its products containing lactococcus lactis strain plasma, or live culture bacteria, doubled in the June quarter from the previous year.

The company also plans to roll out the country's first sugar-free beer in October under its Ichiban Shibori beer brand, as consumers become more health conscious.

"There were big technical hurdles to develop sugar-free beer. We made full use of our technology to expand the beer market," Takayuki Fuse, CEO of Kirin Brewery, a unit of Kirin Holdings, told reporters on Aug. 27. The company aims to sell 1.2 million cases this year.

On top of that, the company will also launch in October nonalcoholic Chuhai drinks that it had jointly developed with health supplement maker Fancl, in which Kirin owns a 33% stake. A Chuhai drink is, traditionally, a canned cocktail of shochu mixed with juice or syrup.

Its peer, Asahi Group Holdings, has also come under earnings pressure as sales from restaurants and bars tumble. Japan's biggest brewer said its net operating profit in the quarter ended June fell by 40.4% to 53.4 billion yen. For the full year, Asahi estimated a decline of 30.4% in operating profit from a year ago.

"Until now, the food-service channel (for example, restaurants, eateries) played an essential role in creating a trend and for branding," said Tomomi Fujikawa, an analyst at Euromonitor International. "The conventional way of experiencing food or drink at restaurants or eateries before consumption at home has collapsed. Companies are required to address the challenge of how to reach consumers without them experiencing new things at food-service outlets."

Asahi said it plans to expand a marketing campaign on social media to promote its healthier offerings such as nonalcoholic beer and low-malt beer.

Another key player in the industry, Sapporo Holdings, forecasts its operating profit for the current fiscal year will come in at 1 billion yen, down 91.5% from the previous year. The company said that although demand for beer and food for home consumption rose as consumers stayed home, it did not make up for the drop in sales from restaurants and vending machines.

To compensate for the fall in restaurant sales, Sapporo launched in August an online platform that also allows consumers to order food served at restaurants that sell Sapporo beer. More than 80 restaurants have now participated in the scheme and the brewer hopes that number will rise to 100.

Whisky producer Suntory Holdings is also trying to drum up support for restaurants by launching a project that sells vouchers to consumers for future use so that these eateries have enough cash flow in the meantime to maintain operation. More than 11,000 restaurants have joined the scheme and it had distributed 143 million yen of vouchers early August.

The world's third largest whisky maker saw a drop in both sales and operating income for the six months ended June, of 10.2% and 19.7%, respectively. Suntory did not reveal any forecast for the full year.