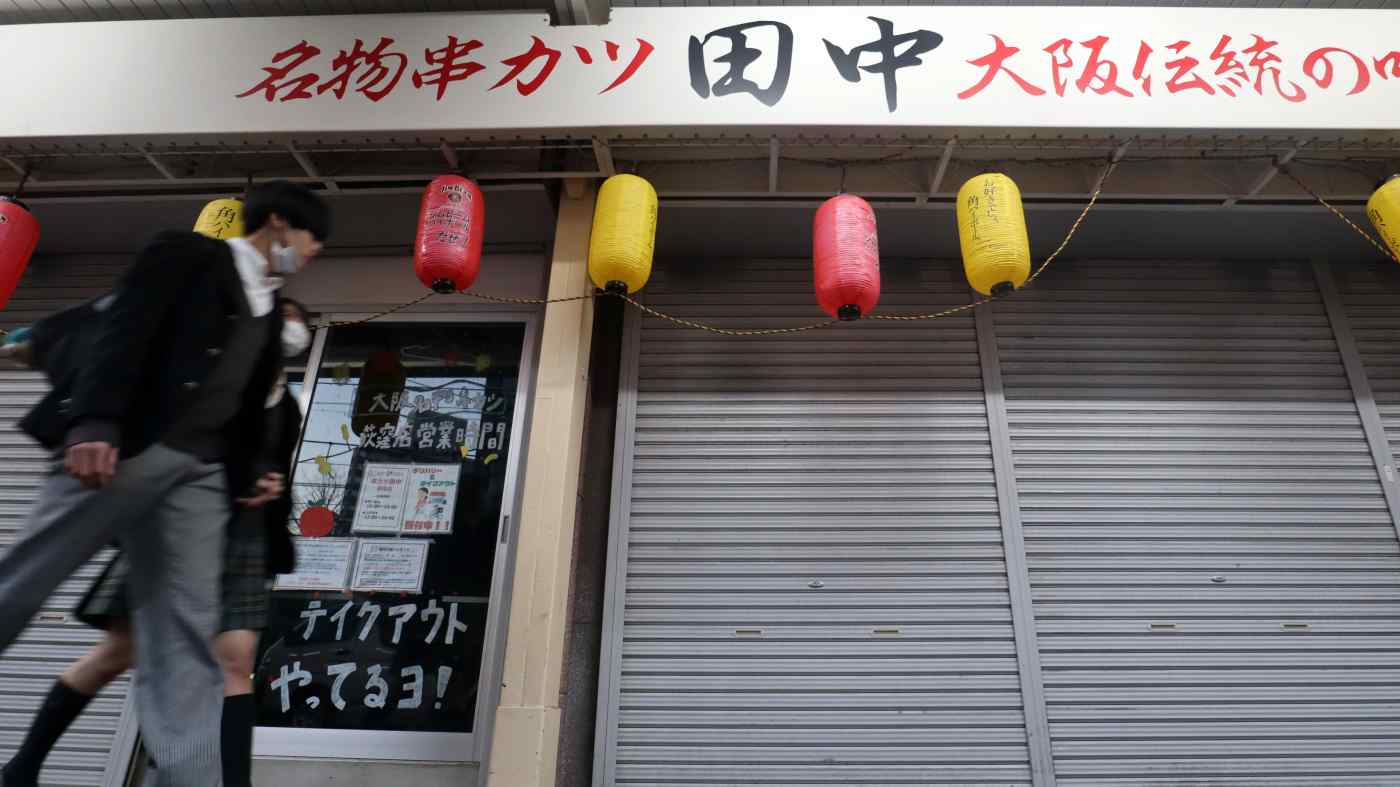 TOKYO -- Japanese restaurant chains are facing new headwinds from a state of emergency the government has declared to cope with a surge in COVID-19 infections.

The municipal governments of Tokyo and other major cities requested the declaration, which is expected to last until Feb. 7. Restaurants are being asked to close by 8 p.m., but compliance is largely voluntary, with no effective punishments for not heeding the curfew.

"We will not be profitable if we close at 8 p.m.," a representative of Kushikatsu Tanaka Holdings, the operator of a chain of izakaya Japanese-style pubs, told Nikkei Asia after the company decided to close 108 restaurants until early February. The representative noted that 7 p.m. to 8 p.m. is the eateries' busiest time. The company on Friday reported a net loss of 190 million yen($1.8 million) for the year through November.

Watami, which operates a chain of casual pubs, has temporarily closed 83 in Greater Tokyo. A representative of the chain said a decision was made against serving take-away and delivery items because "there is not much demand for take-away from izakaya."

In a news conference in early January, Miki Watanabe, chairman of Watami, said his company would be "in the red by 500 million to 600 million yen," due to one month of closures or shortened business hours.

Watami, which operates around 100 restaurants in Greater Tokyo, decided to suspend operations at 80% of them, keeping open about 20 that receive lunchtime demand. "If we stop serving alcohol by 7 p.m.," a representative said, "customers will not come. Most people cannot leave work that early, except for some people working for the government or large companies."

In December, sales at Watami's domestic food service business dropped around 60% from a year earlier.

The restaurant industry's falling sales are casting a shadow over sports sponsorships. Ringer Hut, which runs a chain of noodle eateries, on Tuesday announced the termination of its endorsement deal with gymnast Kohei Uchimura. It blamed "the deterioration of business performance far beyond expectations amid the coronavirus pandemic."

The noodle chain operator on Thursday said it suffered a net loss of 7.3 billion yen as it reported its consolidated financial results for the March-November period.

Saizeriya, a restaurant operator known for low-cost Italian meals, on Wednesday reported its net income dropped 80.9% to 250 million yen for its September to November period from the previous year.

In contrast to weak demand at eateries, food delivery services are experiencing a jump in orders. Although Online food-delivery site Demae-can posted a net loss of 3.5 billion yen for the September quarter due to investments, it made five times more deliveries than it did in the year-earlier period. People sterilize their hands before entering a Saizeriya restaurant in Tokyo on Jan. 14. (Photo by Ken Kobayashi)

After Japan's daily new coronavirus cases hit a record high of over 7,800 at the beginning of the year, the government on Jan. 7 decided to declare a state of emergency for Greater Tokyo. On Wednesday, Prime Minister Yoshihide Suga also put Osaka and other major cities, including Aichi and Fukuoka, under the emergency.

With the government asking residents to stay home even in the daytime except for urgent matters, analysts say there is a possibility of increasing numbers of bankruptcies in the food service industry.

In addition to the impact of the state of emergency, Japan's second since the pandemic began, "the effect of government financial support to restaurants is fading as the coronavirus continues to hit their business," Yoshihiro Sakata of Tokyo Shoko Research told Nikkei. "There is a growing possibility that the number of coronavirus-related failures in the restaurant industry will increase further in January."

According to Tokyo Shoko Research, 842 restaurants in 2020 filed for bankruptcy with debts of at least 10 million yen, up 5.3% from the previous year. Regardless of industry, the number of companies that filed for pandemic-related bankruptcies was 870 as of mid-January. Of those, 150 were in the food service industry, the highest proportion.

Sakata added, "There are many small companies and individual business owners in the restaurant industry, and the situation is more severe for them [than for large companies]."

A representative of a small izakaya in a Tokyo business district who asked not to be named said "there will be no sales" during the one-month state of emergency. As such, the company has decided to suspend operations. The government is offering small subsidies to bars and restaurants that heed the curfew, but "trying to survive on that alone is tough," the representative said.

The izakaya had been selling box lunches and focusing on take-away foods to make ends meet before the new state of emergency was declared. But this time, it "decided to temporarily close due to the number of infections rising every day and out of concern for the safety of our employees and customers."

Some companies are ignoring the requests to close early.

Global Dining, a Tokyo-based restaurant chain operator, on Jan. 7 announced that it will continue to operate as usual.

"[We] cannot meet the [government's] request to shorten business hours under the current government cooperation and support," CEO Kozo Hasegawa said in a statement released on Thursday. "It would be impossible to maintain business and employment" if we stopped serving at 7 p.m. and closed by 8.

Nobuko Kobayashi, a partner at EY Japan, said some restaurants "will be weeded out, and only powerful companies will survive." Kobayashi also said izakaya will have to redefine themselves so they do not have to "rely on the traditional office crowd and large parties."

If widespread vaccinations take place this year, Kobayashi said, there could be "revenge consumption," but the food industry's business environment will remain "harsh," especially in urban areas because remote work might continue after the coronavirus.