Despite limits, customers flock back to watering holes in Tokyo and Osaka 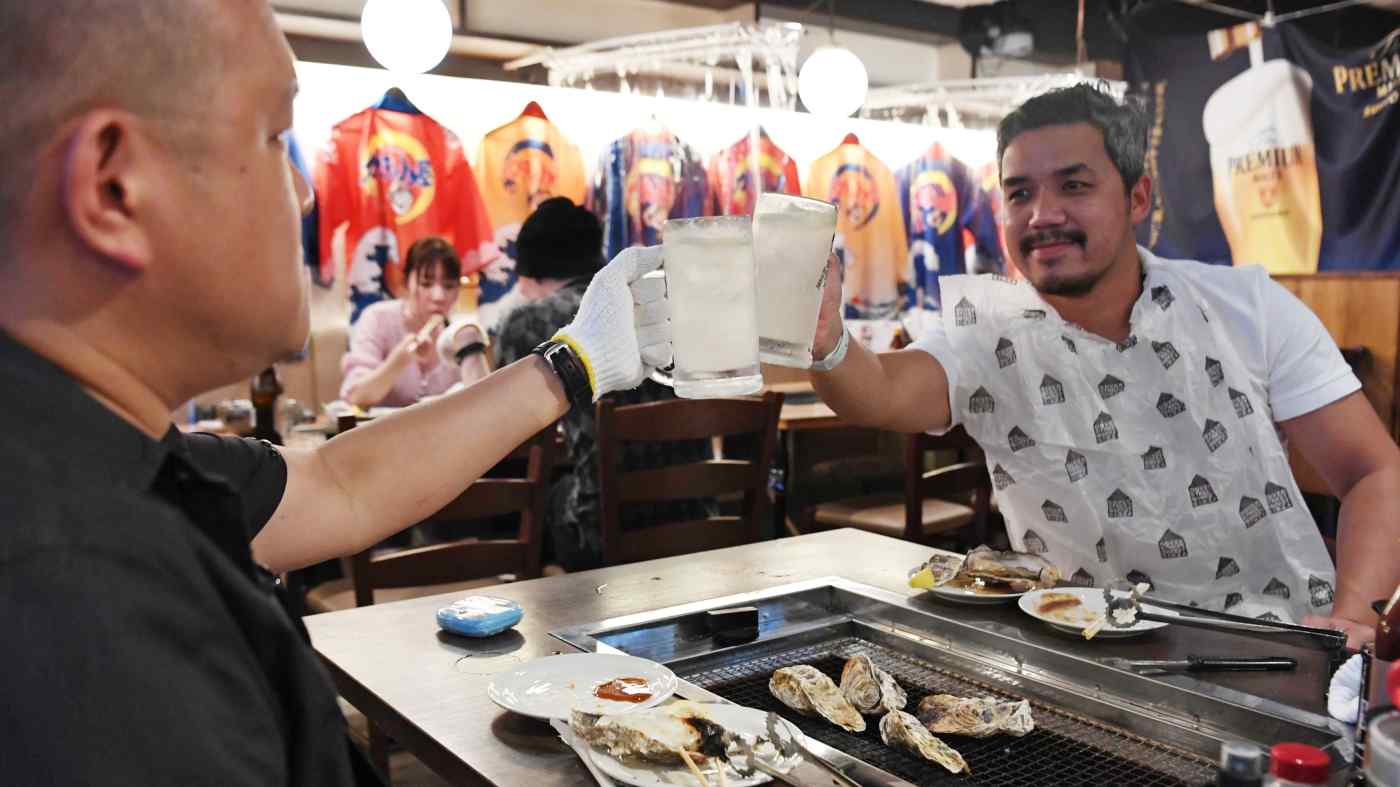 Patrons enjoy drinks at an izakaya pub in Tokyo on June 21. Under new guidelines, Tokyo and Osaka have asked bars to serve alcohol only to parties of up to two, and only until 7 p.m. (Photo by Karina Noka)
SUGURU KURIMOTO and KOHEI FUJIMURA, Nikkei staff writersJune 22, 2021 06:30 JST | Japan
CopyCopied

TOKYO -- Japan's lifting of the coronavirus state of emergency in areas including Tokyo and Osaka has brought alcohol back to bars and restaurants, to the relief of both drinkers and businesses battered by lockdowns.

Customers were drinking Monday afternoon at restaurants in Tokyo's Ameya Yokocho shopping district. An 86-year-old from the Tokyo suburb of Chofu ordered a mug of beer and a bowl of rice topped with sashimi. The man received his second vaccine dose early this month, and "got the urge to drink beer today," he said.

In the capital's Shinbashi neighborhood, two pairs of customers were drinking around 5 p.m. at an izakaya Japanese-style pub that had begun serving alcohol again.

"Alcohol made up most of our sales, and not being able to serve it crushed us," the proprietor said. "I'm relieved that there's been a little progress."

But businesses are not out of the woods yet, as local authorities fearing another resurgence in infections try to limit late-night crowds that could spread the virus. Both Tokyo and Osaka have asked bars to serve drinks only to parties of up to two, and only until 7 p.m.

In Osaka, a purveyor of okonomiyaki -- seasoned pancakes with vegetables, meat and seafood -- near JR Osaka Station opened Monday for the first time in about two months. But the manager's feelings were mixed.

"I'm happy to greet guests for the first time in a while, but the limits on the amount of time we can serve alcohol still make things tough," he said. With the restrictions loosened, Watami and Colowide have reopened their izakaya chains, while Saizeriya, known for its low-cost Italian eateries, has brought alcoholic drinks back to its menu.

The end of the alcohol ban is helping hotels as well. Diners ordered drinks with lunch at a restaurant in the Prince Gallery Tokyo Kioicho, where dining reservations jumped 50% from the previous week.

"Customers are gradually coming back," a representative at Prince Hotels said.

Using data from early 2020 as a base figure of 100 for comparison, traffic in Shinbashi rated at 61.5 around 6 to 7 p.m. Monday, a 9-point recovery from a week earlier. Traffic around Osaka's Dotonbori entertainment district rebounded 8 points. The Susukino district of Sapporo -- where looser restrictions allow groups of four to drink together -- enjoyed a 15-point bounce.

Some establishments are already flouting limits sought by local authorities. At least 10 sites in Ameya Yokocho had no plastic barriers between seats visible from outside. 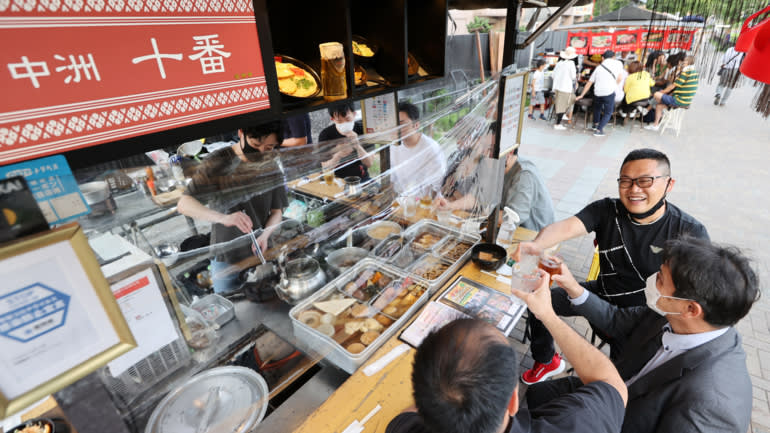 Patrons celebrate the resumption of alcohol sales at a food stall in Fukuoka, in southwestern Japan. (Photo by Shinya Sawai)

A check of 71 restaurants in Shinbashi on Monday night found that only 44 seemed to be following Tokyo's requests. Many others served alcohol past 8 p.m. or allowed groups of four or more, and they were nearly full, while at least one advertised hours running until 5 a.m.

Meanwhile, companies beyond the food service industry have begun easing restrictions on going to the office. Hitachi still keeps most employees at home, but has scrapped its 80%-85% target for remote work in regions where a state of emergency was declared.

Commuter travel is picking up. Activity around Tokyo Station on Monday during the hour from 8 a.m. recovered 2 points to 51.8. Osaka Station, with a reading of more than 99, has all but returned to pre-pandemic levels.

As companies start to allow trips and business dinners again as well, finding a balance between reverting toward normal activity and curbing the spread of the virus will remain a challenge.