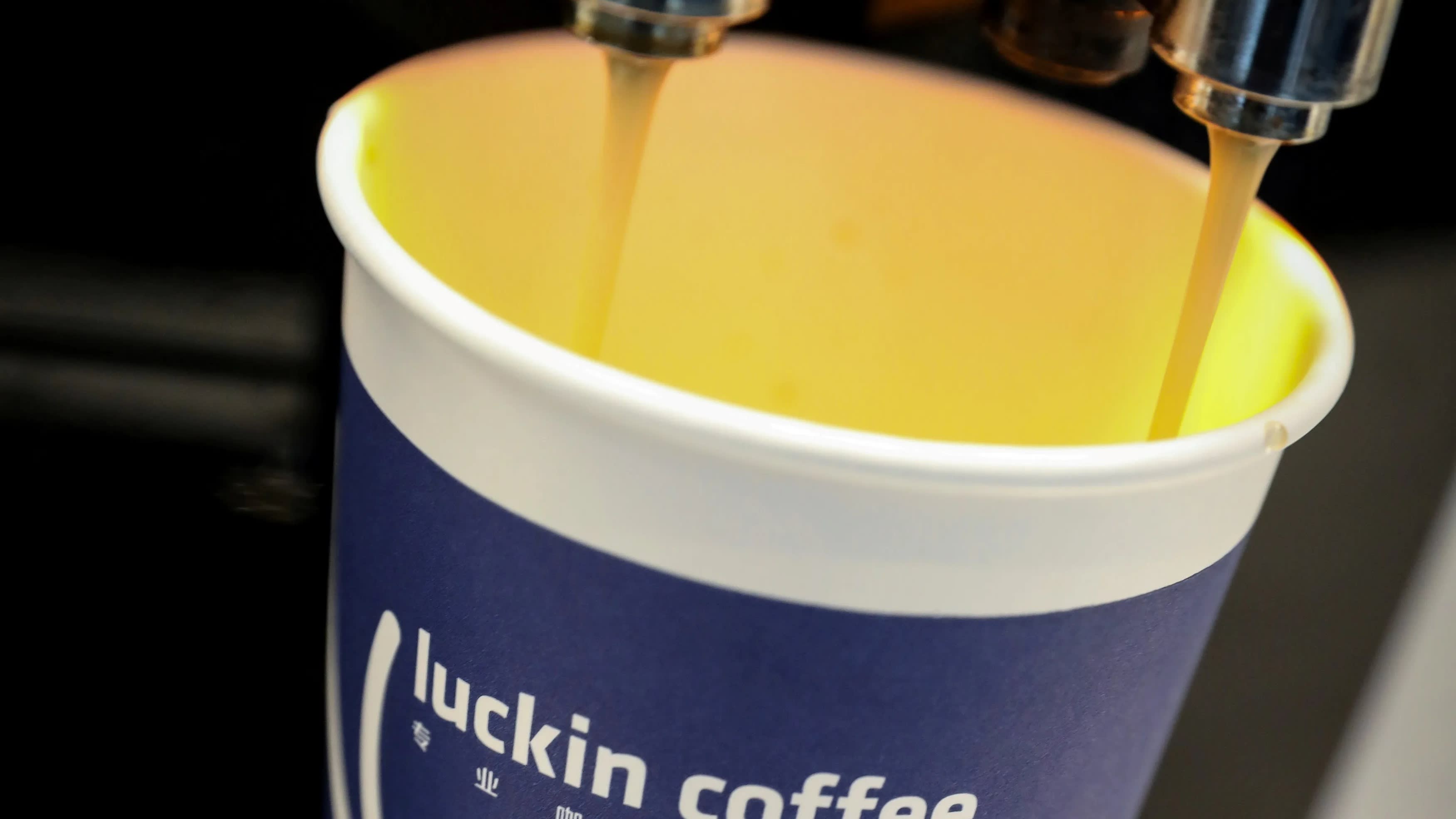 A cup of 'Luckin Coffee,' coffee is poured during the company's IPO at the Nasdaq Market site in New York, on May 17.   © Reuters
MARRIAN ZHOU, Nikkei staff writerAugust 15, 2019 00:54 JST | China
CopyCopied

NEW YORK -- Chinese startup Luckin Coffee is steaming toward Starbucks as it looks to become the largest coffee chain in China this year, the company said Wednesday.

The coffee chain is expanding aggressively, opening 593 new stores in the second quarter alone. With 2,963 outlets under its belt, Luckin now has Starbucks -- which boasts 3,600 stores across China -- in its crosshairs.

But that expansion comes with a heavy bill. Luckin reported unexpectedly deep losses Wednesday in its second quarter ending June, its first quarterly earnings since the company went public in May.

Luckin's net loss of $99.2 million in the quarter, or 48 cents per share, sank the company's stock price as much as 17% in Wednesday morning's trading in New York.

Luckin's expenses on marketing, opening and operating new stores reached $232.9 million during the three-month period, more than tripling from the same quarter in 2018.

"I'm pleased to say we're now on track to reach store-level break-even at some point in the third quarter," Jenny Qian Zhiya, Luckin's co-founder and CEO, said during the earnings call. "We remain on track to become the largest coffee network in China in terms of number of stores by the end of 2019."

On the upside, the company recorded revenue of $132.4 million during the April-June quarter, a 648% increase on the year.

Compared with Starbucks, Luckin offers cheaper prices, easy pickup, mobile ordering and fast delivery. The company in May raised $561 million through an initial public offering, with a price of $17 a share.

But the Xiamen-based chain has yet to turn a profit as it bleeds cash over store expansions and marketing promotions.

Luckin has been backed by private investors who pumped hundreds of millions of dollars into the young company. Before its IPO filing, Luckin announced a $150 million funding round that included money managed by U.S.-based asset manager BlackRock, which is also a major shareholder in Starbucks.

The company said it will continue to pour cash into marketing, as brand awareness is crucial to expanding its customer base.

Last month, Luckin signed a memorandum of understanding with Americana Group to establish a joint venture for opening coffee shops in the Middle East and India. Luckin said it is in constant discussions with Americana, though it cannot reveal more details.

"We're excited about the prospect of expanding the disruptive technology-enabled model outside of China," Qian said. "Our strategy is to combine Luckin's technology, branding and supply chain with the local knowledge and [partner with] local players."