Director Tamotsu Hiiro, 55, will take over as president and CEO on March 26, the company announced Friday. Casanova, 55, will become chairwoman.

Hiiro, who succeeded Casanova as president of unit McDonald's Japan in 2019, has been assisting her in pushing a mobile ordering app and expanding home delivery.

She faced challenges from the get-go. Reports that McDonald's had been using chicken from a Chinese supplier accused of shipping expired products sent sales plunging. Even her demeanor in news conferences drew criticism as "distant." The company reported two consecutive years of net losses in 2014 and 2015. 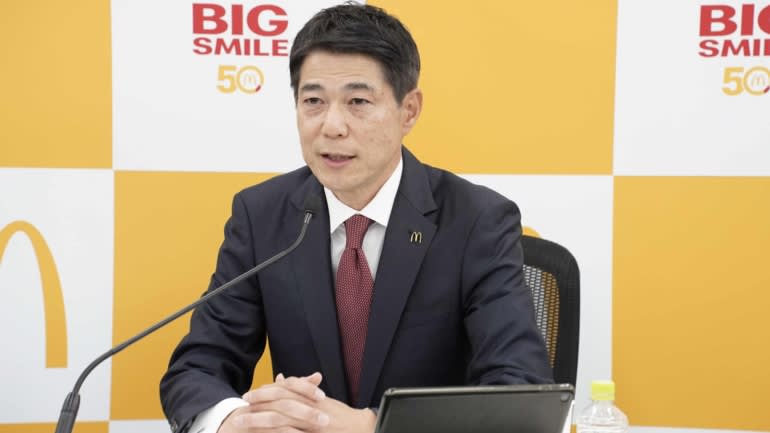 Tamotsu Hiiro, named as the next CEO of McDonald's Holdings Japan, speaks at a news conference. (Photo courtesy of the company)

But Casanova would not give up. To rebuild public trust, she promoted store upgrades and introduced an app to accept customer input at each location. A special nighttime menu helped broaden the customer base. As families returned to the Golden Arches, existing-store sales grew on the year for 51 consecutive months through February 2020, before the coronavirus began to take a toll.

Despite her superb record as a manager, Casanova struggled to groom a successor in-house. She recruited Hiiro from Johnson & Johnson here and put him in charge of McDonald's Japan in 2019, giving him two years to prepare for replacing her. Until now, simply following Casanova's business model guaranteed strong earnings. The record operating profit last year is credited to her efforts on the mobile app, which lets customers order before arriving at the store.

But the pandemic has prompted other restaurants to introduce similar apps, eroding the company's advantage, an industry insider observed. Existing-store sales are close to plateauing, and "another record profit is a tall order," a brokerage analyst said.

At a news conference Friday, Casanova stressed that the company has entered the next stage of growth, to be led by Hiiro.

McDonald's marks its 50th anniversary in Japan in 2021. The fast-food giant needs to keep offering new attractions to draw customers in order to continue on its growth path. A McDonald's in Tokyo: Incoming CEO Tamotsu Hiiro has been working on home delivery in Japan. (Photo by Kosaku Mimura)