Mos Burger turns to Vietnam for expansion and talent pipeline

Local college students to be trained for employment in Japan With interest in a healthy diet on the rise in Vietnam, Mos Foods hopes to gain a large fan base. (Photo by Ryosuke Eguchi)
RYOSUKE EGUCHI, Nikkei staff writerFebruary 22, 2020 07:15 JST | Vietnam
CopyCopied

TOKYO -- Mos Burger will launch restaurants in Vietnam this year while also training young locals to work in labor-short Japan before returning home as managers.

Mos Food Services, the Japanese company behind the fast-food chain that touts fresh and domestic produce, plans to set up a joint venture in Vietnam as early as March and open about 10 stores in three years.

The company has also teamed up with a university in the city of Da Nang, launching a program where students learn Japanese and undergo restaurant management training. The plan is to hire 50 people this year for employment in Japan under its new work visa program, with the tally expected to reach about 350 in four years.

Mos, which opened its first restaurant in 1972, is turning to young Vietnamese to help many of its aging franchisees that are increasingly having difficulty finding workers in Japan. Giving support to these individuals is critical for the company to maintain its store network at home, where 1,073 of its 1,386 locations are franchisee-operated.

The strategy is to turn to Vietnam and elsewhere in Asia for workers, develop their skills in Japan and send them back to their home countries as executives responsible for local operations.

This long-term strategy started when Chairman Atsushi Sakurada met with four Vietnamese women at an employee gathering back in June 2018. "We want to bring this taste to our country," they told Sakurada in Japanese.

Seven months later, he headed to Ho Chi Minh City to check out the market and the business environment himself, including supplies of ingredients. There, "I felt the same passion that Japan used to have," he says. 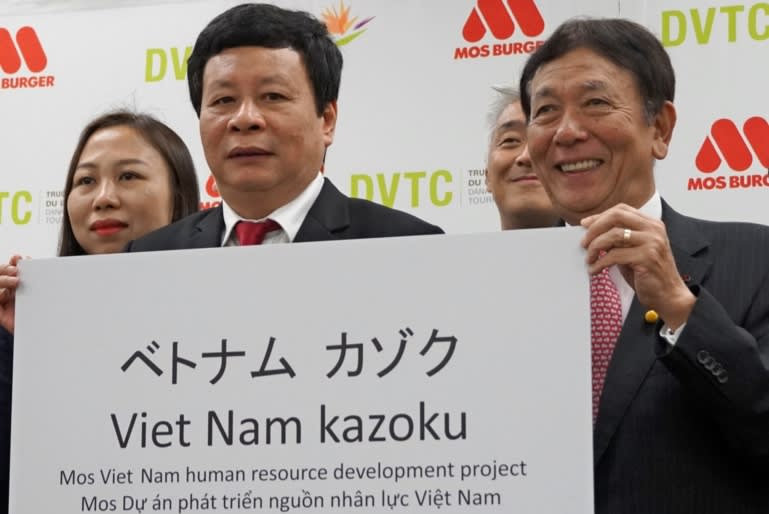 The time is ripe to enter Vietnam, where disposable income is increasing and appetite for international food is growing. Interest in a healthy diet is also on the rise, providing Mos -- which prides itself in using plenty of fresh vegetables -- with an opportunity to gain a large fan base there.

Illustrating the chain's Asian drive: its 100% plant-based burgers, set to debut this summer in Japan, can also be easily served in China and elsewhere because they do not contain ingredients that vegetarians in the greater Chinese market generally skip, such as onions and garlic.

Mos seeks to lift sales in overseas markets to 35 billion yen ($313 million) by fiscal 2021 from 30.8 billion yen three years earlier. The challenge in Southeast Asia is getting locals -- who are used to eating wallet-friendly street foods -- to eat its burgers and fries, for which customers in Japan pay more than at McDonald's.

Another test for Sakurada abroad will be to build a Mos family atmosphere that includes customers and staff. He learned a lesson while serving as head of the Taiwanese business in 1990, when the company made its first overseas foray before opening its first store there the following year. Local employees shunned Sakurada, saying that they did not feel "love" from the interpreter-dependent Japanese manager. This inspired him to study hard to learn Chinese so he could speak in their language.

Mos has named the Da Nang training program "kazoku," or family in Japanese, underscoring Sakurada's effort to create a workplace based on good communication suited to the local market and personnel.