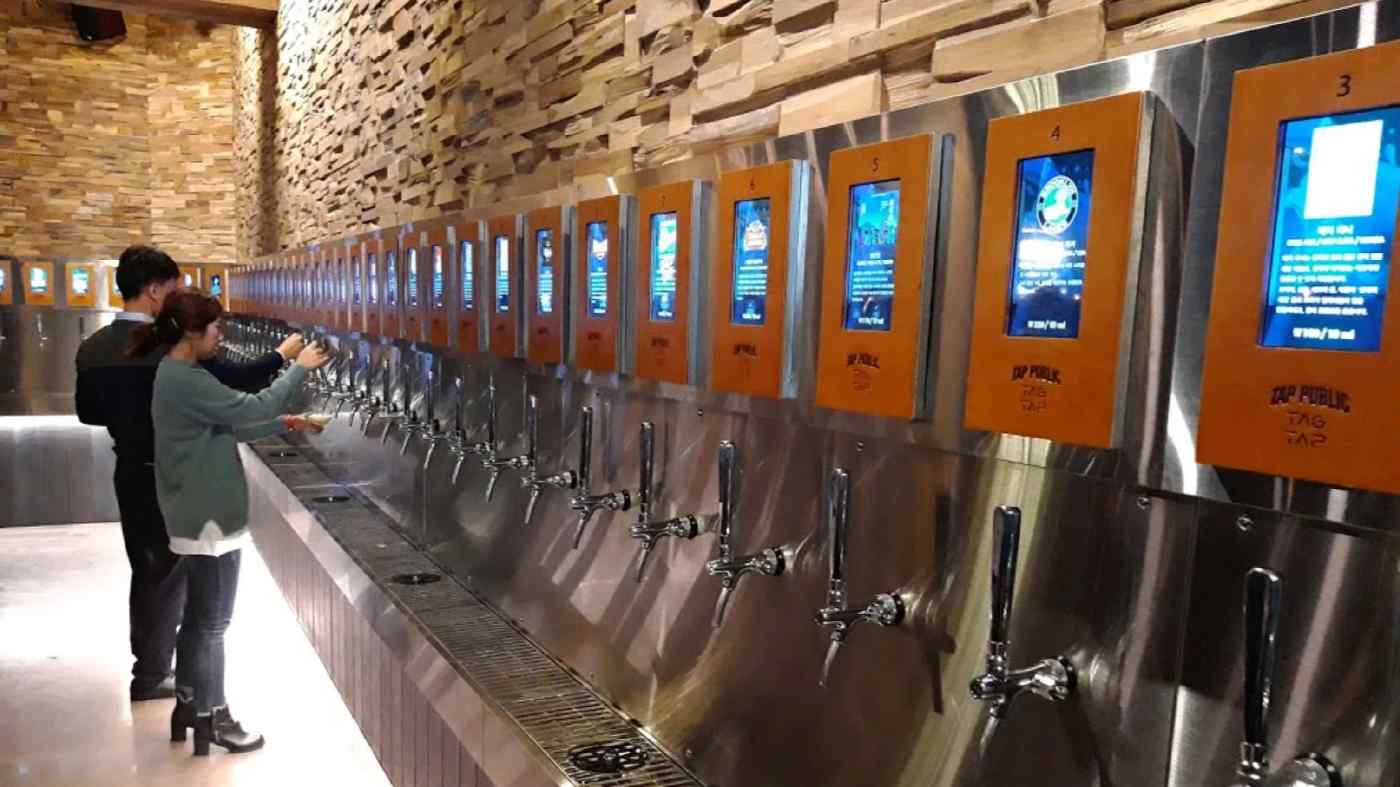 SEOUL -- An upstart bar chain in South Korea's capital is attracting crowds of after-work drinkers with a splash of variety, a twist of technology and a chance to be their own bartenders.

At Tap Public, patrons can choose from 60 kinds of beer, procured from small domestic breweries as well as Europe, the U.S., Southeast Asia and elsewhere. The customers are handed wristbands with embedded chips that automatically record the brand and amount they dispense from taps that line the walls.

"This one goes down super easy," said a 35-year-old woman enjoying a girls' night out with three friends. "Try it."

She said she had sampled more than 10 brands, mainly craft brews. "Pouring the beer myself is new and refreshing. It's fun to try different brands."

Tap Public's business model is shaking up the Seoul bar scene, appealing to cost-conscious young people. Food and drink prices are set to keep the average customer's bill to a manageable $30 to $40. Though the initial setup costs are high -- to cover the wristband system and the servers -- operating expenses are low since little labor is involved.

The concept is the brainchild of Kevin Moon, who opened Seoul's first Tap Public in November 2017. His company now runs two establishments -- one in a downtown area and another in an office district -- and plans to open a third in December. A fourth is to follow next year, and Moon is not limiting himself to South Korea. The wristbands Tap Public uses are equipped with RFID chips -- radio-frequency identification devices that communicate with the beer servers to track purchases.

"We plan to open self-service beer bars in Japan and Southeast Asian countries," he said.

Moon grew up in the U.S. and worked for a bank after graduating from university. He went on to establish a chain of ice cream shops in America, which worked a lot like Tap Public. Customers would dispense ice cream from machines and choose their favorite toppings, from chocolate chips to dried fruit. The business grew to 100 outlets at its peak, including franchises, before Moon sold it.

Now he has focused his energy on the evolving South Korean alcohol market.

For many middle-aged South Korean men, poktanju, or "bomb drink," is the tipple of choice. This is a mixture of two alcoholic beverages. The country's major brewers, meanwhile, tend to produce light beers.

Younger consumers, however, have developed a taste for richer, more creative craft beers. This has sparked a flurry of small brewery openings. Tap Public offers drinkers a chance to try something new -- and then try another, and another.

"We replace the brands when the season changes to maintain an interesting lineup for repeat customers," Moon said. Tap Public has found the pay-for-what-you-pour system appeals to young women, in particular, who would rather try multiple brands in small doses.

On a typical weeknight, one of the Tap Publics fills up by around 8 o'clock. Groups of women in their 20s and 30s occupy many of the 120 seats. They sip beers while nibbling on food meant to complement the brews, from crispy fried chicken and spicy Mexican dishes to pizza topped with heaps of cheese.

Another aspect of Tap Public's appeal is its Instagramability: Customers get a kick out of snapping pictures of themselves pouring beer and posting them online.