TOKYO/BANGKOK-- Some of the world's biggest beverage groups smell fresh growth opportunities in Southeast Asia, where health-conscious consumers are passing over customary sweet teas for low- or no-sugar coffees.

Their price range reflects the rise of the region's booming middle class. The Boss coffee sells for 25 baht to 35 baht ($0.77 to $1.07) per bottle, a premium of about 20% over the typical canned coffee in Thailand.

The brand is aimed at "white-collar workers and others who like premium drinks," a spokesperson for the Suntory Holdings soft drink unit said.

Thailand is an important market for Suntory Beverage & Food. Drink sales there and in Vietnam drove half of its Asia-Pacific revenue of 215 billion yen ($1.88 billion) for the January-September period, up 11% on the year. 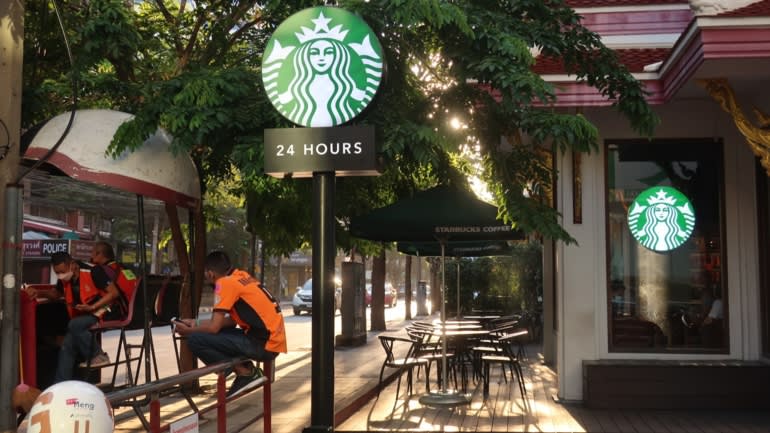 A Starbucks in Bangkok: Nestle will sell bottled and canned Starbucks drinks in Southeast Asia. (Photo by Marimi Kishimoto)

The Japanese company will use the tea distribution network it developed through joint ventures since the 2010s with local partners as well as PepsiCo. Possible moves going forward include taking coffee drinks elsewhere in the region.

Rising incomes in the region give its coffee market growth potential.

The middle class in the 10 member states of the Association of Southeast Asian Nations will reach 350 million people in 2030, more than double the 2015 total of 135 million, according to a 2021 report from the Hawaii-based East-West Center and other researchers. Middle-income people are projected to account for 51% of these countries' total population in that year.

Consumer behavior is also changing. Sweet teas have long found favor in a region known for its hot and humid climate and spicy foods. But in recent years, consumers, especially urbanites, are moving to black coffee and other no- or low-sugar alternatives. Rising health awareness during the COVID-19 pandemic has quickened this trend.

"I'm avoiding sweetened and flavored drinks, so I drink straight black coffee," said a 35-year-old Bangkok office worker, who says she drinks a cup a day.

The introduction of so-called sugar taxes on sweet drinks has also played a role. These levies implemented between 2017 and 2019 in Thailand, the Philippines and Malaysia have "helped drive consumers toward no- or low-sugar coffee," said an industry source.

Nestle, the world's biggest food and drink group, is set to bring bottled and canned Starbucks beverages that have been popular in other parts of the world to Southeast Asia next year. The Swiss giant will sell Doubleshot, Frappuccino and other drinks through supermarkets and online retailers, tapping both its own bottling plants and local producers.

The company will "benefit from new growth opportunities" in the ready-to-drink business that is "attracting new and younger consumers," it said in a statement.

Suntory's Japanese rival Asahi Group Holdings is expanding its Wonda coffee brand in the region, launching instant coffee -- the company's first -- in Malaysia this October, complete with a halal certification for the Muslim-majority market. The company, which sells Wonda products in Singapore and Brunei, will consider also selling instant coffee in other markets.

Demand for coffee is expected to continue to grow in the region, home to major coffee bean exporters Vietnam and Indonesia. The market in eight Southeast Asian economies is on track to reach $8.1 billion in 2026, up 14% from the 2020 level, according to research firm Euromonitor.

For multinationals eyeing the region's coffee drinkers, "the biggest challenge is price," according to a manager at Asahi Group Holdings.

Lower prices than in Japan or Western markets make "turning a profit difficult," this person added.