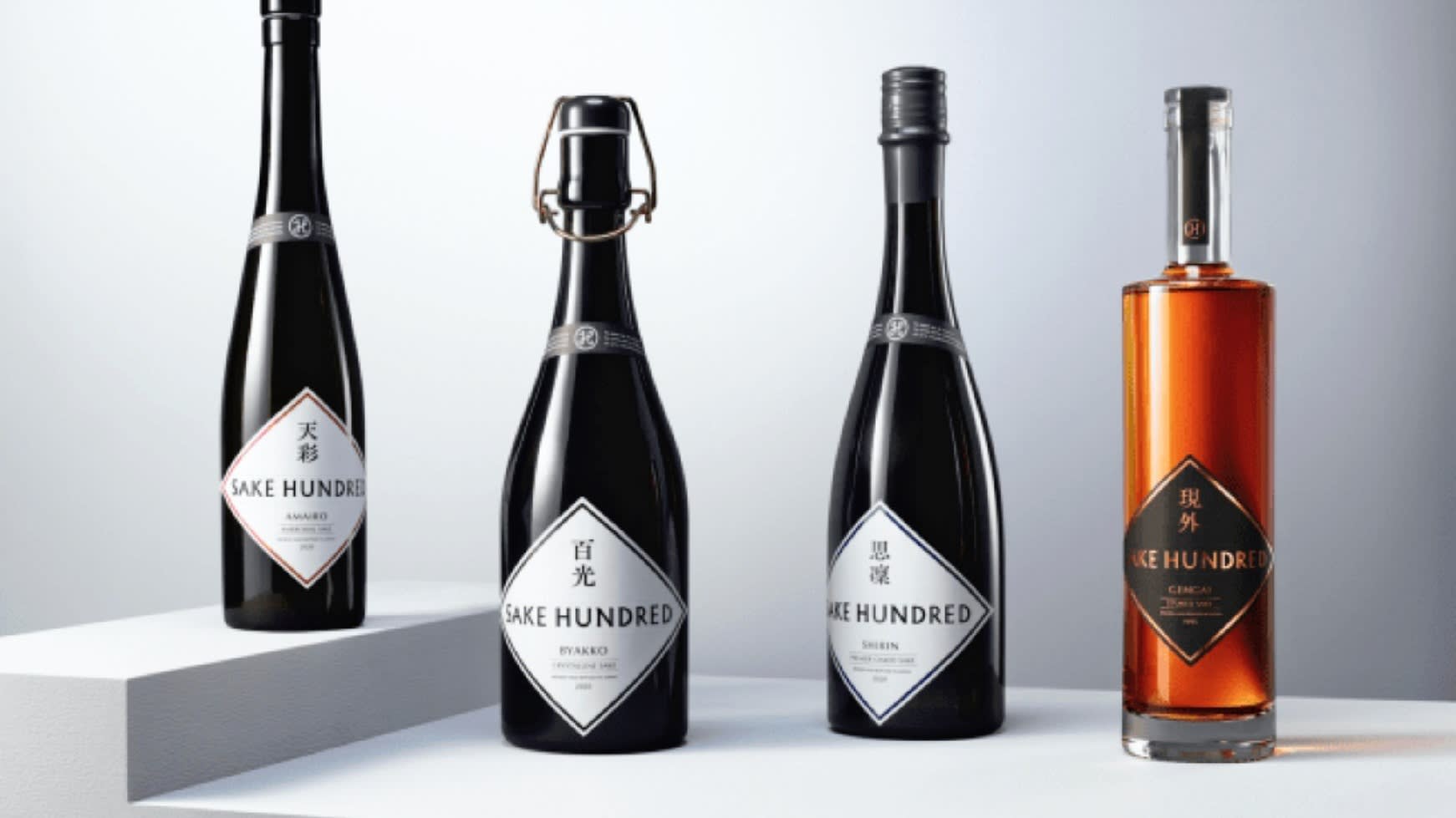 Clear sake has taken a page from the computer chipmaking industry, relying on other companies to make its luxury-brand beverage while marketing through its own website and social media.
AMI YAMADA and MASAMITSU ITO, Nikkei staff writersSeptember 12, 2020 12:11 JST | Japan
CopyCopied

TOKYO/HAKODATE, Japan -- Sake, the staid but nuanced alcoholic drink emblematic of Japan, is now being transformed by startups looking to trash tradition to tempt a wider global audience.

The upstart brewers still base their beverage on rice but are upgrading the libation with yuzu, ginger and other ingredients to create new aromas and color to the typically clear drink. Others are taking a page from the vintage wine book and selling aged sake that can cost thousands of dollars per bottle. And as domestic sake production fizzles, many are looking overseas.

At a winery on the outskirts of Paris, sake brewer Wakaze has commandeered wine barrels from Burgundy to age sake. The Yamagata Prefecture maker bases its brew on France's hard mineral-rich water, unlike the softer waters in Japan. Wakaze also uses locally grown wine yeast and rice from the south of France to promote local production and consumption.

The success of Wakaze sake is evident at the dinner table, as the company focuses on producing "sake that marries well with Western food," said CEO Shintaro Iwai.

The difficulty using hard water emerges in the fermentation process, something that Chief Technical Officer Shoya Imai has mastered after working at four breweries. "I'd like to share hard-water brewing techniques to bring sake to other parts of the world," Imai said. Wakaze, a sake maker based in Yamagata Prefecture in northeastern Japan, set up a brewery in France.

Wakaze, founded in 2016, has been doing well. In 2019 it raised 150 million yen ($1.4 million) from several venture capitalists -- a rare feat for a sake maker in light of an overall decline in the industry. But investors are optimistic about the company's overseas operations.

Brewing in France eliminates export and transportations costs to keep prices competitive on the continent. "Imported sake costs three to four times more than in Japan," said Iwai. "This has hindered the spread of sake overseas." A bottle of his signature French-made brand, C'est la vie, sells for about 19 euros ($22).

Sake is also evolving as it ventures beyond Japan. Wakaze has come out with a botanical variety flavored with Japanese pepper and tea leaves. It has a vivid aroma and spiciness and is brewed to order in Yamagata Prefecture. "We've created diverse sakes that go perfectly with heavily flavored or oily dishes," said Iwai, noting that such cuisine usually does not go well with traditional sake.

To bolster its brand, Wakaze has opened a bar in Tokyo that pairs Western food with its products. An independent brewery is part of the restaurant, its four large silver tanks gleaming against a glassed-off wall. Wakaze has won numerous awards and has expanded into seven other countries and regions. 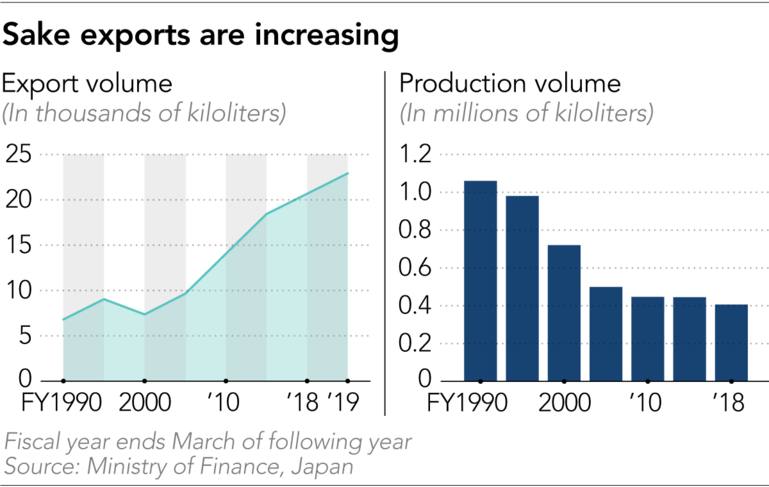 Business has been tough for sake makers in the domestic market. Production in fiscal 2018 reached 406,000 kiloliters, according to the National Tax Agency, down more than 60% from fiscal 1990. Along with dwindling production, the number of makers is also dropping. As of October 2017, there were 40% fewer manufacturers than in the same month in 1990.

This has prompted sake brewers to look overseas. The sector exported 23,000 kiloliters in fiscal 2019, up 3.4 times from fiscal 1990. The value of shipments is growing even faster: up 8.5 times over the same period.

Tokyo-based Clear is another company trying to extend sake's reach. Its bottled Byakko garnered the top rating in a competition judged by about 100 French sommeliers.

Clear was founded in 2013 and has since raised about 350 million yen. President and CEO Ryuji Ikoma said the company will eventually go public, driven in part by its Sake Hundred brand, an upscale drink that goes well with different types of cuisine.

Its most exclusive product is Gengai, which costs about 150,000 yen per bottle. The drink has been aged for 25 years -- a rarity among sakes -- and looks like whiskey. It sold out as soon as it went on sale in Japan. The company plans to host events with chefs from high-end restaurants on the west coast of the U.S. and in China to promote the brand. Ikoma is representative of a new breed of sake masters. Instead of leaning on tradition and the tried and true, he acts fast and travels far, visiting some 300 breweries across Japan in an immersive experience to explore sake's potential. Long-term aging was something he uncovered amid his travel. He has been building relations with brewers that are willing to put his ideas into practice through commissioned manufacturing.

The company also produces a new type of beverage that it calls Amairo, which costs 14,000 yen for a 500-milliliter bottle. Amairo starts out as sake, using the drink's inherent umami to create a thicker and richer tasting dessert sake, an entirely new type of sake used to finish a meal.

To ensure wide exposure, Clear is being marketed in Saketimes, an online site the company runs for sake aficionados overseas. It has an English-language version for overseas readers and serves about 400,000 visitors per month from 160 countries.

Clear does not make its own beverages, relying instead on contract brewers to produce its beverage to specifications.

As sake penetrates previously untapped markets, new breweries in Japan are popping up. Kamikawa Taisetsu Brewery, located in the town of Kamikawa in Hokkaido, used crowdfunding to set up shop at Obihiro University of Agriculture and Veterinary Medicine, known for its food research and education. Working with the National Institute of Technology, Hakodate College in Hokkaido, the company is trying to break new ground by developing its own yeast strains.

There is a new brewery going up in the town of Nanae, also in Hokkaido. Hakodate Jozo began construction in August and will start operations in February 2021. It is the first time in 35 years that sake will be made in the southern part of Hokkaido. The brewery will work with a startup founded by Future University Hakodate, a public university known for its work in artificial intelligence.

Archis, a sake maker in Yamaguchi Prefecture, has created its own sake called Mujaku, a high-end drink marketed overseas that is aged for long periods like wine. One 750-milliliter bottle recently sold for 600,000 yen in Dubai.

The overseas push by Japanese sake startups is also having a knock-on effect in other sectors. Rasterize, a Hong Kong-based ad agency, has begun offering sales and logistic support spots for sake makers on TikTok.