Suntory to double output of gin with Japanese flavor As of this month, the Japanese beverage maker has exported the product to 46 countries and regions, including India, Thailand and China.

Now it is thirsty for more growth. Suntory will invest about 2 billion yen ($18.6 million) to increase production at a plant in Osaka. The bottling capacity will double and will come online in 2022.

The company is accelerating its overseas expansion to shore up growth as Japan's market ages and shrinks. Younger people also drink less alcohol.

Gin will be one of the pillars in Suntory's global strategy, as production capacity for its mainstay whiskey remains constrained due to its popularity.

Roku means "six" in Japanese and refers to the six Japanese ingredients. Many fans of Japanese craft gin first encounter Roku at bars and duty free shops when they visit Japan, according to the drinks maker.

In 2019, Suntory sold about 230,000 cases of Roku worldwide and hopes to raise that figure to more than 1 million cases in the medium to long term by adding to its production capacity. To reach its target, the Japanese distiller will launch a new brand called Sui on March 10 in Japan. The gin uses Japanese ingredients such as Yuzu, green tea and ginger, which Suntory says goes well with Japanese cuisine. 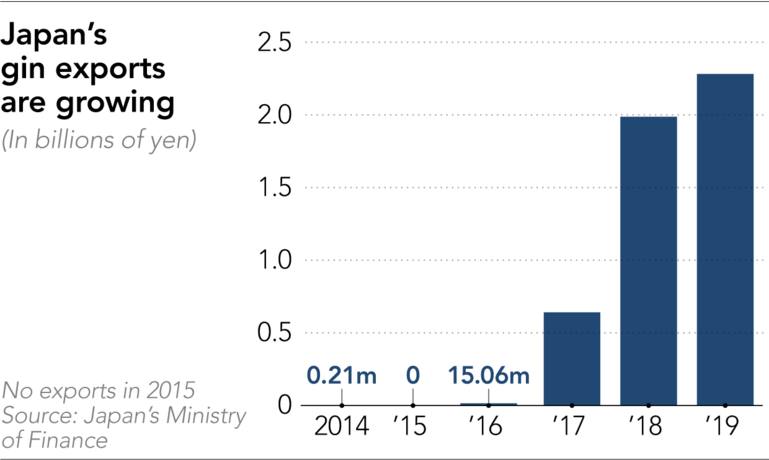 While Roku is positioned as a premium brand and sells for around 4,000 yen in Japan for a 700 milliliter bottle, Sui is priced at a more modest 1,380 yen. By the end of the year Suntory hopes to sell 30,000 cases of the new product. The company has not decided whether to market the product overseas.

According to the Ministry of Finance, the value of Japan's gin exports reached 2.28 billion yen in 2019, up 14.8% from the previous year.

The growing popularity of Japanese gin is conspicuous in the Asia-Pacific region, and is helped by rising incomes as people try pricier foreign drinks. Roku's sales volume doubled last year in the region, tripling in Singapore.

Unlisted Suntory Holdings's sales rose 2% on the year to 2.3 trillion yen in 2019 helped by strong sales of its Boss brand coffee drinks and Beam Suntory, its U.S.-based whiskey distiller.