BANGKOK -- Food manufacturers in Thailand are starting to farm cage-free chickens after pressure from U.S. and European buyers, many of whom are committed to improving animal welfare.

Companies like Nestle, McDonald's and Walmart have set a target of sourcing only cage-free eggs by 2025. Thai food manufacturers have little choice but to comply.

Eggs from cage-free hens are pricer than those from hens kept in battery cages, a practice widely used in Asia but viewed in the West as being cruel. Cage-free chickens are also thought to be healthier than birds that are packed together in tiny cages with little room to move.

Charoen Pokphand Foods, the food-manufacturing arm of Thailand's largest conglomerate Charoen Pokphand Group, will increase production of cage-free eggs in Thailand, which amounted to 5 million in 2019, or only 1% of total egg production.

At CPF's Wang Somboon Farm in Saraburi Province, chickens roam about in air-conditioned barns. The company set up its first cage-free chicken farm in 2018.

Sawdust covers the floors, and there are perches and other areas for hens to lay eggs. The barns are equipped with automatic systems for lighting, temperature and ventilation. A vendor sells vegetables in front of a truck loaded with chickens in Srinagar, India in 2012. Asian food producers have recently been under pressure to improve animal welfare.   © Reuters

"Our hens feel comfortable all the time," said Somkid. "This helps to reduce their stress and make them healthier and happier. Because of this, CPF's cage-free hens are raised without antibiotics."

Prasit Sujiravorakul, an analyst at Bualuang Securities, said Thai agricultural companies are under more pressure than their Asian counterparts because they sell more to Europe and the U.S., where food hygiene standards tend to be higher and there is greater emphasis on animal welfare and sustainability.

Despite the higher price, Thai consumers seem to be warming to the idea. "I believe chickens must live happier lives, and be free from cages," said Thitiya Muinying, a Bangkok freelance worker in her 30s. "If the quality and size of the eggs are the same, the price difference is OK."

As demand grows, the government is backing industry efforts to improve farming methods. The Ministry of Agriculture and Cooperatives plans to set standards for cage-free egg production as early as 2021.

CPF believes that early government action -- before that in neighboring countries -- will give Thai food producers an edge. "Once our cage-free standard is official, Thailand's egg products will enjoy greater trade and marketing opportunities, particularly when it concerns premium restaurants and leading modern trade channels," said a CPF official. 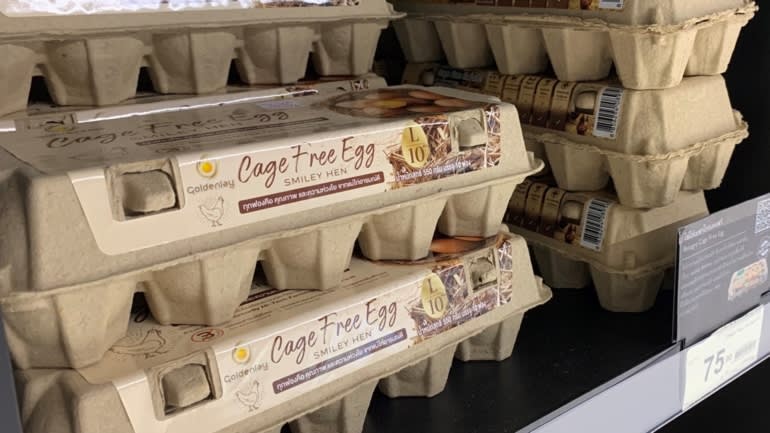 Cage-free eggs line a shelf at a supermarket in Bangkok. Asian consumers are beginning to become more aware of the welfare of livestock. (Photo by Marimi Kishimoto)

This trend has also extended into pig farming.

CPF plans to reduce conventional invasive treatments such as cutting the teeth of piglets to prevent them from biting each other. The company has already stopped this practice in Malaysia and Taiwan, with plans for the same in Thailand and other regions.

By 2028, it also wants to keep all pregnant sows in groups, in contrast to the current practice of segregating them into individual cages for the sake of efficiency. Intergovernmental agencies like the World Organisation for Animal Health frown on this, as pigs are highly social animals that can suffer from stress when separated from a group.

Thai food producer Betagro Group has said that by 2027 it would stop keeping pregnant sows in cages so small they can barely move.

Thai meat producers are also becoming more concerned about environmental, social and governance issues because of investor pressure. Indeed, global ESG investment surged 70% to $30.7 trillion in 2018 from four years before.

The U.K.-based Farm Animal Investment Risk and Return, a global network of investors that manage over $20 trillion in assets and oversees ESG investments in protein supply chains, rates 60 global livestock and fishery companies based on how they handle sustainability. In their 2019 ranking, CPF was 10th, the highest among Asian companies. Four companies in Asia -- CPF, China Mengniu Dairy, WH Group and Thai Union Group -- received were rated as "medium risk."

Asian food manufacturers stand to lose if they fail to meet animal welfare standards in the West. In July, coconut products made in Thailand were taken off the shelves of major supermarkets in the U.S. and Europe after an animal welfare organization criticized farmers for having monkeys harvest fruit.

In September, animal rights groups called for the boycott of Indonesia's Kopi Luwak coffee, which is produced from coffee beans partially digested by civets, claiming that the animals suffer in the production process. 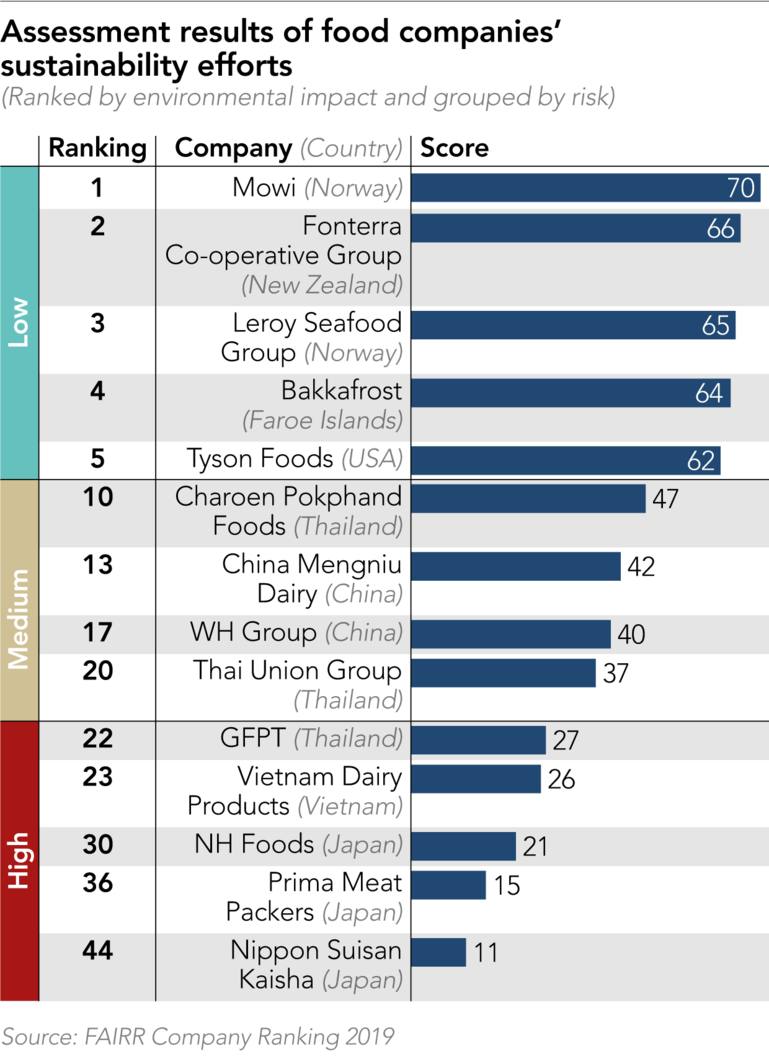