TOKYO -- Ramen, noodles served in a pork-based broth, although sometimes also made from fish, and originally from China, has long been popular with all age groups in Japan.

Nowadays, Western chefs fascinated by Japan's ramen, are creating their own variations on the theme. Once made, the new versions are increasingly being exported back to Japan, attracting many lovers of the noodle soup. 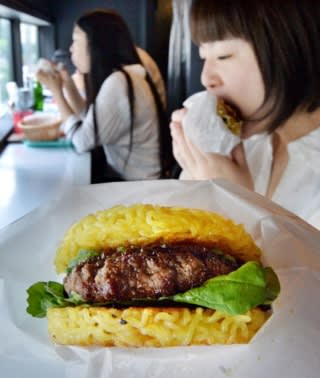 On May 3, Keizo Shimamoto, 37, opened Ramen Burger Tokyo, the first outlet of the Ramen Burger chain in the country. Its signature menu is The Original Burger, sold for 780 yen ($6.21). The menu is unique in that the buns are made from ramen noodles, not bread. The noodle buns create a texture new to the burger world and are stuffed with a patty made from certified 100% U.S. Angus Beef topped with salty-sweet soy sauce and gravy. The beef is famous for its excellent balance of marbled fat and red meat.

The establishment is busy serving office workers and university students from noon to night. In the evenings, many non-Japanese customers also call at the restaurant.

A 22-year-old woman from Yaita, Tochigi Prefecture, who visited the establishment in the afternoon on a weekday in late May, said she likes the seemingly unusual burger, because the noodles nicely loosen and fit into her mouth as she eats it. She said that she wanted to come back and eat it again.

The original Ramen Burger was first developed in 2013 by the Japanese-American chef after spending four years in Japan training with a ramen master. The burger made its debut at Smorgasburg, Brooklyn, New York City, in the summer of 2013. It became an instant sensation. Shimamoto now also operates another restaurant under the same name, in Los Angeles, California.

Shin-Yokohama Raumen Museum, the world's first food-themed amusement park opened in 1994 in Yokohama, Kanagawa Prefecture. It welcomed its first international restaurant owner in May. Luca Catalfamo, 38, from Italy, has just opened Casa Luca inside the museum. He first established his own ramen restaurant in 2013 in Milan, after trying out a variety of establishments specializing in the noodle dish in Japan.

The restaurant's specialty is "Milan Tonkotsu Ramen", a mixture of Japanese-style ramen of the same name and Italian cuisine, it sells for 900 yen. The menu is novel in that herbs grilled and marinated in olive oil are added to the soup, which is made of two kinds of soy sauce as well as Japanese-style broth. The grilled and marinated herbs add aroma and richness to the soup. The noodles are made from flour usually used for making pasta.

According to the store operator, the most popular dish at Casa Luca is garlic-flavored double chili noodles -- pepperoncino ramen -- with a good Italian flavor, it goes for 880 yen.

Both Ramen Burger and Casa Luca have a number of admirers in their respective home countries and are also enjoying a lot of customer attention in Japan. However, it will not be easy for them to keep Japanese customers, who are often particular about their ramen. Such restaurants from Hong Kong, the U.S. and Germany have entered the Japanese market only to make speedy exits. A female office worker from Yokohama, 35, said that although Casa Luca's ramen was delicious, it did not taste Italian in the way she had expected.

Yoji Iwaoka, head curator of the museum, said that the Japanese noodle market is constantly in search of novelty, but it would take longer for international ramen to become popular in Japan, as the locals are not yet used to the new flavors.