Foreigners are getting in on Japan's Airbnb boom TOKYO -- So many tourists are flooding into Japan that the hotel industry is having a tough time keeping up. For some of Japan's homeowners -- and even for some lease holders -- the situation spells o-p-p-o-r-t-u-n-i-t-y. 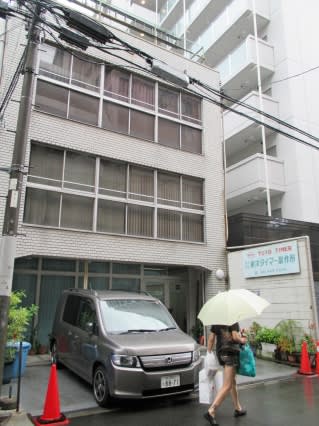 A condo next to Toyo Timer M.F.G. in Osaka's Chuo Ward has some minpaku activity.

For the government, it has presented a challenge. Old laws simply do not allow for today's minpaku, or home-sharing, trend and there is talk about updating relevant codes.

Critics, meanwhile, are saying, "Not so fast!" They fear the minpaku boom is driving up rents and home prices.

But minpaku seems to be here to stay, so neighbors and others are putting up with it.

"Again, here comes another," Hisao Kitamura said as he saw a foreigner coming through the door of Toyo Timer M.F.G., a factory in Osaka's Chuo Ward. Every week one or two groups of tourists inadvertently make their way into Kitamura's office, he said.

He started seeing foreigners carrying suitcases around the neighborhood last fall, after a condominium went up right next door. "Somebody is doing minpaku in this condo. That's why," Kitamura said as he walked up to the unbidden tourist to explain the situation.

Toyo Timer M.F.G. sits close to Kuromon Ichiba, a popular food market and major tourist destination that has become minpaku central. On a website that matches residents who have a spare room or even entire homes with travelers seeking sleeping space, the location of the condo that the confused guest is looking for is mistakenly shown to be where Kitamura's factory is.

The condo tower is meant for renters only. Residents, or lessees, who sublet to tourists or others are likely breaking Japanese law. Plus, most leases do not allow for the practice.

The condo complex's management company has admitted that units "were in fact used for minpaku." Currently, the company is checking how its residents are using their homes.

Chuo Ward is now the world's hottest minpaku area. It topped the ranking of the 16 Neighborhoods to Visit in 2016 by Airbnb, the U.S.-based "home sharing" platform. The neighborhood has Shinsaibashi, Dotonbori and other spots where tourists can take deep dives into Osaka.

No surprise, then, that the area plays host to throngs of foreigners. 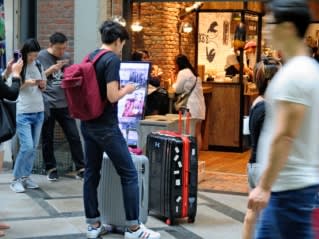 A tourist from Taiwan visited Osaka, Kyoto and Kobe while in Japan.

Finding foreign tourists who are making minpaku stays in Japan is not difficult. In just two tries on June 16, I found Lin Chinpin, a 25-year-old graduate school student, and his girlfriend, both from Taiwan, in front of a lobster roll restaurant in a Shinsaibashi arcade. During their seven-day stay in Japan, they used a minpaku room for three nights in Osaka. The room, which they booked on Airbnb, was a small flat that cost them only 6,000 yen ($57.50) a night, a third of what they paid for hotels in Kyoto and Kobe. "I'm a student," Lin said, "so the cheaper the better."

Japan now welcomes about 20 million tourists a year, and major cities like Tokyo and Osaka are running out of hotel rooms. There are worries that room rates could go up. But minpaku has provided a safety valve, at least if you are looking at the situation from the foreign arrival's point of view.

Still, Japan's Civil Code bars individuals from subleasing spare rooms without prior approval, and many rooms on minpaku websites are believed to be listed by unlicensed "hoteliers."

There are Chinese rivals to Airbnb, like Zizaike, which lists over 14,000 rooms in Japan. Many of the foreigners registered as owners of these flats are believed to be Chinese.

I decided to visit one and went to a condo in Shinjuku Ward, in central Tokyo, that is listed on a Chinese-run room-sharing website. I rang the buzzer and out stepped a young Japanese man. He seemed surprised but then quickly understood the purpose of my visit. He went on to explain that his Chinese roommate is doing minpaku but "is attending classes at university now."

After the visit, the Chinese man responded by phone and agreed to an interview. The man, 25, studies at a university in Tokyo. He shares the two-bedroom unit with two Japanese friends and "rents" out one of the bedrooms to tourists. The room is listed on Zizaike and Airbnb. Most of his guests are Chinese, he said.

The Chinese student said he has permission from the owner to sublet to tourists. When asked if this has any legal problems, he said: "Japanese people are [too] sensitive. [Minpaku] benefits both the lender and the user, so I think it's OK."

In fact, many rooms on minpaku matching websites are listed by renters. Some of the hosts say they have the owner's permission to Airbnb out their homes. But even these hosts may be breaking the rental contracts they have signed with property agencies. Many of these contracts do not allow for rooms to be sublet to third parties.

And then there are hosts who have neither the owners' permission nor the property agency's. These residents could "be kicked out of the place immediately if [minpaku] was found out," a Tokyo real estate agency said.

A 36-year-old Taiwanese man who works for a major Japanese company in Tokyo does minpaku on the side. Last year, he rented condos in Shinjuku and Akasaka. Shinjuku is popular among foreign tourists, so the Taiwanese businessperson's unit in the neighborhood has a 90% occupancy rate.

Although he says he has the owner's permission, he "understand[s] it is a gray legal area." But, he added, "you can't do this business if you follow the law." This month, he found four more units in Kyoto.

Is it OK to rent apartments, then list them on Airbnb and other sites? "Usually, no," an employee at a real estate agency near Shinsaibashi Station said. Few agencies would sign a contract if they knew the room would be used for minpaku, the employee said. "A suspicious customer," the worker added, "admits when asked if it's for minpaku." A panel put together by the government proposed to cap the maximum number of days a minpaku room can operate in a year.

Yet renting for minpaku purposes is becoming increasingly popular. A real estate agency in Osaka receives calls from agencies asking for empty units. The callers are willing to pay 200,000 yen or 300,000 yen a month, saying such rooms will find customers in no time if they are located in foreign tourist hot spots like Namba or Umeda.

Renters are not the only ones sharing their condos. "I think more and more foreigners are buying condos for minpaku," said Hirotomo Takahashi, who works for Youshin, an Osaka-based real estate broker. Last year, he sold a remodeled 30-year-old single-bedroom unit to a Filippina for 16 million yen. Later, he heard the room was listed on Airbnb. "She bought it for minpaku in the first place!" he thought.

Foreigners have been snatching up Japanese condos for awhile now, and their appetite shows no signs of diminishing. The buyers used to turn around and rent out their new homes. But these days, more owners are Airbnbing their properties, believing minpaku yields more than renting to long-term tenants.

In May, the head of a Tokyo-based real estate agency whose customers are mostly Chinese led an investor from Shanghai to a secondhand flat in central Tokyo. The investor liked that the place was an easy 10 minutes by foot from the nearest train station and bought the 15-year-old condo for 18 million yen. The buyer intends to get into the minpaku business, the agency head said.

Chinese investors like this one expect 10% yields (annual "rent" divided by purchase price). In Tokyo, owners of secondhand condos who rent to long-term leaseholders can expect yields of around 5% to 8%, according to the agency head.

On some online booking sites, it is becoming increasingly difficult to distinguish between an inn and a minpaku condo. The site Expedia allows users to choose from hotels, inns and apartment buildings. If a listed "apartment" has "no reception," it is a minpaku unit.

"For users, whether the place they stay is a hotel or minpaku room doesn't really matter," said Yasuo Hara, president of Ox Consulting, a minpaku agency in Tokyo. "Some travel booking sites list minpaku rooms and some minpaku sites list Japanese-style inns."

Hotels can also benefit from listing their rooms on minpaku sites to increase their occupancy rates, and minpaku operators can benefit, too, Hara added.

A traditional Japanese inn in Kyoto lists on China's Zizaike -- as well as on popular Japanese sites like Rakuten and Jalan. "They are all websites that can introduce us to travelers," the inn's manager said, "so [using a minpaku site] is not that different."

Japan's government hopes to boost the number of foreign arrivals to 40 million in 2020 -- maybe over 60 million. Tokyo hosts the Olympics that year, and everyone in the hospitality industry, even the minpaku player, is gearing up.