TOKYO -- June is considered to be the month of weddings, and Japan is no exception. But these days, a group of girlfriends in fancy dresses apparently heading to or coming back from a wedding has become a less common sight. The days of lavish weddings are gone. Couples are increasingly opting for simple weddings or no wedding at all -- one in two now merely submit a piece of paper.

But the shrinking Japanese wedding industry has found a savior. The number of foreign couples tying the knot in Japan has grown rapidly in recent years.

Earlier this month, one such couple from China was doing a wedding photo shoot in Karuizawa, a summer resort in Nagano Prefecture, northwest of Tokyo. "Shooting in Japan is popular now," one of them said, adding, "We chose Karuizawa because we like highlands, but Okinawa is more popular." A Taiwanese couple poses for wedding photos next to a shisa, or local sacred guardian, statue in Okinawa.

According to the prefectural government of Okinawa, Japan's southernmost island chain, one in ten couples who shot their wedding photos or held weddings in Okinawa are foreigners. The number of so-called resort weddings in Okinawa has grown in the last few years and set a record in 2015.

On June 4, a Taiwanese couple walked down the virgin road in a chapel set in front of an emerald green ocean in the Okinawa village of Onna. After the wedding, the happy couple went outside to take photos. It was a sweltering day and staff from Okinawa Watabe Wedding, the organizer, discreetly handed the couple a parasol and wet towels. "That was very heartwarming hospitality," the bride said. "I will tell my friends back in Taiwan that if they want to do weddings overseas, they should come to Okinawa," she said.

Foreign couples come to places all across Japan from Okinawa to Tomamu in the northernmost island of Hokkaido -- and to the heart of the country, too.

On June 8, a Hawaiian couple was posing for their wedding photos in traditional Japanese garments in front of a bamboo thicket at Roka Koshun-en park in Tokyo's Setagaya Ward. After that, they went to a famous intersection in Shibuya, a hip shopping district in central Tokyo, to take yet more photos. They chose Japan not only because they are fifth-generation Japanese Americans, but also because they think everything in Japan from the culture to food and services is wonderful. They carefully selected shooting locations with Decollte, a bridal photo organizer in Hyogo Prefecture, western Japan. 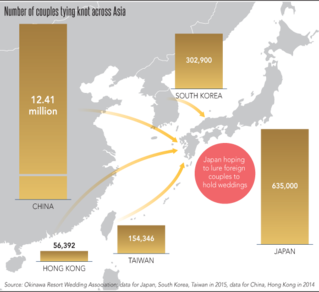 Cashing in on the trend, new services are popping up. Okinawa-based Value Bridge makes wedding videos featuring client couples as fictional main characters, making use of things like drones. "A man and a woman who once walked past each other in the ancient city of Kamakura had a fateful reunion in Okinawa. ... " so framed was one video. Many foreign couples like such theatrical and lovey-dovey direction that many Japanese would consider overtly explicit and embarrassing. One pair spent 1.5 million yen on their video.

In many cases, weddings are also part of their holiday travel, which means a big economic spillover. Okinawa Prefecture estimates the effect to be worth around 2.86 billion yen annually. In addition, those foreign couples help make the most of commercial wedding churches because "foreigners hold weddings or shoot their wedding photos regardless of the day of the week," an Okinawa Watabe Wedding official said. Most Japanese choose weekends, leaving the churches idle during the week.

The market for foreign couples has much room for growth. In China, for instance, some 12 million couples get married every year, about 20 times the number of Japanese marriages. Japan currently takes only 0.01% of that huge pie. "Foreign couples are promising players that underpin Japan's shrinking wedding industry," said Naoki Suzuki, head of Recruit Holdings' bridal research unit.