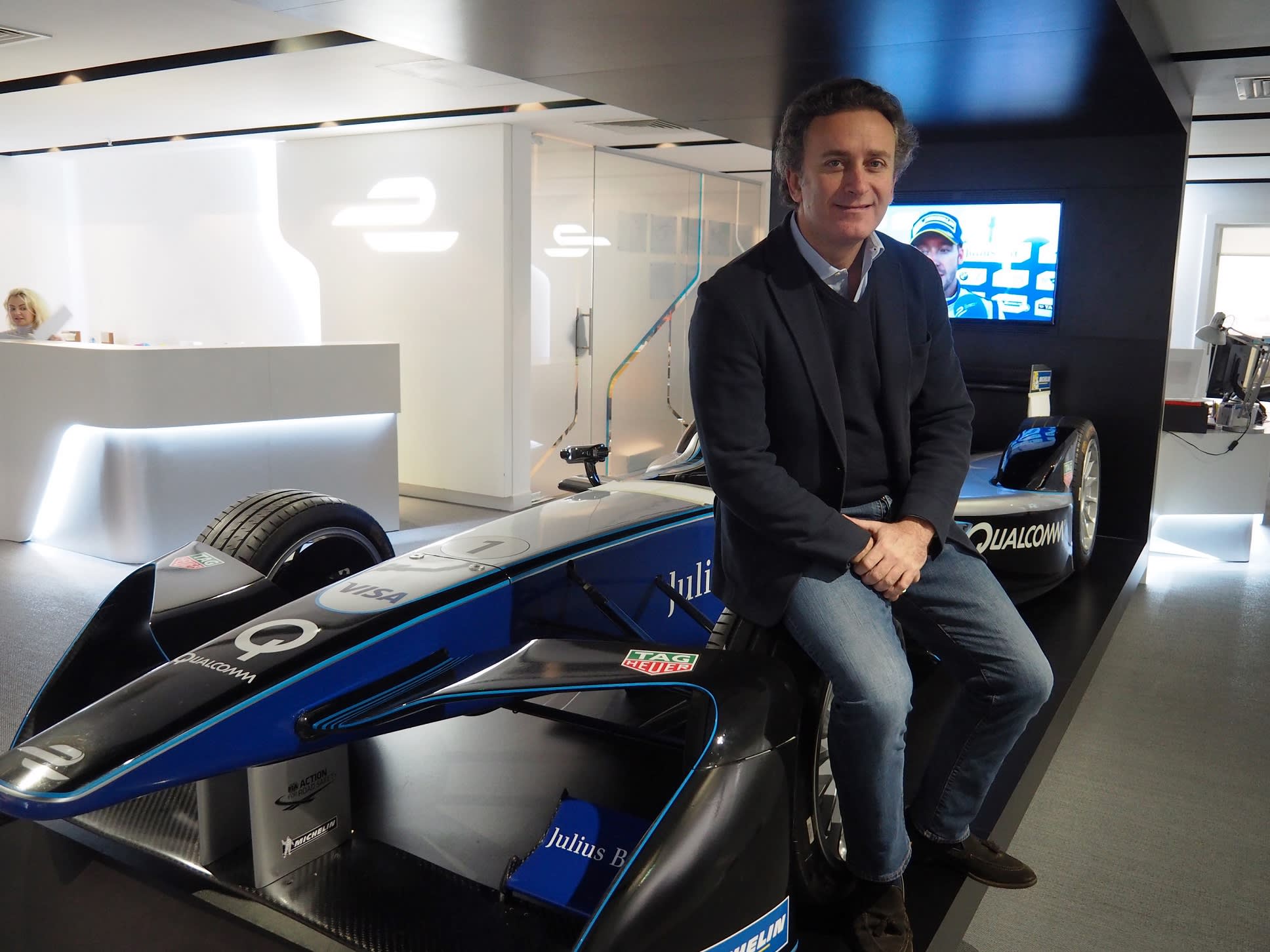 CEO says it's the wave of the future, but Japanese automakers have yet to roll

LONDON -- Nothing beats the adrenaline rush at the start of a Formula One race. Just ask any motor sports fan. The roaring engines and spinning tires create a deafening wall of sound that's hard to resist for its sheer power.

But Formula E is another animal altogether, a low-decibel, seemingly laid-back affair compared to its louder, grittier big brother. And it's definitely the volume factor that has endeared FE to cities like Beijing and Malaysia's Putrajaya, as the lack of ear-splitting sound means races can be held in city centers.

Some think electric races are the wave of the future, but others are skeptical.

Chief Executive Alejandro Agag sat down with the Nikkei Asian Review in his London office to talk about the idea behind Formula E and how it differs from traditional car racing.

Q: The first FE race was held in 2014. What was behind creation of this sport?

A: We felt there was something missing in motor sports, and we thought that the future of the automobile industry was going in a different direction from where motor sports was going. We felt it was a good opportunity to create a sport that is going to the same place as the industry, which is electric, connected and autonomous. The auto industry is now completely focused on electric.

Q: How is it different from conventional motor sports?

A: There are two main differences: One is that we are electric. Secondly, we race in the cities. The world is changing now, and the role of cities is going to be more and more important in the world of the future. More and more people are going to live in cities. Cities are going to grow, and will be the main influence when it comes to the happiness of people. If the city is a happy place, people will be happy. But for cities to be happy places, you need them to be clean, you need them to be efficient, and you need to have less traffic. The auto industry will have a big role, because whether a city is a good city or a bad city will depend on cars. With electric cars there is no pollution, less traffic and fewer accidents. So the positives of this electric evolution are huge.

Q: Are you competing with conventional motor sports?

A: No. I think we are completely different. I think we are complementary. But I also think that in 20 to 40 years, Formula E will be the main motor sport of the world, because the industry will be electric. Traditional combustion racing will become a traditional sport, like horse racing. We do not go to the office by horses, but horse races still exist. We will not be going to the office by a combustion car, but Formula 1 will still exist. Formula E will be the main motor sport because we will be the same cars that are in the street.

Q: You said that your races are held in city centers. How do you choose your venues?

A: We are in some of the most important cities of the world, because we want to bring the message of electric cars to as many people as possible. We want to be geographically diversified, and be in Europe, in America, in Asia, in Australia and in Africa. We go to cities which share our values; cities that are pushing the clean and green agenda, pursuing clean mobility, building new infrastructure for the city and for electric cars. We are joining forces with mayors who are really working to make their cities better and cleaner.

A: They are very different. There are cities and mayors who get it. If a mayor is really committed to the environment, we have a great relationship. If the mayor does not care about the environment, we do not. It is different from city to city. Some want less cars, some want more cars.

Q: Currently, there is no Formula E in Japan. Why?

A: Japan is not easy. The police are very strict. That is the only reason. Police are stricter than anywhere in the world. We have races in New York, China, Hong Kong, Paris, London...everywhere, but in Japan. The police are very, very strict because a race in the city streets has never happened before. When we did a road show in Japan, the police told us that we have to drive at 20 miles per hour. That is slow. But we will not give up. We want to race in Japan. It will take more time.

Q: Which countries are you hoping to race in?

A: The priorities are Japan, Brazil and Australia.

Q: Japanese automakers are currently not in on Formula E.

A: We speak a lot with Japanese automakers and they are, of course, welcome to join Formula E. I think they are watching. They are conservative and cautious. They want to make sure that Formula E makes for good competitions. I am optimistic that in the future we will get the Japanese on board.

Q: How is the business?

A: We have a business plan that is very solid. We are well on our way to break even very soon and to make a profit. The business model is basically divided into sponsorship revenue, corporate hospitality, ticketing revenue and television-rights revenues. Sponsorship is going especially well. Global corporations are committed to sustainability. Maybe at the end of this season, in 2017, we will be profitable.

Q: How fast are you growing?

A: Our revenue is growing maybe 50% per year. Half of that comes from sponsorships. The rest is from hospitality, television rights and fees from teams.

Q: What is your viewer base?

A: It was 20 million per race last year, of which seven to eight million watched live.

Q: What comes next?

A: Many things. Virtual reality has huge possibilities. With augmented reality you could watch the race as if you were the driver and experience it live. The technology is in progress, but I feel we are getting there. People say that it will be ready in a couple of years.