Foxconn, Apple and the partnership that changed the tech sector

The pair is basking in shared success -- and facing shared risks

PALO ALTO, U.S. For Apple, Hon Hai Precision Industry is not just a subcontractor. It is a business partner. And though both sides are taking steps to reduce their mutual dependence, their fortunes remain very much entwined.

Their ties deepened in 2000, when Foxconn Technology Group -- as Hon Hai is known -- landed an order to produce Apple's iMacs. The duo had worked together on parts production before, but this was a major turning point. Apple's high quality standards forced the Taiwanese supplier to sharpen its technological edge.

When it came to the iPhone, Foxconn not only handled production and met tight deadlines but also played a crucial role in realizing Apple's aesthetic vision. The contract manufacturer was able to seamlessly combine aluminum parts with frictional heat, and used a technique called anodization to process the surface of the metal. It is no exaggeration to say the success of the iPhone depended on Foxconn, and Foxconn's growth hinged on the iPhone.

Along the way, Apple has invested in machine tools otherwise used to make luxury cars and rockets, furthering Foxconn's development. Apple manages inventories of core parts at Foxconn's warehouses in real time, and Apple employees are on hand at the supplier's factories at all times. In some ways, the companies have practically integrated their operations.

Their lock-step approach extends beyond the factory, too. Foxconn, along with its Japanese unit Sharp, joined Apple in investing in SoftBank Group's $93 billion tech fund. Foxconn Chairman Terry Gou brought Apple on board with his bid to acquire Toshiba's memory chip business. And Foxconn's plans to produce liquid-crystal displays in the U.S. could help Apple CEO Tim Cook answer the job-creation demands of the Donald Trump administration. 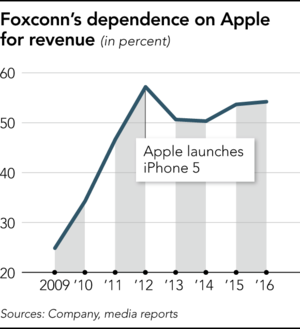 MY PROBLEM IS YOUR PROBLEM Just as they share success and opportunities, the two companies face some of the same risks.

Apple, for instance, found itself doing damage control after a string of suicides by Foxconn employees in China. Critics held the U.S. company responsible for allegedly harsh working conditions at its supplier.

In June 2010, when Cook was still chief operating officer, he rushed to meet with Gou in Shenzhen, bringing two risk-management experts in tow. Apple conducted a monthlong probe to get a handle on the situation, and Cook has since inspected Foxconn factories himself on another two occasions: in 2012, shortly after the death of Apple founder Steve Jobs, and again in 2014.

Apple has also taken action to stave off criticism from environmentalists. It set policies on buying renewable energy and avoiding hazardous materials in manufacturing, and Foxconn has put them into practice.

As close as the two companies have become, Apple is careful to set boundaries.

"Apple completes prototypes near its head office [in Cupertino, California], and never lets this process outside California," said an employee of a parts supplier with access to Apple's design unit. Apple is not about to let Foxconn in on its product development secrets.

The inscription on Apple's products reflects its determination to stay atop the food chain: "Designed by Apple in California. Assembled in China."

Apple's expansion into India, meanwhile, has the potential to weaken its bonds with Foxconn. The U.S. giant is proceeding with local production in the South Asian country, to get around tariffs on imported products. Wistron, another Taiwanese contract manufacturer, will assemble the iPhone SE at a factory in Bangalore. If Wistron proves itself in India -- which looks primed to become a huge market on a par with China -- Foxconn might start to seem replaceable.

Foxconn, for its part, is forging closer ties with Apple's Chinese rivals, such as Oppo and Huawei Technologies. Generally, Apple still gets first dibs on the most advanced parts, but the wait times for Chinese players are getting shorter, down to several months.

The result is a market inundated with smartphones that look similar and offer many of the same functions. One could argue the very existence of Foxconn is a risk to Apple, since it is turning smartphones into standardized commodities. Apple relies on its smartphones for more than 60% of its sales.

This is why Apple is stepping up in-house chip design -- to enhance its ability to protect its intellectual property and differentiate its products from those of competitors. In turn, Foxconn is still keen to acquire Toshiba's chip business, recognizing that if it fails to keep evolving with Apple, it will wind up receiving orders with less added value. Just as SoftBank acquired U.K. chip designer ARM Holdings, which supplies chip architecture to Apple, buying the Toshiba memory operations could also give Foxconn new avenues for expansion.

For now, staying in Apple's orbit is a priority for Foxconn, which has concentrated on the U.S. client and other major smartphone makers while doing little business with smaller ventures in Silicon Valley and Shenzhen. Another challenge, eventually, will be finding a successor for the 66-year-old Gou.

At Apple, the transition from Jobs to Cook began in January 2011, when Jobs took medical leave and asked his then-COO to handle the day-to-day responsibilities. Jobs formally stepped down that August, before his death in October.

Some critics say the post-Jobs Apple has put out few innovative products, but the numbers show Cook has performed well. So for an example of a successful succession, Foxconn need look no further than its customer-turned-partner.