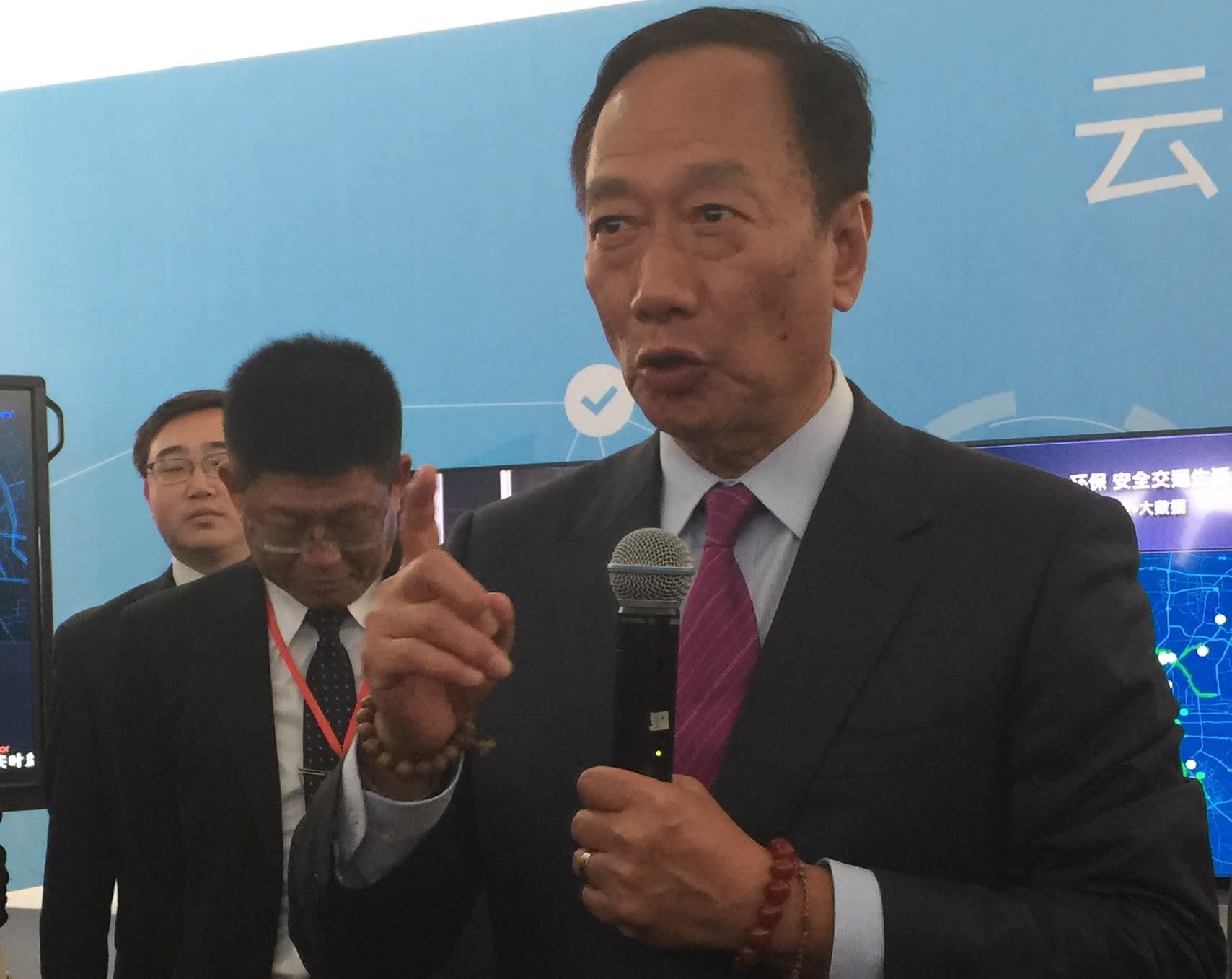 The sources did not disclose details of the first-ever encounter between the two. But with Trump's persistent pledge to bring manufacturing jobs back to the U.S., and Gou's dogged determination to acquire the memory chip business of embattled Japanese conglomerate Toshiba, the two will likely exchange their views on related issues.

A Foxconn spokesman did not immediately respond to a request seeking comment.

One source said Gou was able to secure the meeting with Trump with help from his friend SoftBank Group Chairman Masayoshi Son, who met Trump in New York in December.

The source added that when Gou visited Washington in late February, the Taiwanese tycoon met Trump's son-in-law Jared Kushner, although it is unclear what the two discussed.

Industry sources have said that Washington is involved with and being consulted on Toshiba's plans to sell its semiconductor unit and Westinghouse Electric, its American nuclear unit which owns military-grade reactor technology, as the fate of both businesses has implications for U.S. national security.

The Obama administration last year blocked the sale of an American unit of German semiconductor equipment supplier Aixtron to a Chinese company, citing national security concerns. Aixtron devices are used to produce chips that can be used in weapons systems.

People familiar with Foxconn have told the Nikkei Asian Review that the Taiwanese manufacturer, with substantial operations in China that employ close to 1 million people, is unlikely to become the new owner of Toshiba's memory business due to its Chinese-linked background.

Trump has repeatedly criticized Apple and its suppliers for outsourcing manufacturing to Asia and elsewhere, and threatened to impose stiff tariffs on Chinese imports. Foxconn relies on Apple for more than 50% of its revenue.

In response, Gou said this January that Foxconn is considering building a highly automated TV panel facility in America.

Yet in March, he broke ground on a similar facility in the southern Chinese city of Guangzhou first and criticized the U.S. government's inefficiency in dealing with investment interests. The Washington Post reported in early March that Foxconn never went through with a promise in 2013 to invest $30 million and hire 500 workers for a new factory in central Pennsylvania.

The 66-year-old Gou oversees the largest contract electronics maker in the world. Beyond assembling iPhones, Foxconn also makes e-readers for Amazon.com, personal computers and servers for HP, humanoid robots for SoftBank, game consoles for Sony, and smartphones for major Chinese brands including Huawei and Xiaomi.

Foxconn's profitability comes mainly from its ability to slash its costs, thanks to the growing use of automation, government subsidies, and relatively cheap labor in China.

The electronics mammoth attracted notoriety in 2010 for a string of suicides at facilities in southern China. Labor rights groups accused the company of abusing front-line workers with militaristic management and forced overtime.

Manufacturing in the U.S. would certainly mean higher costs and more problems for a company already grappling with razor-thin margins from making products for others.

Sales dropped 2.81% on the year to 4.35 trillion New Taiwan dollars ($144 billion) for 2016, down for the first time since Foxconn went public in 1991, as iPhone demand faltered and global smartphone market hit a plateau.

But cost controls helped the bottom line. Net profit rose 1.2% to NT$148.66 billion. The operating margin came to 7%, and the net margin 3.4%. In stark contrast, Apple's operating margin consistently tops 25%, even though many market watchers suggest that the U.S. tech titan and Foxconn are now dependent on each other.

Gou is painfully aware of the protracted struggle he faces and the lack of a new growth driver for his manufacturing empire.

He spent a long time trying to branch out into other business, including funding various startups and running retail stores. He even created his own electronics brand, bizarrely named InFocus. But none of these has come to deliver any significant profits.

But Gou took a dramatic turn last year, showing his resolve to transform his contract manufacturing company into a brand business.

He reached an agreement with troubled Japanese electronics conglomerate Sharp last April to acquire the Osaka-based company for its advanced display technology and brand.

The month after, Foxconn agreed to acquire Nokia's feature phone business from Microsoft. Now Foxconn is also making Nokia brand smartphones for Finland-based HMD Global, which has licensed the Nokia brand for 10 years.

Before its new Sharp and Nokia ventures have yielded any notable benefits, Gou is now eyeing Toshiba's memory unit in hopes of establishing a foothold in the semiconductor sector, an area where Foxconn has virtually no previous expertise.

Foxconn is now vying with Western Digital, Broadcom and SK Hynix for Toshiba Memory. The government-backed Innovation Network Corp. of Japan is likely to form an alliance with an American bidder.