TAIPEI -- Hon Hai Precision Industry, the world's largest electronics contract manufacturer, said on Wednesday that it was focusing on robotics technology to help turn around the embattled Japanese conglomerate Sharp Corporation and to boost the sales of Sharp products in China.

"We are talking with Sharp about how to turn both companies' robotics technology into new consumer electronics products and we believe this is a key future direction for both companies," said Tai Jeng-wu, a Hon Hai vice president who is expected to become Sharp's new chairman following the Taiwanese company's $3.5 billion takeover of the Japanese electronics giant.

Hon Hai, better known as Foxconn, has been working with Japanese tech titan SoftBank to produce a robot named "Pepper." Separately, Sharp unveiled RoBoHoN, a smartphone that looks like a robot that can interact with users, earlier this month. 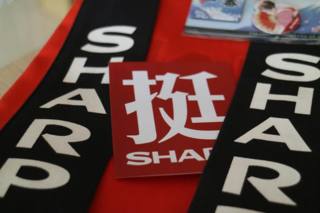 Tai made the remarks on Wednesday at an internal company event in Taipei to sell Sharp electronics including dehumidifiers, air purifiers, and cookers to employees.

Besides developing technologies together, Tai said Foxconn will directly support Sharp's sales by setting up more than 30 stores in the Taiwanese company's campuses -- where its workers live -- in 18 Chinese provinces.

"We are opening flagship shops for Sharp products first to serve some 1 million employees in China and then we want to use those as a basis to help sell Sharp products to Chinese consumers," Tai said.

Foxconn will hold a regional sales meeting at its Longhua facility in the southern Chinese city of Shenzhen in early May to discuss how to bolster the Japanese electronic brand's foothold in China, Taiwan, Hong Kong, Southeast Asia and India, according to Tai.