Chairman Terry Gou 'won't choose' between US, China, but his investments lean east 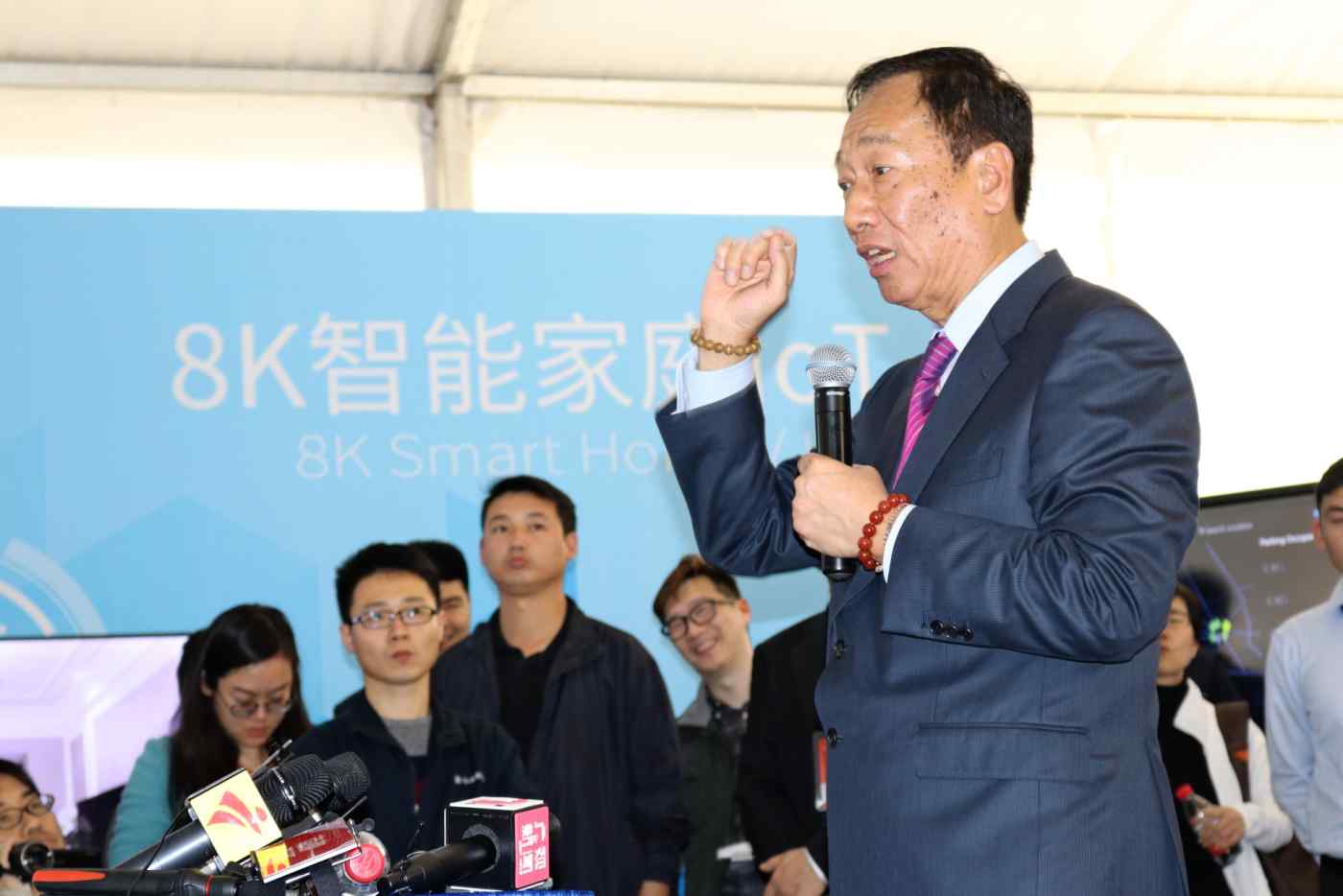 GUANGZHOUHon Hai Precision Industry recently broke ground on a massive new panel production facility in southern China. But while the Taiwanese company is keeping its regional expansion on track, Chairman Terry Gou has hinted that its plans to invest in the U.S. may not materialize anytime soon, due to labor issues and a lack of incentives.

"We want to link Shenzhen, Guangzhou, and Pearl River Delta, the largest regional economies in China, with our 27 years of experience in Shenzhen," Gou said on March 1. "We are bringing the best technology in the world here. ... We are bringing the complete supply chain here."

The Taiwanese tycoon was speaking at an event marking the start of construction on a $8.87 billion advanced display industrial park in the Zengcheng district of Guangzhou.

The project, first announced at the end of 2016, is a collaboration between Gou-controlled Japanese panel maker Sakai Display Products and the Guangzhou government, though the two parties have not disclosed their respective contributions. It is the largest investment in the southern Chinese city since the country opened the door to foreign investment in 1978, according to local officials.

Gou said he is bringing some 100 suppliers to invest in the park to build a comprehensive display production ecosystem that could eventually create as many as 15,000 engineering jobs.

The new Zengcheng campus will house a facility for churning out advanced 10.5-generation panels for use in high-resolution 8K screens, with construction expected to be completed in 2019. These 10.5-generation panels are 2.94 meters by 3.37 meters in size and are typically used to make large-screen TVs of more than 40 inches.

According to Gou, two major U.S. companies, Corning and Cisco, will also invest in the new tech park. He said Corning and Foxconn will invest jointly in a facility to make "mother glass," the substrate used for making 10.5-generation panels, while Cisco will create a research and production center. Gou did not divulge investment figures.

Cisco did not immediately respond to an email request for comment, while Corning has only said in a statement that it is committed to meeting customers' demand and supporting their growth.

John Zhang, general manager of Corning's display technology business, attended the groundbreaking event in Zengcheng. Also present was a senior executive from Germany's Merck, a display material supplier, and Chairman Makoto Kimura of Nikon, the only company in the world that makes exposure equipment for 10.5-generation panel facilities.

GOOD TURNOUT, BAD IDEA? Top provincial official Hu Chunhua, the party secretary in Guangdong and a protege of former Chinese President Hu Jintao, made an appearance as well. Gou revealed that he and Hu have been friends since the late-2000s, when the latter was governor of Hebei Province.

But despite the auspicious start for the new park, there are concerns that investing in large panels is not a wise move.

Hsieh said Foxconn will be fighting an uphill battle in the large TV market in China.

History has shown that demand for large panels, which depends on trends in the overall TV market, can shift rapidly. Competitive investment in production by such makers as South Korea's LG Display and Taiwan's AU Optronics led to oversupply and sent key players into the red around 2011 and 2012. Japan's Sharp was driven into a financial crisis by the downturn. Demand for TVs in China led a resurgence in 2013 and 2014, though the ensuing economic slowdown there saw the panel market slacken once again.

Since the latter half of last year, both demand and prices have recovered, particularly at the larger end of the spectrum. But the current boom may prove tough to sustain.

"There will be the issue of oversupply, so the key factor to Foxconn's success is whether it can manage to sell all its large panels via [Foxconn-controlled] Sharp. Otherwise, if they still need to sell extra panels to other brands, that would create extra competition for themselves," Hsieh said.

Gou brushed aside supply glut concerns, saying his company will compete -- and eventually triumph -- on quality.

In addition to the Zengcheng facility, Foxconn's current China expansion efforts include plans to recruit some 12,000 college graduates in the country in 2017, an apparent attempt to groom more locals for middle management.

CAUGHT BETWEEN Foxconn is a key assembler for Apple. Its move to expand its China operations comes amid mounting trade tensions between Washington and Beijing, with U.S. President Donald Trump accusing the Asian powerhouse of stealing American jobs and engaging in currency manipulation.

Trump has also frequently targeted Apple, which accounts for over 50% of Foxconn's total revenue, in his attacks on American companies he says have caused domestic job losses by outsourcing manufacturing abroad. Trump has vowed to push the tech titan to make iPhones and other of its devices at home.

Responding to Trump's protectionist approach, Gou said in January that he was considering building a "highly automated" facility to make large panels in the U.S., as well as a molding factory in Philadelphia, Pennsylvania.

At the Zengcheng event, Gou told reporters he had just returned from a short trip to Washington, but declined to say whether he had met anyone in the Trump administration.

He raised uncertainties over plans to manufacture in the U.S., saying he was not sure whether American officials can move fast enough to attract foreign investors.

"I am concerned as to whether the U.S. can resolve all the investment issues in only a few months' time," Gou said, adding America also lacks the skilled labor and comprehensive supply chain the display industry requires.

"Does the U.S. offer incentive programs for foreign investors? They'll need to pass bills first, and we'll need to wait for American authorities to make a decision first," Gou said.

But Gou still tried to strike a balance. "No one is willing to see a trade war happen," he said. "I am not willing to choose between [the U.S. and China]. Why should I give up on any market?"

"It is in the interest of the entire humanity that China and the U.S., the top two economies in the world, can get along peacefully," Gou said. "They are in the process of gambling with each other, and I can foresee that the two will eventually work together to grow [their] economies and deliver beneficial outcome for many. If they don't, then everyone will be losers."