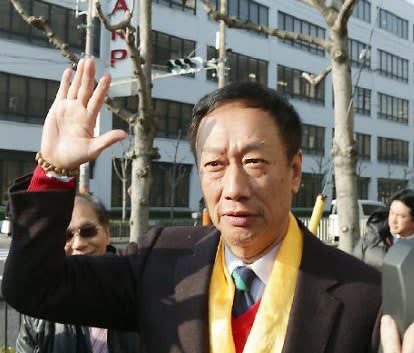 TAIPEI -- At a Feb. 25 extraordinary board meeting, the troubled Japanese electronics giant Sharp decided to accept an acquisition offer by Taiwan's Hon Hai Precision Industry, known as Foxconn. Foxconn Chairman Terry Gou, who built the huge electronic manufacturing services company, has shown a strong interest in acquiring Sharp, even by spending a whopping 700 billion yen (6.11 billion). Tomohiro Otsuki, president of Techno Market Research, a Taipei research and consulting firm, has followed the movement of Foxconn for nearly 10 years, since his time as a reporter, and has interviewed Gou many times, explained Foxconn's deeply considered aims in the acquisition in Q&A format.

A: Foxconn can use Gou's personal assets and will also be able to initiate a realignment of the industry.

I do not have details of Foxconn's offer to Sharp. The Japanese company's market capitalization is reported to be less than 300 billion yen, so I think the 700 billion yen offer would be amazing if true. However, the method of calculating a company's value differs depending on whether the purchaser is an individual or a corporation, and it is certainly quite different for financial and nonfinancial companies. In addition, Foxconn can use Gou's personal assets.

Gou, who has built Foxconn into a 15 trillion yen enterprise, is a man of enormous wealth. His personal assets amount to $5.6 billion, according to Forbes magazine, and this would be enough for him to purchase Sharp in a takeover bid.

Money is not the real issue for Gou. He plans to bequeath some of his assets to welfare projects after he passes away, so he can use as much as he likes. And since most of his assets are shares in Foxconn group companies, he can use them as security to take out massive loans.

Display panels are a high-risk business. If Foxconn invests a huge amount of money, its stock price and Gou's personal wealth may decline. So Gou has invested a total 400 billion yen (as of 2014) of his own money in Taiwan's Innolux, China's Century Display (Shenzhen), Japan's Sakai Display Products and other liquid crystal display panel makers. He could also have Sharp spin off its LCD panel operation and put his own funds into the new company.

In recent years, strong rivals have emerged in China in small and midsize displays for use in smartphones and tablets. The Chinese companies pose a threat because they are supported by state capitalism, or "foul play in capitalism." They can finance enormous capital investments using the government's virtually inexhaustible investment and lending resources. Chinese panel makers' business objectives are recovering variable costs and creating employment.

It has, therefore, become necessary for Foxconn to prevent the creation of a "bipolar structure" consisting of leading South Korean manufacturers, such as Samsung Display and LG Display, and Chinese manufacturers backed by the state.

Gou's plan for preventing this is to integrate major Taiwanese LCD panel maker AU Optronics, Foxconn-affiliated Innolux, and Sharp's small and midsize display business. AUO Chairman K. Y. Lee, who strongly opposed the plan, left the company's board in 2015 due to illness, and the new chairman, Paul Peng, has not denied the possibility of the integration.

I am unsure whether the Japan-Taiwan corporate integration will be realized. But Gou can initiate a move to reorganize the industry, and Foxconn can promote recovery of fixed costs for display panels by its immense parts and materials buying power in EMS. Therefore, even if the company's funds are used, he can set a higher acquisition price than financial companies can.

A: Because it will strengthen its "equation of victory."

Sharp is strong in innovation -- it was instrumental in bringing mobile phones with cameras into wide use, not to mention LCD televisions. However, even with its breakthrough innovations, its sustaining power is weak, and it has a bad habit of being beaten by latecomers. This is why the company has been unable to maintain high-risk businesses, such as in LCD panels, and has been brought to the brink of collapse.

For Foxconn, Sharp's innovation is attractive because it would greatly contribute to raising its skills in the planning, design and sales of electronic devices.

In fact, Foxconn has virtually given up making a profit in its traditional EMS/ODM (original design manufacturing) businesses, that is, in the assembly of finished products. It is outstripping its rivals and making profits by being entrusted with more processes, including design, manufacturing and after-sales services, and with the procurement of more parts and materials, for good customers' strong products.

That is, acquiring Sharp's electronic device division to enhance planning, design and sales would enable the company to increase "windows" in development processes when winning customers. It would also enable it to find more opportunities for selecting parts and materials, making it easier to earn profits. This strengthens Foxconn's "equation of victory." For Sharp employees involved in product planning and basic design, this means they will have opportunities to truly compete. Of course, Foxconn is not an "indulgent company." Employees work long hours and many of them soon quit. However, the company rewards employees who achieve remarkable results.

It is uncertain whether the Sharp brand can survive under the Foxconn umbrella. The brand could be used in fields that do not directly compete with Foxconn's corporate clients, such as Apple and HP, but would be difficult to use in fields that do compete. In the future, the brand name itself could be sold.

Q: Which products do you expect synergy from in the short term?

A: White goods and camera modules.

Taiwanese EMS/ODM companies, including Foxconn, have not been strong the white goods business. This was partly because they grew up in the personal computer industry, but the main reason is that demand for appliances is lower than for "black" goods, such as audiovisual equipment. As a result, Taiwan has insufficient human resources in the white goods field, although the arrival of the IoT (Internet of Things) age could change that.

Therefore, Foxconn and Sharp could have great synergy. There is a precedent for this. Turkey's Arcelik has become the largest air-conditioner maker in Europe and the Middle East through a joint venture with South Korea's LG Electronics. Sharp posted sales of about 16 billion yen for fiscal 2015 in refrigerators and air conditioners alone. By providing business resources to different brand companies, Foxconn will be able to cultivate new markets.

Synergy can also be expected in the short term for the camera module business. Sharp will post sales of about 40 billion yen in the segment, mainly on sales to Apple, for fiscal 2015. These are supported by mass-production technology, which realizes a high product yield, and a geographical advantage. Apple procures image sensors from Sony and lenses from Kantatsu.

Foxconn, meanwhile, has tried to expand its camera module operations, including lens production in Jincheng in China's Shanxi Province, for more than five years, but has produced few results. If Sharp's strength in modules is integrated with Foxconn's assembly operations, the lead times for design and mass production will be shortened. This would surely attract customers.

Finally, I would like to add that Gou also has a superlong-term aim. He commented to the Taiwanese media on Feb. 19, "Sharp is more than 100 years old and is now faced with difficulties. Foxconn turns 42 this year, and has many tasks ahead of it. It is uncertain if the company will make it to 100, but if it ties up with Sharp, it will be able to review itself by learning about the problems the 100-year-old firm has. This is one of the reasons for acquiring Sharp."