AUO’s Chairman Paul Peng said there would be some price correction in the panel market in the second half of 2017. (Photo by Cheng Ting-Fang)
CHENG TING-FANG, Nikkei staff writerJuly 26, 2017 23:51 JST | Taiwan
CopyCopied

TAIPEI -- Major Taiwanese panel maker Innolux, a subsidiary of Hon Hai Precision Industry, also known as Foxconn Technology Group, said on Wednesday it aimed to expand its television assembly business amid concerns about the falling price of panels and a likely supply glut ahead.

"The year of 2017 would be our first year of TV-assembling and that would be our long-term strategy to grow this business," said Innolux's President and Chief Operating Officer Robert Shiao Chih-Hung during an earnings briefing.

"Besides our key panel manufacturing business, we managed to assemble some 100,000 televisions a month this year, and will increase our capacity to make some 500,000 units per month beginning 2018," said Shiao, adding that sister company Sharp would be its first major customer and that cooperation with other TV brands was likely.

There is a growing trend that in order to have a successful display business a company also needs to have a powerful in-house brand to sell those products, according to Eric Chiou, an analyst at Taipei-based research firm WitsView.

"That's what Samsung Electronics, LG Display, China's BOE Technology Group, and TCL are all doing," said Chiou. "If more integration is an industry trend, Innolux would benefit from that. But on the other hand it will be a bit challenging for some other independent panel makers looking ahead."

However, Innolux and its Taiwanese panel peer AU Optronics are both facing falling prices of large panels and a potential supply glut in the second half of 2017.

Innolux's Shiao said his company expected panel prices for televisions and monitors to fall into the low single digits in the current quarter, with demand from China still uncertain after a weak first half.

AUO Chairman Paul Peng admitted during an earnings call on Wednesday that there was some price correction going on in the panel market after several quarters of rises.

"We will not be too pessimistic about the TV market in the second half... and we do think some correction in price would eventually boost demand in the traditionally robust July-September period and propel discounts in the end-device market," said Peng.

Both Taiwanese companies count on panels for TVs for around half of their revenues, while smaller displays for handsets, automobiles and other consumer electronics only account for some 20% of their overall sales.

WitsView's Chiou said mid-to-large size panel prices across applications for notebooks, monitors and TVs had all been softening since the last quarter, and would continue to fall through the end of this year. "We are also a bit conservative about the TV panel price even in the first half of 2018, and we tend to be more careful as there will be quite a lot of extra industry output for TV panels coming next year," said Chiou.

In a longer term, both Taiwanese panel makers' handset panel businesses will likely take a hit from the shifting industry trend to use more organic light-emitting diode (OLED) screens in midrange to high-end smartphones, especially when Apple's premium iPhone takes up such technology later this year, according to Annabelle Hsu, an analyst at research company IDC.

Innolux and AUO do not supply the quality of OLED screens used in smartphones. Samsung Electronics still dominates this segment. 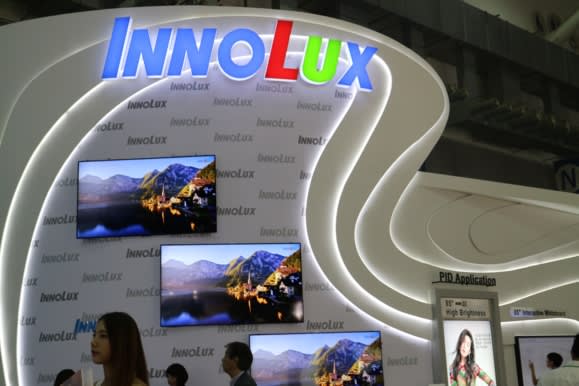 For the three months ended in June, Innolux and AUO booked net profit of 12.11 billion New Taiwan dollars ($398.6million) and NT$9.83 billion, respectively, compared with quarterly losses in the year-ago period, thanks to the rebounding panel price since the July-September quarter in 2016. Innolux's revenue increased 26.5% from a year ago to NT$84.5 billion while that of AUO advanced more than 5% year-on-year to NT$84.41 billion.

Separately, Taiwan's United Microelectronics (UMC), the world's third largest contract chipmaker, on Wednesday said it would revise down its capital expenditure for 2017 to $1.7 billion, from $2 billion previously, due to softened market demand.

The company also forecast a weaker-than-expected July-September period with flat revenue of around NT$37.53 billion, little changed from the previous quarter but down 1.6% from a year ago, and a lower gross margin of 14% to 16%.

Jason Wang, co-chief executive of UMC, said heavy reliance on certain big customers for its 28-nanometer chip process technology had led to higher vulnerability to changes in demand. UMC's 28nm chip technology was previously viewed as one of the most important growth drivers for the Taiwanese company.

UMC's big customers for 28nm chips include mobile chip providers such as Qualcomm and MediaTek. But Qualcomm has shifted some orders to more advanced chip process technologies provided by Samsung, while MediaTek has suffered from slowing demand this year and loss of market share from Chinese smartphone makers.

For the April-June period, UMC's net profit was NT$2.09 billion, down nearly 19% year-on-year, while its gross margin of 18% was also substantially lower from 22.4% a year ago.