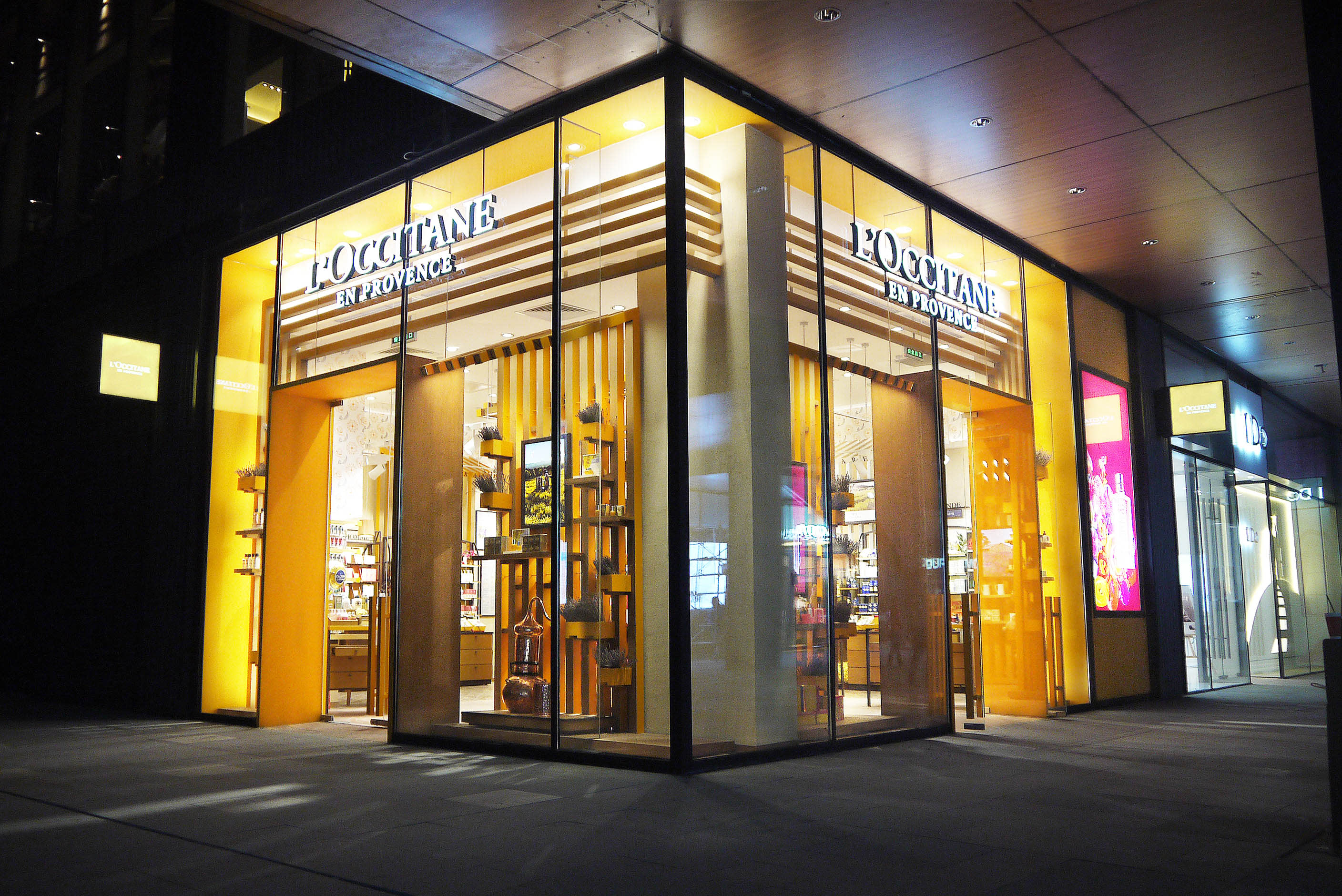 HONG KONG The tranquil towns of Provence in the south of France, depicted in Vincent Van Gogh's paintings surrounded by almond blossoms, might seem a far cry from the hustle and bustle of Asian capitals, with their digital-savvy residents. But distance and the change of scene are minor hurdles for L'Occitane, the premium French beauty brand, which is gearing up for growth in the region with a digital drive.

In mid-September, L'Occitane is turning its flagship store in Tokyo's commercial hub of Shinjuku into what it calls its first digital store, which fuses digital and physical shopping spaces. 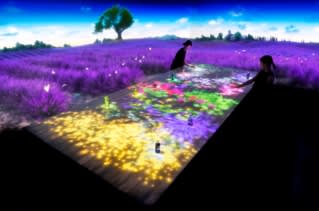 The Digital Provence Theater, produced by teamLab, is to appear in L'Occitane's store in Shinjuku, Tokyo, in September. (Photo courtesy of L'Occitane)

An interactive "flower table" will feature the kind of natural ingredients L'Occitane uses in its products. In a digital theater, customers will be able to take a virtual walk into purple lavender fields under the Mediterranean sun and end their shopping trip by tasting a delicacy of the French south -- blueberry-lavender creme brulee, or burnt cream in a cone. 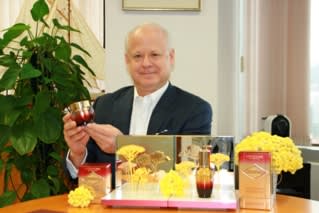 "We want to bring nature to downtown Shinjuku," Andre Hoffmann, L'Occitane's vice chairman and managing director for Asia-Pacific, told the Nikkei Asian Review. "We feel this will be kind of a showstopper that will bring people into the store."

The digital store is just one of L'Occitane's latest moves to boost sales in Japan, its largest market in Asia by net sales. The 40-year-old brick-and-mortar retailer has a more ambitious target to meet -- more than doubling its e-commerce sales to a quarter of its global sales by 2020, up from around 10% today.

The French company sells more hand creams and shower gels in the Far East than at home. Even though it is still based in France, its shares are only traded in Hong Kong, and Asia contributes to about half of its turnover while Europe, North America and emerging economies like Brazil and Russia account for the rest. This is unlike rivals such as Origins, by U.S. cosmetics group Estee Lauder, and L'Oreal's Body Shop, which have a less concentrated geographic presence. L'Occitane generates about half of its revenue in Asia, including Hong Kong where it lists its shares. The outlet in Festival Walk, a mall in Kowloon Tong. (Photo by Jennifer Lo)

L'Occitane's e-commerce push comes at a time when the global retail industry is at an inflection point. Traditional markets like Europe are losing steam. Deep-pocketed Chinese mainlanders are tightening their belts. A new breed of customers in Asia are doing their shopping with just a few clicks on their smartphones, whether it is on the train or in the bathtub.

The group's net profit for the year ended in March fell 9.6% to 113.6 million euros ($128 million) compared with a year earlier, despite a modest rise in turnover. But quarterly sales from April to June softened by 2.2% to 268 million euros, dragged lower by foreign exchange losses and uncertainty over the global economy.

HEALTHY E-COMMERCE GLOW Still, a localized e-commerce strategy has been an engine for growth. L'Occitane is tapping into Asia's messaging apps such as Line, a unit of South Korean internet group Naver, to reach out to customers and promote its products in Japan. It is ranked one of the top gifting brands on chat app KakaoTalk, which alongside L'Occitane's own official site and third-party platforms, accounts for 25% of its sales in South Korea. In other developed markets like the U.S. and the U.K., about 20% of the group's retail sales come from e-commerce, primarily through direct sales on its website. That figure falls to about 10% in Japan and mainland China. However, overall global sales on L'Occitane's branded e-commerce channels rose by about 15% last year, overtaking the sales growth in physical stores.

In December 2014, the group began a partnership with China's Tmall, an online platform for branded goods operated by Alibaba Group Holding, to penetrate areas without any dedicated L'Occitane shops. It is planning more exclusive launches on Tmall and will start selling directly on WeChat, China's hugely popular messaging app developed by Tencent Holdings, later this year. 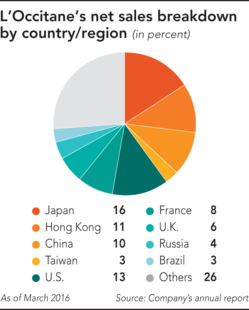 Many have sounded the death knell for physical stores in the era of digital e-commerce, but L'Occitane is unconvinced. Existing store renovation and new openings still play a part in building brand awareness. The group has 195 physical stores in 75 cities across China excluding Hong Kong, but plans to add more. This was despite shop closures by Western peers like Louis Vuitton and Gucci as China's wider economic downturn and the anti-corruption drive led by President Xi Jinping stifled consumption. 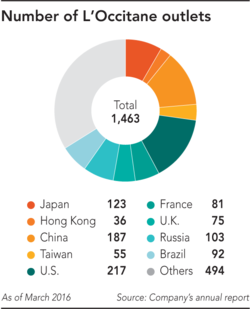 "So you have to be very selective," said Hoffmann, justifying his enduring confidence in physical stores. The group will slow down its expansion in major cities like Beijing and Shanghai but continue to enter lower-tier cities where he believes there is room to grow over time.

Hoffmann talks of a learning curve for customers: A typical consumer in an emerging market starts out buying make-up products like lipstick and foundation, with facial care their primary concern. Then he or she will move on to body care and toiletries like body washes and hair products, which have been a bigger focus for the group. "As they start to shift, we believe our revenue will grow up in those stores in third-tier cities," he added.

L'Occitane is also expanding in Southeast Asia. With close to 80 stores in countries like Brunei, Indonesia, Malaysia and the Philippines, the group is riding on the region's burgeoning middle class whose appetite for branded goods is rising. By the end of this year, it is opening its third boutiques in both Myanmar and Cambodia with local partners. In South Asia, the group will launch its first shops in Sri Lanka and Pakistan later this year.

South and Southeast Asia are "not a small part of our business," said Hoffmann, referring to a revenue split of 25% for South Asia and 75% for North Asia. "They're small markets today, but they are important markets."

INDIAN CONUNDRUM India is a notable exception, however. The world's second-most populous country should be an ideal market for retail business, but many global beauty brands have had a hard time there. L'Occitane has about 10 stores in cities including New Delhi, Mumbai and Kolkata, but its scale has lagged behind markets of comparable size. "It's no comparison [with China]. India still has a lot of room to catch up," said Hoffmann. 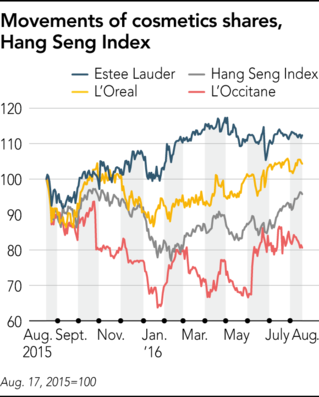 One reason is that heavy duties on foreign goods have prompted Indian consumers to shop elsewhere, such as in Dubai and Bangladesh. Others would rather buy products in bulk from local brands.

While the premium sector remains small in India, L'Occitane stresses the strategic importance of remaining in the market. "In the long term ... any country with more than a billion people has to be a market where you would want to be present," said Hoffmann, adding that the group would like to accelerate its investment there if market rules change.

Despite its sprawling sales network, L'Occitane's stock performance tells a different story. The retailer's nearly $3 billion market capitalization is still dwarfed by the $109.6 billion of market leader L'Oreal and that of regional beauty rivals, including the $10.9 billion of South Korea's AmorePacific Group.

In 2010, L'Occitane became the first French company to list on the Hong Kong stock exchange with a $700 million initial public offering -- a move that prompted global consumer brands like Prada and luggage retailer Samsonite to follow suit. Today, however, its shares are barely above its IPO level. In fact, they have lost about 13% from a year ago, underperforming a 2% gain of Hong Kong's benchmark Hang Seng Index. CLSA slammed the stock with a "sell." Mariana Kou, a consumer analyst at the brokerage, attributed its underperformance to a single-brand focus and hefty investment required for diversifying its flagship L'Occitane brand. Marketing expenses rose 23% last year and about one in 10 dollars from its net sales was spent on promotion.

The group has stepped up efforts to promote newer brands like Melvita and L'Occitane au Bresil -- a more affordable brand targeting the average Brazilian consumer. By 2020, it expects emerging brands to account for 10-15% of its overall sales. Calling the target achievable, CLSA's Kou said: "I wouldn't be too worried about over-investment into e-commerce, but [rather] the margin pressure coming from growing the smaller brands."

EURO ISSUES A weaker euro could well be a catalyst for L'Occitane, which has the bulk of its production costs denominated in the currency, but which generates most of its revenue overseas. Currency swings after the U.K.'s June referendum vote to leave the European Union have also complicated its pricing strategies elsewhere.

Asked about the impact of a stronger yen after Brexit, Hoffmann said the group has been cautious about a pricing adjustment in Japan so as to uphold its brand image. "It's very hard to yo-yo," he said. It is not only that cutting prices may hurt the "premiumness" in Japan; raising prices once the currency weakens is also difficult. "There is not yet inflation in Japan where customers can easily accept strong pricing increases."

Others are slightly more bullish about the group's longer-term prospects. "Keep in mind that with all the macro headwinds like Brexit, nobody did well. I don't expect L'Occitane to be immune to these things given its global play," said Jamie Soo, an analyst at Daiwa Capital Markets. "Its three-part strategy -- store revitalization, e-commerce and growth of its emerging brands -- is how we'll see growth kicking in the next few years for L'Occitane's top line," he added.

Meanwhile in Tokyo, the finishing touches are being put on the digital store. L'Occitane hopes that the revitalization project will increase foot traffic by double digits and bring the new breed of millennial customers, born between 1980 and 2000, closer to the brand.

"Millennials tend to select or deselect the information they read. They don't want to waste time reading about things they deselect, but will go deep into the topics they do select," said Kazuki Nishiguchi, the group's president in Japan.

And that is not all. L'Occitane said it could roll out its digital store across Asia, depending on market reaction in Tokyo. The group would not reveal how much was spent on the store, but said that with a smaller investment, it could start to place virtual reality headsets in Asian stores.

"The beauty of digital is that it can be reproduced easily," said Nishiguchi.

If that happens, Asian consumers across the region could soon be sampling a fragrant virtual experience of Provence.