PARIS -- Groupe PSA is accelerating its drive to rebuild its business in China, which has fallen into the doldrums as the major French automaker has been dragged into price-cutting competition. The company, formerly called PSA Peugeot Citroen, will release a sport utility vehicle to tap into growing demand in China, as part of its efforts for a turnaround in the world's largest automobile market.

The expanding auto market in China is growing more important to PSA from the viewpoint of dispersing risks now that it has increased its presence in Europe due to the recent acquisition of General Motors' German unit Opel Automobile.

In the January to July period of 2017, PSA incurred a 47.4% year-on-year drop in new car sales to 174,500 units in China and Southeast Asia. Sales data in the geographical segment mainly represent new vehicles sold in China. CEO Carlos Tavares is accelerating reforms at PSA after the acquisition of German carmaker Opel.   © Reuters

PSA has tied up with Chinese automakers Dongfeng Motor and Changan Automobile in China. Unit sales of PSA in China decreased 16% in 2016 from the previous year, and the contraction has grown sharper this year.

Announcing PSA's business results at a press conference in July, CEO Carlos Tavares said they are unsatisfactory and pose a major problem for the carmaker.

The poor business showing in China is the result of PSA losing its market share in the country through price-cutting competition.

Demand for automobiles in China, stimulated by tax breaks for small cars, has run its course. According to the China Association of Automobile Manufacturers, new car sales in the January-June period increased 3.8% from a year earlier to 13,354,000 units, logging a gain smaller than the first half of the single-digit range for the first time in two years.

While Chinese automakers are cutting prices under the circumstances, PSA has failed to reduce costs enough to compete on price. Some analysts point out that the French automaker is unable to keep up with the competition as it has yet to establish an extensive network of dealerships and other sales outlets.

Its weak showing in China is also due to PSA's lagging behind rivals in releasing SUVs and other models popular with local consumers. While Chinese maker Geely Automobile keeps faring well by expanding its lineup of SUVs, PSA's sedans are seen as expensive and cramped.

PSA is thus set to release SUVs and other models that are in demand among Chinese consumers. It has decided to introduce a new model each year under its upscale DS brand from its joint venture with Changan Automobile. 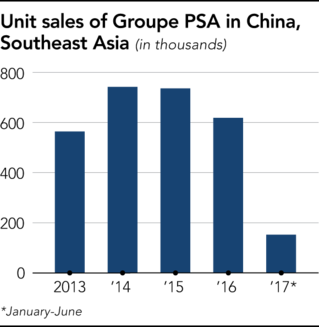 The DS brand includes a plug-in hybrid vehicle, with appeal increased environmental consciousness. It will be produced at a plant in Shenzhen, Guangdong Province.

The French automaker will also cut costs and streamline operations in the process from plants to the sales network. The French financial newspaper La Tribune reported that PSA will carry out an extensive review of its marketing strategy, including the realization of a balanced inventory level and replacement of dealerships.

Tavares, who took his current post in 2014, is credited with pulling PSA out of the financial trouble it fell into in 2012 following the European sovereign debt crisis. The company was mired in the red for three years in a row.

Tavares, former chief operating officer of French automaker Renault, reinforced the financial base of PSA through investment from the French government and Dongfeng Motor.

In addition, he realized steep cuts in the cost of parts procurement and other operations by clarifying DS, Peugeot and Citroen as premium, middle-price and low-end brands, respectively, and narrowed down the groupwide lineup.

Under the leadership of Tavares, PSA has also expanded its business to China, Latin America, Russia and other markets in a bid to make up for a delay the globalization of operations.

The reform initiative taken by Tavares is bearing fruit despite weak results in China. In the first six months of this year, PSA chalked up a net profit of 1.256 billion euros, up 4% from a year earlier. The automobile division boosted its operating profit by 7.3% in real terms.

"This is the best number that the company has ever achieved," Tavares boasted at the July press conference in reference to the automotive segment's profit gain.

With the acquisition of Opel, PSA has become the second largest carmaker in Europe and a closer rival with Volkswagen of Germany.

The Chinese market accounts for an overwhelming portion of Volkswagen's business, and as a result Tavares will continue to be tested for his reform initiative at PSA.