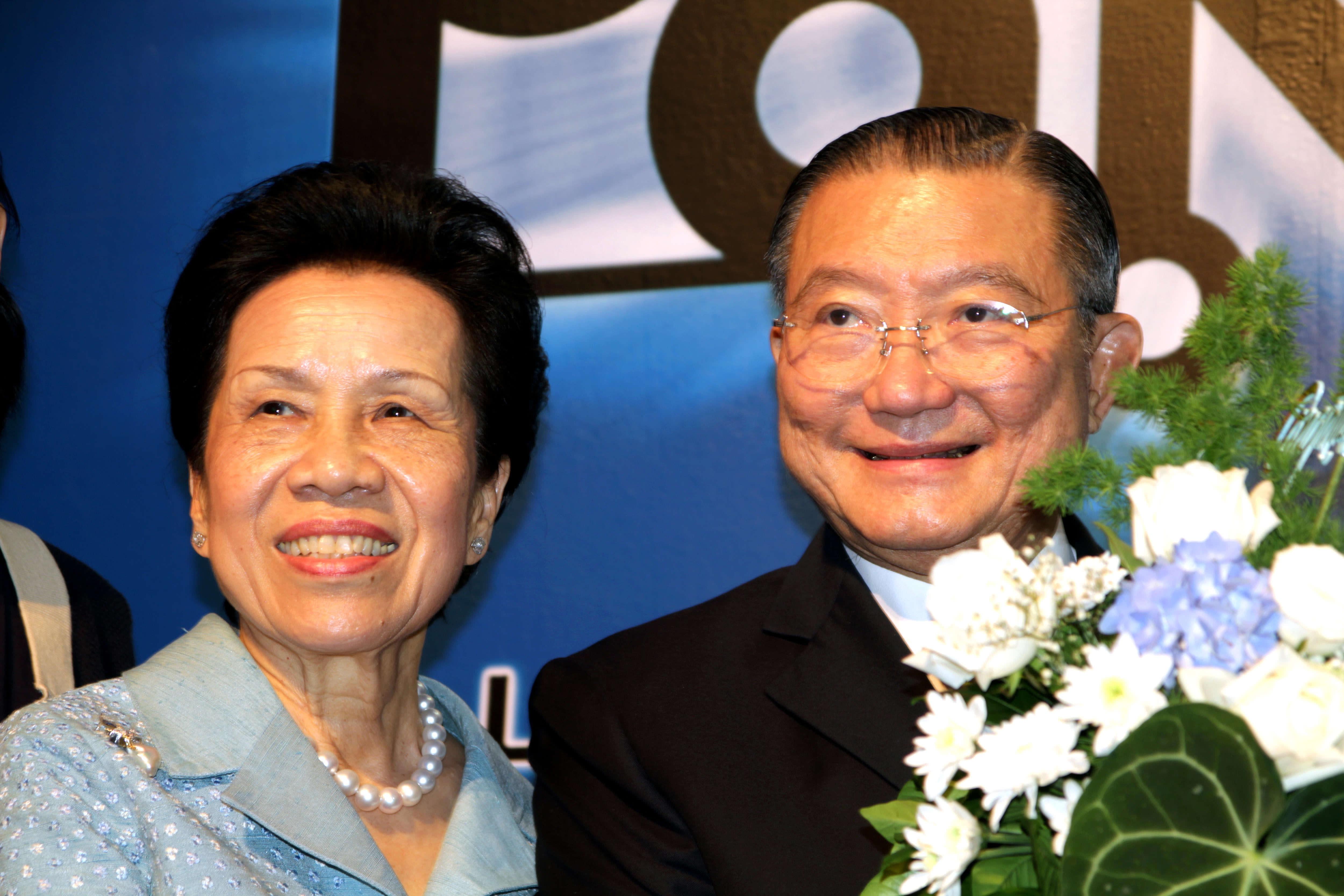 BANGKOK With deep pockets from his extensive beverage and property businesses, Charoen Sirivadhanabhakdi, the self-made billionaire behind popular Thai beer Chang, is widely regarded as Thailand's king of mergers and acquisitions.

He confirmed that reputation when Thai Beverage, the flagship business in his TCC Group, emerged as the sole bidder for Sabeco, Vietnam's biggest brewery and the producer of Saigon Beer, in a state-run auction last December. The hefty price of $4.8 billion set by the Vietnamese government discouraged other global names from even placing bids.

Saigon Beer controls around 40% of Vietnam's beer market and is the latest jewel in the TCC Group's crown. At home in 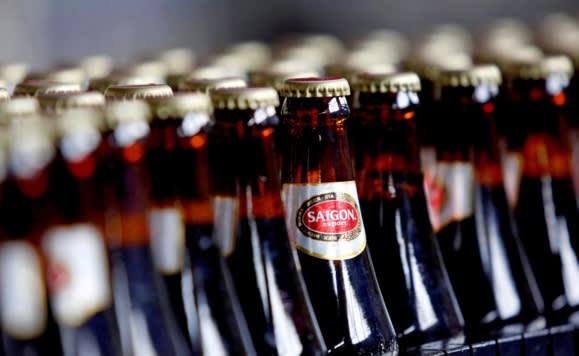 Bottles of beer move along a production line at a Sabeco factory in Hanoi.   © Reuters

He has lately shown a keen interest in Vietnam, with its youthful population of 90 million. TCC acquired the Vietnamese subsidiary of Metro, a German cash-and-carry chain, in 2015. In 2016, when the government divested holdings in Vietnam Dairy Products (Vinamilk), the leading dairy company in Vietnam, F&N raised its 11% stake to nearly 20%.

Outside of Asia, the group owns whisky distilleries in Scotland of such well-known brands as Old Pulteney. Charoen is also involved in English soccer. He once tried but failed to acquire Liverpool, while Chang has sponsored Everton since 2004, with its logo emblazoned on the team's uniforms. Charoen generally avoids the media and keeps out of the public eye. In a rare encounter with reporters in 2012 at the opening of a bottling plant in Vietnam, he spoke of providing Vietnamese consumers with value for money. "We must try to provide as many product choices as we can," he said. "And it must be the product that the people of Vietnam truly want, not something pricey." In the interview, he also touched upon Sabeco, expressing an interest in building "a stronger partnership." A THIRST FOR GROWTH With a net worth of $19.3 billion, Charoen was ranked No. 2 after Dhanin Chearavanont, executive chairman of agribusiness conglomerate Charoen Pokphand Group, in a list of Thailand's richest people published by Forbes magazine in 2017.

The son of a street vendor who sold hoi tod -- mussel pancakes -- in Bangkok's old Chinatown, it is perhaps not surprising that Charoen became involved in the food and beverage industry. After leaving school at a young age, he became a street vendor and later a supplier to distilleries.

When the government liberalized the liquor industry in the late 1970s and early 1980s, Charoen obtained licenses and began producing SangSom rum. He later merged his operations with a distillery producing Mekhong, a government-owned brand. Both brands, known for pairing well with Thai food, remain popular.

The 73-year-old Charoen has steadily expanded his business through M&As and partnerships. He entered the beer industry in 1993 when he was licensed by Denmark's Carlsberg to produce and distribute its beer in Thailand. The partnership provided Charoen with know-how in beer production, and two years later he launched his own brand, Chang, which means "elephant" in Thai.

At the time, the Thai beer market was dominated by Boon Rawd Brewery, which produced the popular Singha beer. But Chang sold for less, and by 1998 it had taken the lead with a 54% market share. In 1999, Boon Rawd filed complaints with the Office of Trade Competition Commission claiming that Chang was using its dominant spirits distribution network to price its beer at unfairly low levels. No penalties were imposed. A man reaches for a bottle of Chang beer at his shop in Bangkok.   © Reuters

Chang still outsells Singha, but it has been overtaken by Leo, a cheaper beer later released by Boon Rawd.

Charoen's hunger for expansion has led to more than a few conflicts. A bitter legal dispute followed after Carlsberg announced in 2003 that it was ending its partnership with Chang and removed all Chang executives from the joint venture. Carlsberg claimed that the value of assets Chang intended to transfer to the venture did not match the value of those transferred by Carlsberg and that it was impossible to build "constructive cooperation on a reasonable basis."

When Charoen consolidated all of his alcohol businesses into Thai Beverage and announced plans to list it on the Stock Exchange of Thailand, he faced a fierce backlash from Buddhist groups around the nation. These groups argued that the imperative to increase profits after the listing would encourage more alcohol consumption in the Buddhist country. Thai Beverage was forced to list on the Singapore Exchange instead.

ROYALTY FAVOR Like many Thai tycoons, Charoen is ethnic Chinese. His forebears are from Shantou, Guangdong Province, as are those of CP Group's Dhanin. Both men were educated in China and speak the language.

TCC Group's China connections are less obvious than those of CP Group, which has numerous investments there. Charoen has strong ties with the Thai establishment and is a staunch royalist. Charoen's surname was granted by King Bhumibol Adulyadej in 1988. One of the benefits of acquiring Berli Jucker was gaining the company's garuda -- a much-coveted royal award given to favored businesses, including restaurants, conglomerates and banks. Later, in 2013, Thai Beverage was also granted a garuda.

Like many large Thai businesses, TCC Group has vast financial reserves in its land holdings and properties controlled by unlisted entities. In 2014, according to the land department, TCC Group was by far the largest private owner of land in Thailand, with some 100,800 hectares -- an area equivalent to two-thirds of the total area of Bangkok. 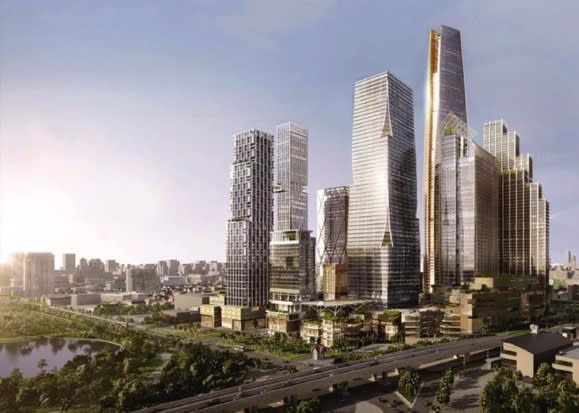 The planned One Bangkok redevelopment project, rendered here, is among many new projects on land owned by the Thai monarchy.

TCC Group has diversified into real estate, owning and operating shopping complexes, hotels and entertainment facilities. Its latest project, One Bangkok, is a mixed-use complex expected to cost a total of 120 billion baht ($3.72 billion), which would make it the nation's largest-ever private development project. Covering 167,000 sq. meters, the project sits on land owned by the Crown Property Bureau that was once home to the Armed Forces Academies Preparatory School. It enjoys a prime location at the junction of two of the city's most important thoroughfares, Witthayu (Wireless) Road and Rama IV Road. Moreover, four out of the five major projects along a 4km stretch of Rama IV Road belong to TCC Group.

Phillip Securities estimates 36 billion baht in loans will be needed to fund Thai Beverage's recent acquisitions, which apart from Sabeco include a pair of distilleries in Myanmar. Few analysts doubt the solidity of Thai Beverage's finances, however. As one noted, the company owns 28% of Frasers Centrepoint in Singapore through a wholly owned investment company. "If Thai Beverage decides that its debts are too high, it can repay loans by selling the stake to group affiliates," the analyst said. 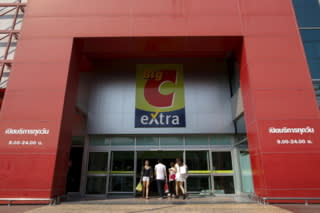 Still, Moody's Investors Service said on Dec. 20 that it will place Thai Beverage's long-term credit rating "on review for downgrade" in light of the Sabeco deal. "Although we had expected acquisitions to form a key part of ThaiBev's corporate strategy, the size of this transaction is significant, particularly when combined with its recent debt-funded acquisitions in Myanmar and Thailand," said Annalisa Di Chiara, vice president and senior credit officer of the rating agency.

Many of TCC Group's food and beverage businesses are listed, but none of the companies dealing with real estate or financial operations in Thailand have gone public.

Nevertheless, market players appear to be more concerned about the short-term impact of the huge investment in Sabeco. Thai Beverage shares slipped 6% in the week after the Sabeco deal was announced.

FAMILY MATTERS As with other large family businesses in Thailand, succession is a looming issue for TCC Group. But while many Thai tycoons of Charoen's generation have gained fame and wealth by expanding existing family business, Charoen is credited with building his own empire from scratch, with much help from his wife, Wanna Sirivadhanabhakdi, who is said to be actively involved in the business.

Charoen still sits at the top of the group, but day-to-day operations of the various business segments are in the hands of his five children and their spouses. 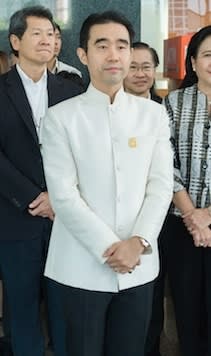 Thapana, Charoen's third child and elder son, steers the food and beverage business as chief executive of Thai Beverage. The property business TCC Land is headed by Charoen's second daughter and her husband, while development projects such as the multibillion-dollar One Bangkok complex is being overseen by his younger son, Panote.

The Southeast Insurance and Finance Group, TCC's financial arm, is under Charoen's eldest daughter and her husband. Trading house Berli Jucker, which acquired the Big C supermarket chain, is headed by Aswin Techajareonvikul, the husband of Charoen's third daughter. 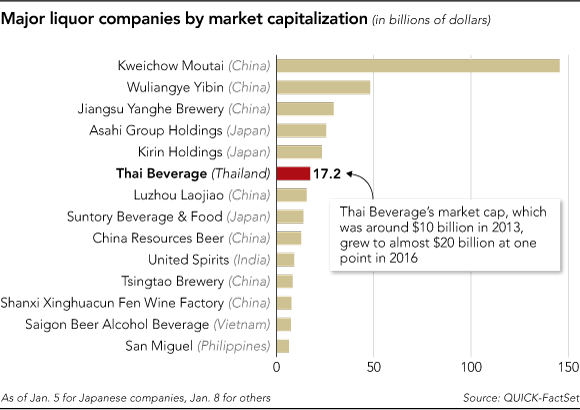